It sure sounds like it from where I sit.

On Sunday, the once-and-forever Meathead took to Twitter where he assailed the president as a “mentally ill sociopath” with a “f*cked up psyche” (redacted here) and urged “GOP patriots to stand up and end this sickness.”

Since “GOP patriots” in liberal-speak is synonymous with “bitter clingers,” one could easily construe from Reiner’s remarks that the “end” he has in mind is murder.

How much longer do we have to put up with a mentally ill sociopath? When the fucked up psyche of the leader of the free world comes before the horrific deaths of innocent children, it’s time for GOP patriots to stand up and end this sickness.

A day earlier, Reiner fixed the blame for the slaughter of children by guns not on Trump’s “f*cked up psyche” but on the National Rifle Association, which he implied is pulling the president’s strings.

There are 21,000,000 reasons why Donald Trump refuses to protect our children from being slaughtered by guns. The NRA has deep pockets. But we will show them that our hearts and our pockets are deeper than theirs.

Last August he extended Trump’s list of crimes to vehicular homicide. He was referring to the death of a woman protesting white supremacists in Charlottesville after she was struck by a car backing up at extreme speed. Said Reiner:

Well, this is like, a person died today, and so, he didn’t shoot him, but you could consider him an accessory, in a sense, because he’s been stoking this stuff for years! So unless he comes out in a full-throated condemnation of what we saw today, then, and risk losing these people, then he’s not the president of what we know as president of the United States [sic].

To recap, a woman attends a counter-protest of her own volition and is killed by a demented driver — and somehow that’s Donald Trump’s fault because he supposedly supports the demonstrators the woman was there to protest.

It’s worth noting that Reiner made this brilliant observation after the president condemned the white supremacists who had gathered.

If you’re wondering the justification for devoting a column to the ravings of an uninformed Hollywood liberal, consider that Reiner has 334 thousands followers on Twitter. Clearly some people give a rat’s behind for what he says. 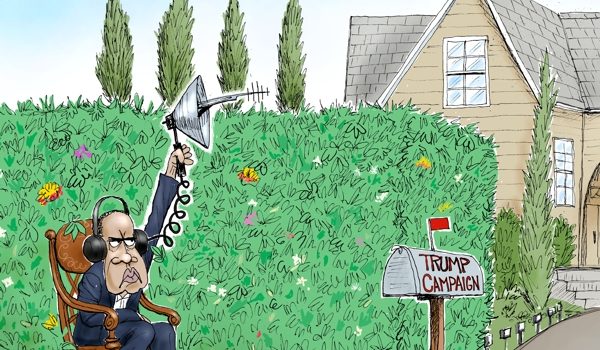 Cartoon of the Day: Bushwhacker
Next Post
CBS to John Podesta: How did Russians know to focus on purple states, but Hillary didn’t?