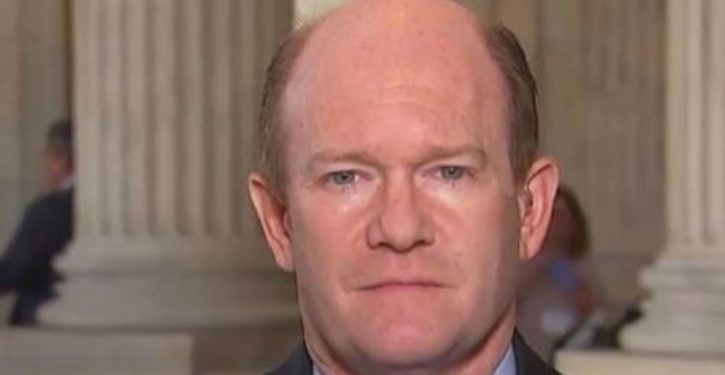 Democratic Senator Chris Coons blamed President Donald Trump for the Senate’s failure to pass immigration reform Friday and said his public opposition caused each the debate to go down in flames.

“President Trump said that he wanted to address dreamers. He created this crisis in September by taking away their legal protection and setting a deadline of March 5th,” Coons said on CNN’s “New Day.” “He said he would welcome a pathway to citizenship for dreamers. And I worked hard to get a bipartisan bill introduced in the Senate with my friend John McCain, a Republican who represents a border state.”

The Delaware senator said if Trump had stayed on the sidelines and not shared his opinion, the bill he crafted would have gotten 60 votes.

“We got 52 votes, but because of the president’s active lobbying against our bipartisan bill, we did not get 60,” Coons said. “The only thing that got 60 votes in the Senate yesterday, Alisyn, was the rejection of the president’s endorsed bill by Senators Grassley and Cotton. It only got 39 votes. 60 senators and only one of the border state senators, 60 senators voted against it. Only 39 supported it.”

Coons placed blame for the Senate’s failure squarely on the White House and the Department of Homeland security, accusing them of spreading lies about the contents of the legislation.

“Why we can’t get this done is clear. It was active lobbying by the president and the Department of Homeland Security that spread falsehoods and misleading statements against the compromise bill, that two dozen of us worked very hard to get to the floor yesterday,” Coons concluded. “That compromise bill which gave the president what he wanted on border security got 54 votes. Without his active opposition, it would have gotten 60.”

Dem Rep. Jerrold Nadler warns any threat to remove Mueller will be seen as attempt to aid Russians
Next Post
The inane strategies for preventing more Parklands begin pouring in from the Left