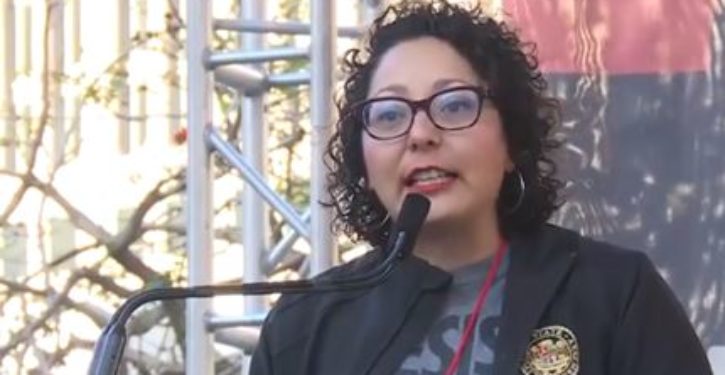 Oops. A female California assemblywoman who earned national acclaim for her advocacy of the #MeToo movement has found herself on the receiving end of accusations of sexual misconduct.

Cristina Garcia, whose picture appeared on the cover of Time magazine last December in connection with a story on “Silence Breakers,” has been accused of groping a male staffer to another assemblyman and a lobbyist.

According to Politico, the staffer, named Daniel Fierro, said Garcia “cornered him alone after the annual Assembly softball game in Sacramento as he attempted to clean up the dugout. Fierro, who said Garcia appeared inebriated, said she began stroking his back, then squeezed his buttocks and attempted to touch his crotch before he extricated himself and quickly left.”

The lobbyist, who represents a major industry association, said that Garcia appeared to have been drinking heavily at a fundraiser hosted by Governor Jerry Brown for state Senator Josh Newman at the de Veres bar in Sacramento. He said he was heading out the door in part to avoid the assemblywoman — who had been increasingly “flirtatious” and had called him on a few occasions before for late night drinks which he repeatedly declined.

If the accusations are true, then Garcia is not only a sex offender but a hypocrite since she has claimed to know firsthand the indignity and trauma of being a victim of unwanted touching and has spoken out on the topic. “Multiple people have grabbed my butt and grabbed my breasts,” she told The New York Times. “We’re talking about senior lobbyists and lawmakers.”

Here she is sounding off, convincingly, at a rally:

The allegations against Garcia are now pending before the California assembly.