So far, the loudest voice to make the ignorant assertion that Donald Trump — aka the “first racist president” — singlehandedly engineered the government shutdown was that of Democratic Rep. Luis Gutierrez, who also accused the president of wanting to end not only illegal but legal immigration.

“It’s really about the color of your skin and the country you come from,” Gutierrez said during a fiery speech made at a MoveOn rally outside the Capitol Friday.

Taking a cue from Gutierrez, Hollywood leftist Rob Reiner on Sunday again imputed Trump’s and the GOP’s racism as the reason that they — and not the Democrats — permitted the shutdown to happen. Reiner tweeted:

Make no mistake, this shutdown boils down to one thing: RACISM. GOP frightened to death of the browning of America. They will lose this last big battle of the Civil War. Diversity is our strength.

I don’t know but amid all the discussion of the word sh*thole over the past week, the phrase browning of America strikes me as vaguely scatological.

As for who deserves the blame for the shutdown, Reiner and company are in the minority. The New York Times, the Associated Press, Bloomberg, and other mainstream media outlets have all fixed blame on the Democrats for refusing to pass a spending bill that contained nothing they opposed.

Sen. Chuck Schumer — who said in 2013 that a shutdown over immigration would cause “chaos” — is receiving the lion’s share of the blame, with many calling the shutdown the “Schumer shutdown.”

As for Reiner, his tweet genereated the usual mix bag of reactions — sympathetic from who drink from the same Kool-Aid fountain, appeals to reason from his critics:

Borders arent racist. Hard-working American citizens have a right to object to billions of tax dollars being spent on services for illegal aliens. They have a right to express concerns about the effects on our schools, communities, crime rates. Stop the racism accusations.

No unity in love of country and one another is and always has been our strength as a people since this great nation was founded. Where diversity appears to only have been dividing us ever since liberals and democrats decided to weaponize it for political gain and votes.

According to former military lawyers, Chelsea Manning cannot legally run for office
Next Post
Cartoon of the Day: #SchumerShutdown 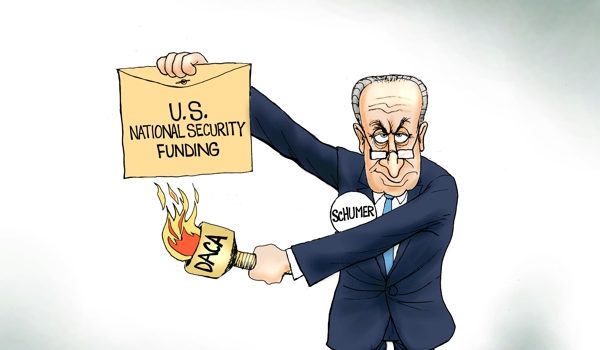