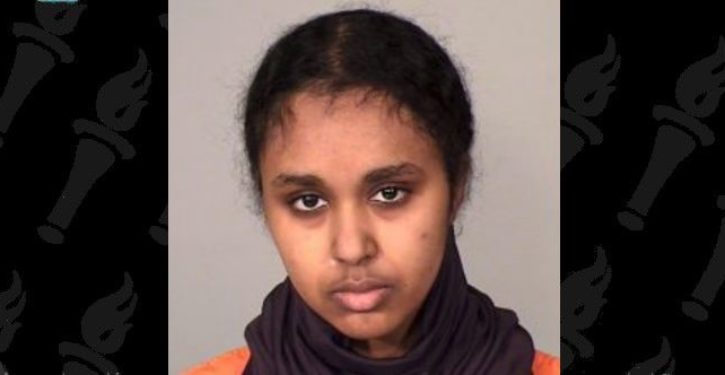 Why federal authorities aren’t investigating this as an act of terrorism is baffling considering that the assailant, 19-year-old Tnuza J. Hassan, of Minneapolis, was very clear about her goal, even telling police, “You guys are lucky that I don’t know how to build a bomb because I would have done that.”

Hassan, who is Muslim and intimated that her actions were payback for similar  attacks had occurred on “Muslim land,” set a total of eight fires Wednesday on the campus of St. Catherine University, using books, toilet paper, and sanitary napkins as tinder.

The first fire was reported at around 11:40 a.m. Hassan was arrested at 2 p.m. at an auditorium, where she had set another fire.

She was arraigned on Friday afternoon and charged with one count of felony first-degree arson. According to the Star Tribune, she arrived in court wearing an orange jumpsuit under a “makeshift hijab that consisted of a black face covering that exposed only her eyes and what appeared to be a large white sheet draped over her head.”

Bail was set at $100,000, and she was ordered to stay away from the campus and surrender her passport.

Court documents gave this account of the events and of Hassan’s motives:

She said she had been a student at Saint Catherine’s but quit last fall because she and her family were planning to vacation in Ethiopia. Hassan said she started the fires because she’s been reading about the U.S. military destroying schools in Iraq and Afghanistan and she felt that she should do exactly the same thing.

She said that her fire-starting was not as successful as she had wanted. She said the most successful fire she set was at Saint Mary’s [residence hall] where she set a couch on fire.

The complaint further noted that Hassan’s former roommates had received a letter from her containing “radical ideas about supporting Muslims and bringing back the caliphate.”

The motive, opportunity, and means are all documented. This woman is a self-radicalized lone wolf.

What are the feds waiting for?