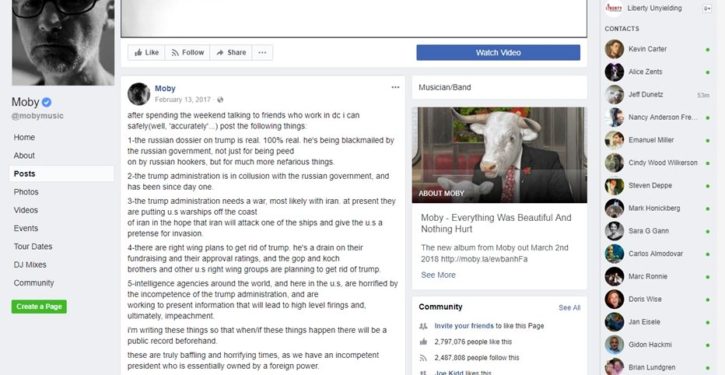 That’s my judgment.  That doesn’t mean Moby (the entertainment name of Richard Melville Hall, musician and producer) isn’t telling the truth.  It means there seems to be a lot of overinterpretation of what he may have been asked to do, and by whom.

Moby made a little wavelet back in February 2017 when he put up a Facebook post claiming to know for a fact that the “dossier” was “100% real,” and that Trump was being blackmailed by the Russians.

Moby learned this, back in 2017, by “spending the weekend talking to friends who work in DC.”

For comparison, a “Squeal Team 6” meme that Liberty Unyielding posts on Facebook about once every six months (because we all need a good chuckle from time to time) usually gets that many reactions and shares in less than a week. 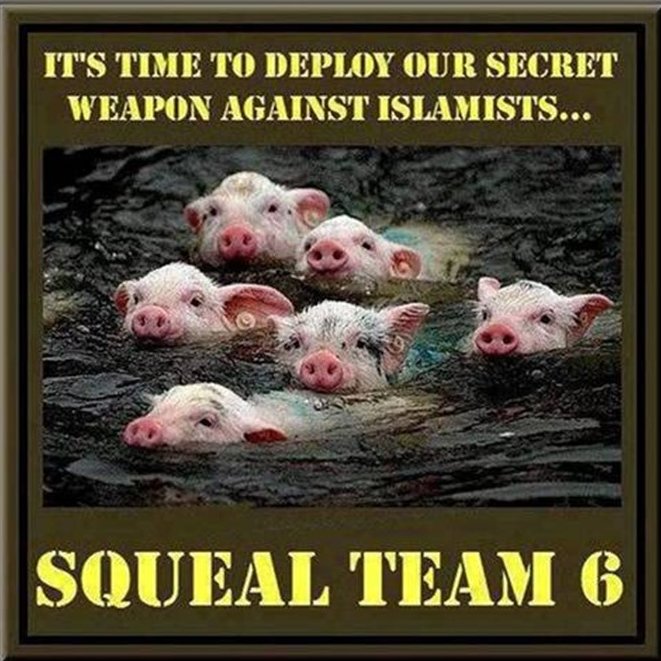 This is not to impugn Moby’s social media reach, but to put the particular post in context.  Between February 2017 and today, social media consumers haven’t been beating down the door to this post, in spite of Moby’s undoubted fame and high profile.  Worth noting as you judge why you haven’t heard of this before.

You’re hearing about it now because Moby talked about it in an interview with WFPK in Louisville, KY, posted at the station’s website on Friday, 12 January 2018.  (H/t: Pitchfork)  Drudge picked it up shortly thereafter.

Pitchfork referred to Moby’s disclosure as the CIA asking him “to spread the word about Trump and Russia.”  Moby’s own words, in the interspersed quotes, tend to leave that impression:

The producer/DJ said that “after talking to friends in DC,” he had allegedly learned that the Fusion GPS dossier was “100% real” and that the Russian government was “blackmailing” the president. Now, in a new interview with WFPK in Louisville, Kentucky, Moby has doubled down on his claims. …

Talking with WFPK’s Kyle Meredith, Moby cited “active and former CIA agents” who were “truly concerned” about Trump’s collusion with Russia. “They were like, ‘This is the Manchurian Candidate, like [Putin] has a Russian agent as the President of the United States,’” he said. “So they passed on some information to me and they said, like, ‘Look, you have more of a social media following than any of us do, can you please post some of these things just in a way that … sort of put it out there.’”

But we’re getting a little ahead of ourselves to ask, as John Hinderaker does at Power Line, if the CIA would really go to Moby and ask him to spread information around on social media.

The answer is actually that of course the CIA would do that, if there were some operational reason to.  The CIA probably didn’t do what Moby’s story seems to indicate, however.

If you read it carefully, it’s clear the CIA didn’t ask Moby to do anything.  Some “friends who work in DC” either are the active and former CIA personnel, or were the entrée to Moby’s being in such company during a weekend in February 2017.

The individuals, whoever they were, presumably acted on their own initiative, and were presumably lower-to-mid-level personnel in the hierarchy, at most.  (Analysts, not operators; if, that is, they were legitimate.  But we’re assuming they were.)  The information they passed on is garden-variety.  The bit about “putting U.S. warships off the coast of Iran” is artistic, but silly (cue the Pat Buchanan op-ed).

This sounds like some anti-Trump D.C. bureaucrats having an encounter with a celebrity, and making a spontaneous suggestion.  If, of course, it’s true.  But we don’t have to assume it’s untrue to understand that it doesn’t mean anything about the CIA, what it thinks, or any intentions it has had as an institution in the last year.

Should someone from the FBI (not Peter Strzok) interview Moby about this and find out if there’s anything more there?  Sure. I wouldn’t go to general quarters over it, but might as well check the block.

Much as I love that this data point is out there in the universe, however, we’d need more than this to draw any freshly freighted conclusions about the fever swamp at Langley.