As Congress prepares to vote today on the tax reform bill that, if passed, will give President Donald Trump his first major legislative victory, CNN gives its readers a boatload of reasons why they should despise the legislation and the “salesperson-in-chief” responsible for it.

The article is a disjointed hash of data points from a newly released network poll, and allegations based on them — some directed at the bill, some at the president, some at both. For example, there is this bullet point contained within a video montage:

I’m not sure how in the absence of Trump’s tax returns, CNN can posit that the bill “will almost surely benefit” him or how there is a fact to check anywhere in that assertion. Maybe this is the kind of “fact” CNN had in mind when they rolled out their new “Facts first” slogan.

Within the body of the article is a paragraph devoted to the administration’s priorities (which include passing tax reform) vs. those of the American people. Here we learn that “10% cited infrastructure improvements in the poll conducted Thursday through Sunday, before a train derailment in Washington state Monday morning.” Notice how author and CNN Polling Director Jennifer Agiesta cleverly worked in yesterday’s train derailment as a further indictment of Trump, whose inattention to infrastructure is bound to kill more hapless Americans.

Two problems: First, Trump has pledged to spend $1 billion on infrastructure. Second, and more importantly, Monday’s train derailment in Washington state was not the result of crumbling infrastructure but human error: The train was traveling 80 miles and hour in a 30 mile-per-hour zone.

There’s more — much more. Indications of how polarized the nation is (does anyone at CNN remember the past eight years?) and the divergence in opinions of the plan based on party — in no small part due to CNN’s own propagandizing.

The article also notes that Trump’s approval rating is 35% at a point where other first-time presidents have had ratings of 49% or higher. That has nothing whatsoever to do with the topic at hand, but I suppose it’s a statistic that CNN just never gets tired of citing.

Alan Dershowitz: ‘Rod Rosenstein should recuse himself
Next Post
Cartoon of the Day: Scrooged 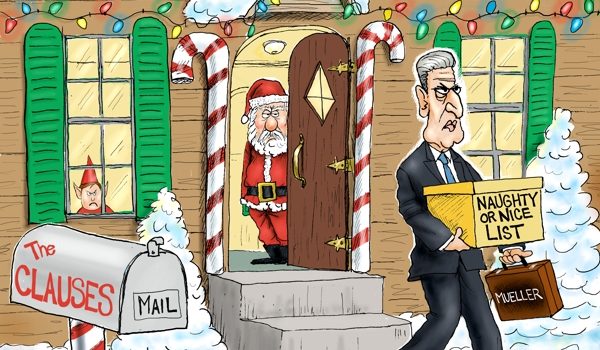