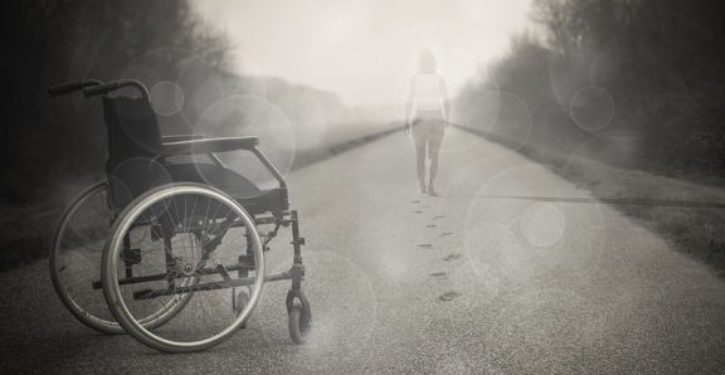 One of the downsides of monitoring news stories, especially in the current era, is the need to remain vigilant for tales that in an ideal world wouldn’t exist: Think abortion, mass murder, war, genocide, poverty, corruption, and crime, just to name a few topics.

A post on Chinese social media site Weibo explains what the show is all about:

In the Netherlands, a TV show revolving around ‘the end of Down syndrome’ was recently aired on national television. The series, that was titled ‘The Last Downer’, explored what society loses if Down syndrome disappears. It also talked about the ethical, social and psychological consequences of having a child with Down syndrome.

The show follows a Dutch man with Down Syndrome, and in the scene that follows he meets with a government official to learn just how much he costs society. The official, using a blackboard, goes through the process of computing a human being’s worth as though he were adding the cost of groceries in a supermarket checkout line. Then he explains how much less a “normal” person costs to care for.

So much for the compassionate Left!

If you didn’t have the stomach to watch the video, here’s a brief synopsis of the scene via Aleteia.org:

… [W]e watch as Sjoerd, a man with Down syndrome, is told precisely what he and his similarly-chromosomed friends are costing Europe, in hard dollars and cents: $48,000 Euros, per “Downer” per year.

Sjoerd’s companion says, “That is a considerable amount, but it is high when compared to “normal” persons?

“So you could say that Sjoerd is almost 10 times as expensive than we are. … Is there another group in the Netherlands that approaches that amount?”

Oh, yes. If you look at elderly people with dementia, living in facilities, “you will come to see these numbers.”

There’s only one reason. Socialism.

As western Europe has embraced socialist-styled healthcare, it has run up against the problem of rationing and expense. There are simply too many people and too few dollars to care for everyone all the time. It’s why in Canada a woman can wait months for a screening to rule out breast cancer, and in the UK it can take weeks before a patient with debilitating pain is seen by a dentist. There just aren’t enough doctors or dollars to care for everyone’s problems.

A few years ago, Sarah Palin cut right to the heart of the matter when she railed against the possibility of Obamacare and targeted the most disgusting flaw in the socialist healthcare scheme: the so-called “death panels.” Liberals mocked her, the media dismissed her, and yet this is exactly what we see throughout the Western world today.

As for “The Last Downer,” Princeton legal scholar Robert P. George was horrified by the video and tried to remind the Dutch of their own painful past.

My God! People! People!!! Do you not see where this goes??? Do the Dutch, who suffered under–and in many cases heroically resisted–Hitler’s domination, forget that the “final solution” began with the dehumanization and eugenic killing of the handicapped? https://t.co/2blq0OXGzL

It is horrific, but it’s the only possible outcome for a socialist society. There is only so much money to go around. This means that some sacrifices have to be made, and the people forced to make them will be the ones who “cost the most” for society to maintain. The weak, the infirm, the poor, the unwanted, all innocent of any crime but deemed too costly by socialism’s brutal standards.