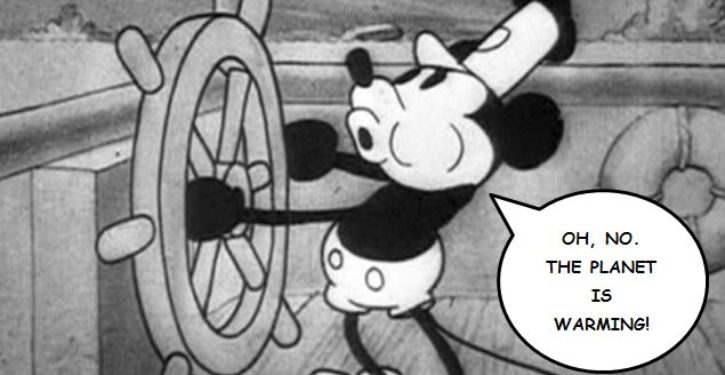 Officials at entertainment giant Disney were frustrated and annoyed that the Obama administration was considering exploiting some of the company’s beloved cartoon characters to sell kids on climate change, according to a report Tuesday from The Hill.

Robert Papp, a former State Department official, discussed the possibility of using Disney cartoon characters to teach children about a possible climate apocalypse. Company officials told Papp in 2014 that Disney characters should not be used to harangue people about global warming.

“We felt Admiral Papp misrepresented the informational meeting that was held at Disney in October of last year,” a Disney employee wrote to the State Department in 2015, according to documents The Hill obtained via a Freedom of Information Act Request.

The name of the official writing the email has been redacted. Paul Baribault, the senior vice president of marketing for Disney, met with Papp in November of 2014 to discuss using Olaf the snowman from “Frozen” for climate messaging.

“It is frustrating to see these types of comments continue,” the Disney employee wrote in a March 2015 email to Erin Robertson, a State public affairs official who worked for Papp, the State Department’s envoy for the Arctic. The Disney employee reiterated his concern about Papp’s still telling reporters that State was discussing using Olaf and others for strategic purposes.

“It’s too bad he felt the need to say that he’s continuing discussions with Disney when that simply hasn’t been the case,” the employee said in the email, referring to Papp’s decision to praise “Frozen” during a January 2015 event in Norway for teaching children about the Arctic.

I said, ‘You’ve taught an entire generation about the Arctic,’. Unfortunately, the Arctic that you’ve taught them about is a fantasy kingdom in Norway where everything is nice. What we really need to do is educate the American youth about the plight of the polar bear, about the thawing tundra, about Alaskan villages that run the risk of falling into the sea because of the lack of sea ice protecting their shores.

Papp dismissed the idea that he continued stoking the storyline despite Disney’s disapproval.

“This is an old (very old and tired) story that I believe was misrepresented in the press,” he said, adding that he approached company officials with the idea and Disney ultimately declined because they didn’t want their characters to be used for negative purpose.

Disney and the State Department have not responded to reporters’ request for comment.

Obama also used his daughter’s asthma attacks to personalize the climate debate. Environmental groups have jumped on this bandwagon and claim global warming will make asthma and other respiratory illnesses much worse.