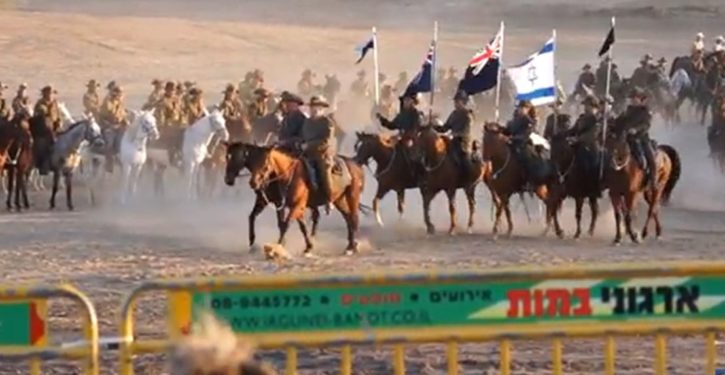 Commemoration of the ANZAC cavalry charge at Beersheba in 1917, staged on 31 Oct 2017. (Image: Screen grab of YouTube video)

A friend reminded me this evening, as we await President Trump’s address on Wednesday about the status of Jerusalem, that Trump’s policy announcement will nearly coincide with the 100th anniversary of the surrender of Jerusalem on 9 December during World War I.

The thought of writing one more post about the FBI’s Peter Strzok – whom I now think of as that damned, elusive Pimpernel; the guy who was apparently behind every questionable move made by the Bureau over the last 16 months – is just too discouraging.  So I’m glad to have something more interesting to think about.

All I really want to do about the 100th anniversary is make note of it.  It does seem like a rather remarkable coincidence that Trump will give his address on 6 December 2017.

One hundred years ago today (5 December here), British forces were closing in on Jerusalem, a force called “Mott’s Detachment” – of the 53rd Welsh Division – moving from Hebron to Bethlehem probing for Ottoman defenses.  General Mott, commanding the flanking protective force for the main body, was considered a bit of a pain in the neck, moving with “excruciating” caution and slowness.  His force mostly found the defenses abandoned, but did run into some guns that were still firing.  He didn’t want to destroy the priceless antiquities of the Holy Land in an ugly fight if he didn’t have to, and wasn’t willing to proceed too quickly, or expose his men unnecessarily.

West of the city, General Edmund Allenby’s main force, the “Egyptian Expeditionary Force” (EEF) of the XX and XXI Corps and the Desert Mounted Corps, had been fighting its way north from Beersheba since mid-November, and had launched a pursuit of the retreating Ottoman army into the Judean Hills about two weeks before the rain-soaked first week of December.

The pace of the battle for Jerusalem depended on how Mott took it, as he moved cautiously northward from Hebron.  The EEF spent the first four days of December improving battle positions west of Jerusalem, and would be the force that entered the city.  At one crucial point, Mott’s Detachment was out of position to cover the flank of a forward unit from the main force (the 60th London Division), which delayed follow-on operations.

But the delay wasn’t for long.  Battle was launched – such as it was.  Allenby’s main force descended on the city, poking the first boots in on the 9th.

Although the British command had a pretty good idea that the Ottomans were methodically pulling out, they didn’t yet know on this day, 100 years ago, that the surrender of Jerusalem would be offered by the city’s mayor, Hussein Salim al-Husseini, on behalf of the Ottoman governor less than four days later, on 9 December.  The World Heritage Encyclopedia offers this account:

The mayor of Jerusalem, Hussein Salim al-Husseini, attempted to deliver the Ottoman Governor’s letter surrendering the city to Sergeants James Sedgewick and Frederick Hurcomb of 2/19th Battalion, London Regiment, just outside Jerusalem’s western limits on the morning of 9 December 1917. The two sergeants, who were scouting ahead of Allenby’s main force, refused to take the letter. It was eventually accepted by Brigadier General C.F. Watson, commanding the 180th (2/5th London) Brigade.

Jerusalem was almost encircled by the EEF, although Ottoman Army units briefly held the Mount of Olives on 9 December. They were overwhelmed by the 60th (2/2nd London) Division the following afternoon.

Allenby entered himself on 11 December, in a formal foot march through the Jaffa Gate.

The (UK) Spectator has an archived article from 15 December 1917 with contemporary commentary on the fall of Jerusalem.  It’s a scanned and reproduced archive and requires a little interpolation to read; some of the characters are off, or missing.  But it’s worthwhile, for a sense of the feel of the event at the time, and the enduring power of the fate of Jerusalem to induce goosebumps.

Earlier this year, on 31 October, troops from Australia and New Zealand were in Israel to commemorate the Battle of Beersheba, in which their ANZAC Mounted Division had played a major role in 1917.

Soldiers from New Zealand performed a Maori haka while they were there.

1917 was an extraordinary year.  It’s one hundred years later, and Trump speaks on 6 December.  It will be interesting to hear what he has to say. 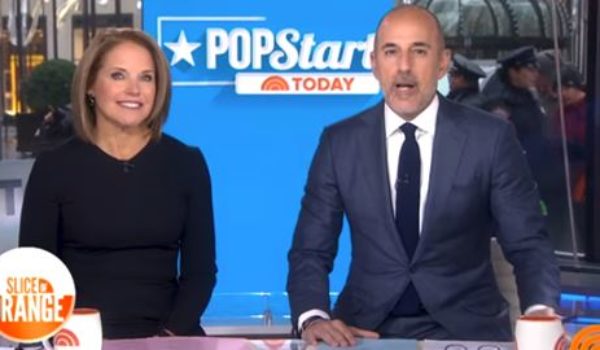