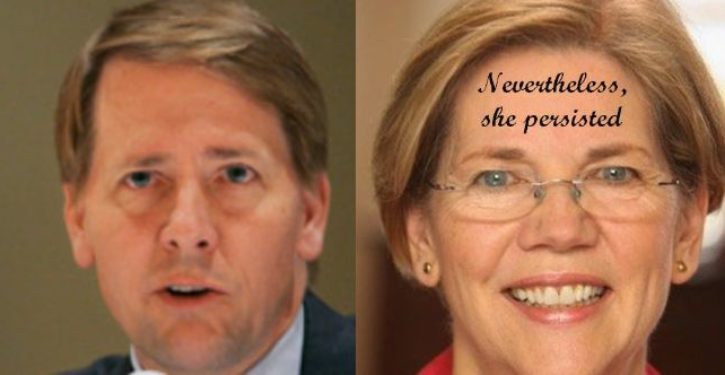 Leandra English, the acting director of the Consumer Financial Protection Bureau appointed by outgoing director Richard Cordray over the Thanksgiving weekend, has filled a key role during many of the crises that have gripped the six-year agency, according to a Daily Caller News Foundation investigation.

English was a key aide during the agency’s first, formative year in office, and she helped set up the agency with now-Massachusetts Sen. Elizabeth Warren as part of the Department of the Treasury’s “implementation team” that formed the bureau.

Cordray’s appointment of English appears to be an attempt to circumvent President Donald Trump’s authority to appoint the head of the CFPB.

The president, in turn, has appointed White House Budget Director Mick Mulvaney to serve as its acting head.

People know Mulvaney, but who is Leandra English?

TheDCNF spoke to current and former employees of the embattled bureau about English and the culture she had created in her various positions.

Many former and current CFPB employees told TheDCNF about their reactions to English receiving the acting director position.

“Her rapid ascension within the CFPB and the series of promotions seems consistent with the CFPB culture, which is full of cronyism,” said one long-time former CFPB employee.

“It was surprising because many hard-working employees had to file lawsuits and grievances just to get promoted one step at the CFPB,” the former official told TheDCNF in an interview.

English, along with Warren, spearheaded a culture of secrecy within the bureau that appears to permeate throughout the agency and would later infuriate Congress.

Warren and the Democratic Congress housed CFPB inside the Federal Reserve, which is independent of Congress.

The transfer of CFPB into the Fed allowed the bureau to circumvent congressional oversight. Even its annual budget is outside of the regular congressional budget authorization process.

Sources within the bureau say English actively promoted that effort toward secrecy early in the bureau’s actual operations.

Emails obtained by the conservative group Judicial Watch show that English established meetings without any notification to the public and meetings that specifically barred press.

English was involved, for example, in organizing an Oct. 27, 2010, meeting that was led by Warren, who is now the Democratic senator from Massachusetts.

The participants of that meeting included Consumers Union, the AFL-CIO, PIRG and the National People’s Action. It was closed to the press.

On Jan. 22, 2011, English helped CFPB hold another private meeting with Americans for Financial Reform, a pro-CFPB group with participants who constituted a Who’s Who of liberal activist groups.

On March 8, 2011, she arranged a private meeting with Bruce Marks, the president of the Neighborhood Assistance Corporation of America, a non-profit, community advocacy and home-ownership organization.

One of English’s first jobs also was as a special assistant to the troubled CFPB deputy director, Raj Date (pronounced Dat-tay). He served as the second-in-command at CFPB, reporting only to Cordray. “She was hand-picked by Raj,” another former CFPB employee said in an interview with TheDCNF.

But Date became a poster child for the “revolving door” between government regulatory agencies and regulated private sectors.

The deputy director left the agency in 2013 to start a new for-profit bank and mortgage “advisory firm.”

He also raided CFPB of many of its top officials as he founded a company he called Fenway Summer.

In 2013, Date hired away the agency’s chief of staff, its regulatory senior counsel, its senior adviser for mortgage servicing, and a senior counsel from its office of research, markets and regulation.

Iowa Republican Sen. [score]Chuck Grassley[/score] attempted to include a “revolving door” amendment to the Dodd-Frank Act, the legislation that originally established the CFPB, but Senate Democrats rejected it. Grassley said after Date had left the bureau, the agency had “a weak revolving-door policy that allows former employees to profit from their employment and advise firms with business before the agency could be harmful to consumers.”

The Washington Post reported that the agency staff eventually were divided into two camps, those who “tended to align as ‘Rich people’” and those who were “‘Raj people.’”

Rich was Richard Cordray and Raj was Raj Date. English was a known throughout CFPB as one of Raj’s “people.”

After Date left, English briefly left the bureau and joined the Office of Management and Budget and the Office of Personnel Management, but she returned in January 2015 to become CFPB’s deputy chief operating officer.

In that position, English had to contend with a massive agency-wide discrimination scandal at CFPB that had its roots during the founding of CFPB when she was part of the bureau’s management.

The liberal agency, it turned out, allegedly excluded racial minorities, women and those with ethnic nationalities from equal pay for equal work and from promotion.

An internal CFPB report shocked Congress when it concluded the bureau now-Sen. Elizabeth Warren set up suffered from a “toxic workplace.”

“I found that the general environment in [the CFPB’s)] Consumer Response [unit] is one of exclusion, retaliation, discrimination, nepotism, demoralization, devaluation, and other offensive working conditions which constitute a toxic workplace for many of its employees,” investigator Misty Raucci told the House Financial Services Committee in 2014.

A General Accounting Office survey released in 2016, when English was Deputy COO, reported that 25% of CFPB’s black, Asian, and female employees reported “they had been discriminated against at the CFPB.”

A quarter of the black employees and 20% of Hispanic employees told the GAO that racial “differences” are not respected or valued by the bureau’s top officials.

A current CFPB employee told TheDCNF racial and gender discrimination still persists at the liberal bureau. He asked for anonymity because he feared reprisals if he was identified.

“It manifests itself today through favoritism, such as who gets assignments, who gets opportunities, and who gets promoted,” he told TheDCNF, adding:

And if you file a complaint, there will be some people who will retaliate. They retaliate by saying ‘Oh, OK, your assignments will be curtailed, your expense vouchers will be scrutinized.’ You have no idea how it is there.

The current CFPB employee works at the division of supervision, enforcement and fair lending.

English also was deputy COO when the cost for the renovation of its headquarters skyrocketed from about $50 million to more than $200 million.

Melissa Heist, the associate inspector general of the Federal Reserve System, reported on July 31, 2015, that the CFPB renovation would officially cost taxpayers $285.32 per square foot, a price tag reserved only for the most luxurious “Class A” commercial office buildings.

D.C. may be the only place on earth where it is considered ‘reasonable’ for a federal bureaucracy to spend over $200 million to renovate a building it doesn’t own — a full $50 million more than the building is worth.

I doubt that my constituents back home, who are ultimately on the hook for this boondoggle, hold the same view.

Judicial Watch President Tom Fitton says that a constitutional republic should not allow a federal agency to appoint its own successor:

Nowhere else in a republican form of government would an agency be able to presume to appoint their own successor.

Maybe in an authoritarian form of government that might be acceptable, but not in a constitutional republic. So, the fact this is even an issue is a stark example of just how out of control the CFPB is.

This report, by Richard Pollock,

was cross posted by arrangement with the Daily Caller News Foundation.

France set to make ‘gender-based insults’ a crime
Next Post
Tweet of the Day: ‘My work here is done…I’m retiring from political commentary in all venues’