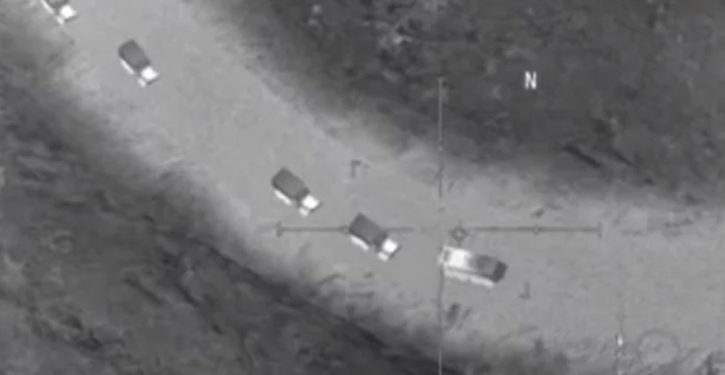 Is it ISIS being given tactical cover by U.S. forces in eastern Syria? No, it's the mobile phone game AC-130 Gunship Simulator: Special Ops Squadron. (Image: Screen grab posted by Russian Ministry of Defense; via UK Guardian)

There could hardly be anything timelier than a reminder that “evidence” is easily simulated.

Sometimes simulated evidence is assumed to have stood up to scrutiny because no one challenges it very hard.

Other times it is challenged immediately, and fails, very publicly, to withstand inspection.

For whatever reason, the latter is often the case with evidence offered by Russia.

The most recent case (that we know of) is from Tuesday morning, 14 November 2017.  Russia’s defense ministry accused the U.S. of providing tactical military support to ISIS near the Syrian town of Al-Bukamal: the outpost on the border with Iraq where Iran-backed troops are converging from both sides, Iraqi and Syrian, to evict ISIS for good from its former stronghold on the Euphrates River corridor.

Russia’s defence ministry said not only did the Americans refuse to carry out a joint operation to strike Isis fighters leaving Abu Kamal but also allowed them to regroup on coalition-controlled territory. Russia said the Americans actively interfered with Russian airstrikes, to provide cover for the Isis fighters.

“The US are actually covering the ISIS combat units to recover their combat capabilities, redeploy, and use them to promote the American interests in the Middle East,” said the ministry.

The problem is that the Russian defense ministry appended images to the official statement, which Web rangers quickly identified not only as not being from Syria, but as being from the Iraqi military (in Iraq) in 2016 – and even, in the case of one image, from a mobile phone game called AC-130 Gunship Simulator: Special Ops Squadron.

Conflict Intelligence Team, a group of Russian online investigators who factcheck claims by the Russian military, said that the other four of the five photographs appear to be taken from 2016 footage released by Iraq’s ministry of defence, depicting the Iraqi air force bombing Isis targets near Falluja.

The Russians deleted the information, but not before it was archived.  The defense ministry said the images were added improperly by a civilian employee (of course), and that they were looking into it.

Guardian points out that Russia’s defense ministry has done this before.

It is not the first time that the Russian defence ministry has tried to pass off footage of other events as its own. A scene in a documentary about Putin made by the US film-maker Oliver Stone showed Putin playing the director video footage on a telephone of what he said were Russian forces on operations in Syria. The footage appeared to be an exact match for old footage of US forces in Afghanistan.

After internet users pointed out the discrepancy, Putin’s spokesman, Dmitry Peskov, said the footage had been given to Putin by Sergei Shoigu, Russia’s minister of defence.

We’ll see if Shoigu can take the same bullet again and keep his job.

At least Shoigu wasn’t minister of defense on a previous occasion, in 2007, when Russian state media aired footage of what was supposed to be a submersible planting the Russian flag under the Arctic ice at the North Pole.

In that broadcast – as detected by an a Finnish teenager – Russia used footage of submersible operations from the 1997 Hollywood blockbuster Titanic.  The Guardian may not recall, a decade later, that it was on top of that story too:

It took an alert teenager in Finland with a Titanic DVD to spot the sham. Waltteri Seretin, 13, from Kemi, 450 miles north of Helsinki, recognised the images in the national daily Ilta-Sanomat.

“I was looking at the photo of the Russian sub expedition and I noticed immediately that there was something familiar about the picture,” he told the paper. “I checked it with my DVD and there it was right there in the beginning of the movie: exactly the same image of the submersibles approaching the ship.”

James Cameron’s film about the 1912 disaster, which starred Kate Winslet and Leonardo DiCaprio, opens with a scene of mini-subs diving to inspect the wreck of Titanic. In the Russian television report about the north pole, expedition, images from the movie were inserted seamlessly into real footage and bore an on-screen caption reading “northern Arctic Ocean”.

(Note: I remembered this because I linked to it in one of the earliest posts at my old Optimistic Conservative blog, in 2009.)

I don’t actually doubt that the Russians planted a flag under the Arctic ice in 2007.  That’s something they were capable of doing, and had the political motivation to do.

But it was something of an own goal for them to foul the announcement with bogus video footage, which analysts taking a second look also concluded was interwoven with scenes shot with models in a studio somewhere.  Why add “illustration” material that would just call the whole claim into question?

There was no reason, a priori, to doubt the Russian claim about planting the flag.  But a posteriori?  That’s a different…story.

All of this comes to the fore at a time when we can really use the tonic to clear our heads.  Just this week, for example, we learned that the FBI has been investigating the strange case of cash transfers made by Russia (through foreign banks) to some 60 Russian consulates abroad, each bearing the memo notation “to finance election campaign of 2016.”

I mean, come on.  Not even the Russians are that moronic.  Right?

Or maybe they are.  (See above.)  Or…maybe not.  Because who could be that transparently stupid?

The first person who says “Well, I don’t really know what to think about this” gets the kewpie doll.  Such healthy skepticism in the face of “evidence” that raises legitimate questions about its provenance is much wiser than staking out a hasty position.

And, gee, doesn’t that apply to a lot of things.  Melanie Phillips had an excellent post on Monday about the “cultural fascism” that seems to have descended in both the UK and the U.S., with precipitate races to judgment that wait for no man – and for no facts and no evidence.

It may very well be that Roy Moore is guilty of what he’s been accused of.  But from what I can tell right now, the evidence of that consists of statements that mostly can never be adjudicated in a court of law (only one complainant’s information, from the woman who was 14 at the time of the alleged incident, can ever be brought to trial).  The depths of idiocy to which the public sifting of “evidence” is descending are almost incomprehensible.  (Check out, if you can bear it, the tweet streams at the links in The Corner’s post.)

Meanwhile, the depths of hell seem to have opened to spew out a stream of society-wide accusations about sexual misconduct so relentless that our whole matrix of choices about what to believe has shifted.

Can it really be that every high-ranking, high-profile male in North America, across politics, academia, the media, and the entertainment industry, has been hacking and slashing his way through other people’s underwear for the last 40 years?  How did we not know about this?  There may well be merit in each individual allegation, but the weight of the tide seems to overwhelm our faculties, and our capacity for reflection and discernment.  The sense is strong that we are being railroaded in some way to react with drastic measures: to forgo our prudence, perspective, and basic common sense.

Where does it go next, if we buy into the rush to judgment?  What will we be asked to give up, or do to someone, based on unsubstantiated evidence, and the fear that not making the right virtue-signal about it somehow compromises us?

What could be done to each of us, on that basis?

For my money, those are the real questions that face us now.

It may be tempting to blame the Russians for inciting the rush to judgment.  George Takei already has.  (As regards allegations of sexual misconduct, note that Takei and Moore are both due the same benefit of the doubt.)

And we know, with reasonable certainty, that the Russians do put out deceptive “evidence.”

But that’s kind of the point.  It’s why the whole “it was Russia” theme has the suspicious feel about it of an attempt to railroad our cognitive processes.  The Russians can’t be simultaneously obvious, and diabolically effective at deception.  It doesn’t work that way.

Meanwhile, trying to figure out all the smoke-and-mirrors evidence trails is not going to be a guide to wise behavior.

No, the better idea to focus on is that we need to stop the rush to judgment in our own minds.  That, we can control.  It’s not what erupts around us that determines whether we are susceptible to being railroaded.  It’s what’s going on inside of us.