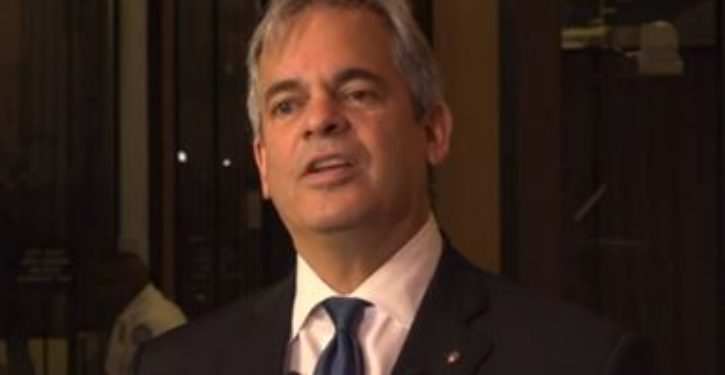 This past Monday, Democratic Rep. Ted Lieu walked out of a moment of silence on the House floor for victims of Sunday’s mass shooting at a Baptist church in Sutherland Springs, Texas. His reason for showing such galling disrespect for the dead? Here it is:

My colleagues right now are doing a moment of silence in the House of Representatives’ chambers. I respect their right to do that and I myself have participated in many of them.”

But I can’t do this again, I’ve been to too many moments of silences. In just my short period in Congress three of the worst mass shootings in us history have occurred. I will not be silent.

Showing disrespect as a form of protest has become a cottage industry for Democrats and liberals. We have seen it every week during the current NFL season as mindless, overpaid adolescents take a knee over perceived injustices.

The latest Democrat to resort to similar shenanigans is Austin Mayor Steve Adler, who has refused to march in is city’s Veterans Day parade, reports station KHOU, “because that parade will include groups carrying the Confederate flag.”

Adler said in a statement that Veterans Day should only be about honoring United States Miliary [sic] Veterans.

Apparently, U.S. military veterans who fought and died in the Civil War do no deserved to be honored, in the mayor’s view.

In an interview, Adler attempted to justify his position further by emphasizing that “there are people in our community that feel great pain associated with having the confederate flag in the parade.”

But the mayor had no such sympathy for the people in his community who felt “great pain” when four statues honoring Confederate figures were removed from the University of Texas at Austin campus in the middle of the night back in August. Isn’t he the mayor of all residents of Austin?