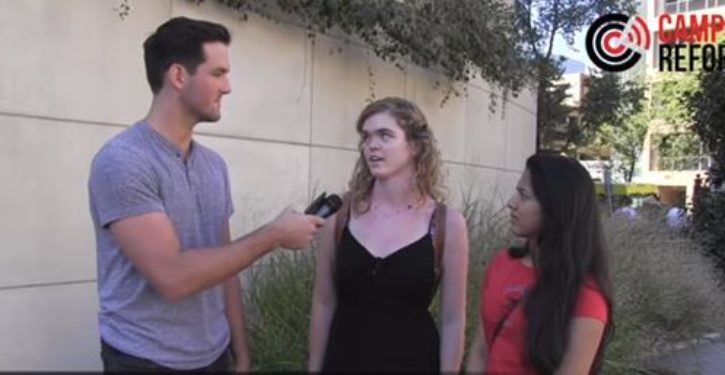 Americans can be such sheep, following the leader, with little or no ability to think on their own. Nowhere is this phenomenon more evident than on America’s college campuses, where socialism is all the rage.

Watch this Campus Reform video of students at George Washington University praising a tax plan that is presented to them as the work of socialist Senator Bernie Sanders.

First, the respondents are asked to evaluate the tax plan President Trump came out with this past week. Among the predictable overall reactions to the plan are “horrible for the middle class” and “not ideal.”

Then the interviewer asks about the various features of the Trump plan one by one, beginning with increasing the child tax credit. Except he first tells the students that these are elements of an alternative tax plan advanced by Sanders.

When they learn that they have just praised the tax plan they thought they hated, their reactions are priceless.

Here’s a thought about how the president might proceed going forward in selling his proposals to Democrats. Just tell them that these ideas originated with the socialist senator from Vermont. Sanders is probably too addled at this point to know the difference, and the opposition party will be pleased as punch that the president has finally agreed to do things their way.