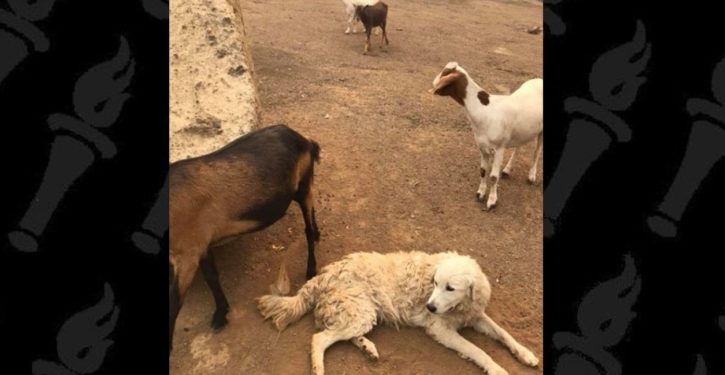 Ben Franklin is supposed to have said that “beer is proof God loves us, and wants us to be happy.”

I would have substituted “chocolate” there, but moving on.  In a similar spirit, we might say that “dogs are proof God loves us, and wants us to have a nobility to aspire to that we can hardly put into words.”

Out of the ashes of the dreadful wildfires in California comes a tale of such nobility.  The fires have claimed the lives of at least 41 people, and hundreds are still missing as firefighters struggle to maintain what hard-won control they have.  The stories of people fleeing from the fast-moving fires are heartbreaking.  Many have had only moments to rush out their doors, leaving everything behind to be burned to cinders.

Roland Tembo Hendel and his family, fleeing the Tubbs Fire near Santa Rosa, had a little more time than that.  They have land in Sonoma County, on which they keep a flock of rescue goats, and, along with their children and other pets, two Great Pyrenees dogs who herd and guard the goats.

When Hendel and his family were loading up, they realized they would have no way to bring the goats with them out of the path of the fire.

There simply was no room for the family’s flock of goats.

“By 11:10 we could see the first of the flames across the valley,” he wrote on his Facebook page. “By 11:15 they were growing larger and the winds went mad. We had loaded up the dogs and cats, but Odin, our stubborn and fearless Great Pyrenees would not leave the goats.”

Odin — living up to the Norse god he is named after — would not abandon the flock.

So the family reluctantly and with heavy hearts, watched Odin as they were departing, hoping they would see him again but knowing it was likely he would not survive.

Odin’s sister Tessa did go with the family.  But Odin was standing his regular “watch” of the day, on which he rotated with Tessa.  He was guarding his flock, and simply would not come.

The family’s harrowing exit held off the worst of the grief until later:

“Cars behind us on Mark West Springs Road were pouring flames out of the windows as they roared down the road,” he wrote on Facebook. “Later that morning when we had outrun the fires I cried, sure that I had sentenced Odie to death, along with our precious family of bottle-raised goats.”

When the fire had burned its way through, the family returned home, braced for the worst.

“We were able to make it back to the smoldering wasteland of our forest,” Hendel wrote on Facebook. “Every structure is in ruins. Trees are still burning.”

But suddenly, the goats appeared and raced toward the family. And there was Odin — fur burned, whiskers melted, limping on his right leg. The battle injuries suffered in his desperate fight with the flames.

During the firestorm Odin not only protected his flock, he also seems to have adopted several baby deer who were huddled around him for safety.

The Hendel family’s first need now is to rebuild the barn for the goats before winter weather sets in.  You can contribute to that effort, and help pay Odin’s vet bills, here.

I suspect most of us understand the unspoken reason why leaving Odin affected Hendel so deeply: because he knew Odin wouldn’t have left him.

Humans sometimes have to make the decision Hendel had to make, for his family’s sake.  Dogs never do.

Maybe it’s not the spirit of the (apocryphal) Ben Franklin quote we’re really after.  Maybe dogs are proof that God never intended us to do it all by ourselves.  He gave us dogs to remind us that the provision of unbreachable loyalty – of promises kept when we’re up against the wall – comes from Him, in a four-footed package whose nobility we are not even appointed to emulate.  One thing is for sure: dogs teach us the important things by breaking our hearts wide open. 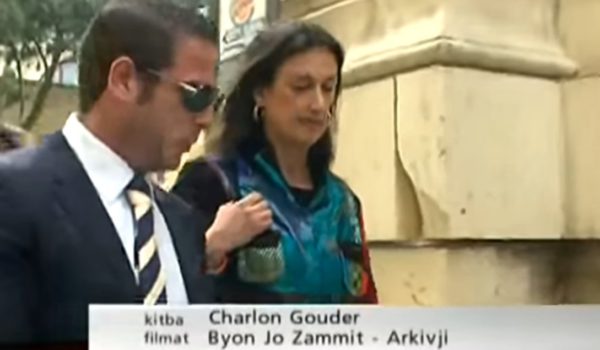