Lawyers for Imran Awan, an ex-aide who ran information technology (IT) for Democratic Rep. Debbie Wasserman Schultz, “feel very strongly” that data recovered from a hard drive on Capitol Hill should not be valid as evidence because he put a note that said “attorney client privilege” near it before leaving it in a phone booth, they said in federal court Friday. A police report shows that the backpack contained a laptop with the username “RepDWS,” copy of Imran Awan’s ID, and the notebook.

Prosecutors revealed that when they arrested Imran at the airport in July as he tried to board a flight to Pakistan, he was carrying a resume with an alias in the Jackson Heights, Queens neighborhood of New York City. Imran may have planned to “relocate” there, seemingly under a different identity, Prosecutors suggested. They said he had wiped his cell phone hours before the arrest, suggesting that he was taking “active measures” to hide evidence.

Hina Alvi, Imran’s wife, was arraigned on four felony counts of bank fraud. Wasserman Schultz of Florida added Alvi to her payroll after the couple was already the focus of a criminal investigation into misconduct on Capitol Hill.

Hina handed a U.S. passport to prosecutors, and prosecutor Michael Marando asked if she had a Pakistani passport too. Hina shook her head “no” before her lawyer, Nikki Lotze, acknowledged that Hina did have one, but that it was in Pakistan. Lotze later said the passport was expired, and the judge requested that she try to have it mailed to U.S. authorities.

The investigation into Imran and his family began when House authorities noticed they were billing expensive equipment to congressional offices and falsely listing the price as exactly $499.99, one penny under the threshold at which equipment is automatically tracked by House administrators. The Awans’ relatives told The Daily Caller News Foundation that similar equipment was being sent to Pakistan. The investigation soon broadened into cybersecurity issues, when authorities found the Awans had accessed a congressional server 5,400 times without authorization and moved “massive” data off the House network, The Washington Post reported in September.

After they learned of the investigation, prosecutors say the husband and wife tried to go to Pakistan, first wiring hundreds of thousands of dollars there that prosecutors allege was obtained through bank fraud. Authorities have not charged the Awans, as of yet, with crimes related to the original investigation in the House.

Chris Gowen, Imran’s attorney, sought on Friday to preemptively stop prosecutors from using the laptop as evidence as it relates to potential additional charges, saying: “We do expect there being an attorney-client privilege issue in this case… What occurred is a backpack from my client was found, he was trying to get a better signal, there was a note that said attorney client privilege and a hard drive. We feel very strongly about this.”

A Capitol Police report shows that the laptop was found in a phone booth  in the Rayburn House Office Building after midnight, after Imran had already been banned from touching the House network, and that the laptop had the username RepDWS.

In an emotional exchange caught on video in May, Wasserman Schultz demanded that the Capitol Police chief return the laptop, saying there would be “consequences” if they did not. She said “if a member loses” equipment, police should not be able to look at it. She hired an outside lawyer to try to block prosecutors from looking at it, invoking the “speech and debate” clause, which covers members’ legislative activity. Two months later, she said it was actually Imran’s laptop and she had never seen it. She did not fire Imran for months after the laptop was found in his backpack, and continued to pay him until his arrest.

Prosecutors accidentally gave information about law enforcement activities to Imran’s attorneys and claim that they should not have. “Earlier this week, there was the inadvertant disclosure of law enforcement materials to defense counsel,” Marando said. “There may be a motion on that.”

Prosecutors did not request that Hina wear a GPS monitor, and Imran’s lawyers repeatedly asked for his to be removed. The judge denied a similar request last month.

The judge said she was open to removing the monitor, partly because of the disparity introduced by prosecutors not requesting one for Hina. “If he’s charged with the same thing, why should I keep him on the GPS monitor?” Judge Tanya S. Chutkan said.

Hina left the country in March, but Imran’s lawyers said, “Alvi has returned with the children, so the government’s flight risk argument is negated.”

The judge said, “I will consider reducing [conditions] further, his motivation to flee is lessened when his family is here.”

Gowen cited “tremendous financial hardship,” but Marando noted the family owned four properties in the U.S. that they sold, and that they were doing a major land deal in Pakistan. “There’s no reason for him to stay in the U.S. with property in Pakistan,” Marando said. “He was [already] going to be in Pakistan away from his wife and kids” for months with the flight arrangements they made before being charged.”

“I cannot say what goes on in the mind of an industrious person who wants to leave the country,” Marando said. “But he’s traveled to Pakistan numerous times and made numerous wires of significant amounts of money for the purchase of property, potentially to set up a life there. He had on him two cell phones [and a] laptop. One cell phone was wiped two hours before we arrested him. He was taking active measures to [evade] our investigation.”

“When we arrested him there was a Whatsapp message from his lawyer asking to speak with his client,” indicating he may have had reason to believe he was about to be arrested,” Marando continued. “There wasn’t much on the laptop, but there was a resume with an alias in Jackson Heights, Queens. So when we say intent to leave, it’s also intent to relocate.”

“Awan’s father was dying and he had a land deal they were trying to help him fix and there’s no allegation of anything wrong with that deal,” Gowen said. Gowen acknowledged to TheDCNF that Imran was sending money to Azhar Awan, who is a member of the Faisalabad police force, and said, “You need to understand how land purchases work in Pakistan and I don’t have time to explain it to you.” He added “there were attempts to steal the property from the father.”

“They found a file called ‘.obliterate’,” Marando said of the iPhone Imran was carrying when authorities arrested him at the airport. “It includes the time it was wiped, which was at 6 p.m.,” hours before he was arrested. Imran had just purchased the phone, Gowen said. 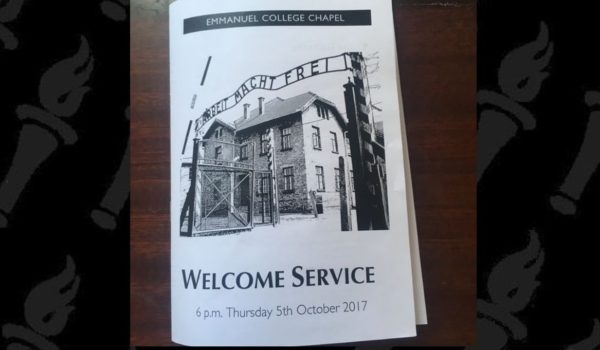 Unreal: Cambridge U. college uses image of Auschwitz death camp on welcome leaflet
Next Post
Irony: Will Google lose its own best ally?