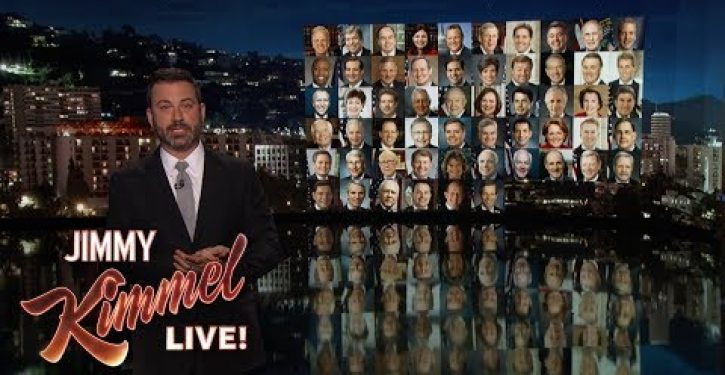 If there’s one thing that will get a diehard Democrat blubbering like a baby, it’s a mass shooting. Check that. It’s not the loss of life that excites donks’ lacrimal glands but the “fact” that the solution is so simple.

Speaking of simple, last night it was late-night TV host Jimmy Kimmel’s turn to deliver a quasi-passionate appeal for more stringent gun control laws, complete with crocodile tears. Below is a video clip of his Emmy-worthy (maybe that’s enema-worthy) performance. (A transcript of the relevant portion follows.}

This morning, we have children without parents and fathers without sons, mothers without daughters. We lost two police officers. We lost a nurse from Tennessee. A special-ed teacher from a local school here in Manhattan Beach. It’s the kind of thing that makes you want to throw up or give up. It’s too much to even process — all these devastated families who now have to live with this pain forever because one person with a violent and insane voice in his head managed to stockpile a collection of high-powered rifles and use them to shoot people. [Emphasis added]

I am not diminishing the tragedy or senselessness of the massacre Sunday night in Las Vegas, which as of this writing had claimed 59 lives. I am, however, responding to liberals’ knee-jerk (emphasis on jerk) reaction to every mass shooting.

It would be redundant to rehash the arguments that have been advanced on behalf of stricter gun control laws, which may be found here. Instead, I would like to focus on what it would cost to implement a nationwide effort to rein in illegal firearms. Clearly, that is a more modest goal than those proposed by Democrats, but it will suffice for the present purposes.

To appreciate the cost — not to mention effectiveness — of a “war on guns,” we need to look for analogs. One that immediately comes to mind (and which ironically Democrats have long opposed) is the war on drugs, begun during the Nixon administration.

As the Associated Press noted in 2010:

After 40 years, the United States‘ war on drugs has cost $1 trillion and hundreds of thousands of lives, and for what? Drug use is rampant and violence even more brutal and widespread.

“In the grand scheme, it has not been successful,” Kerlikowske told The Associated Press. “Forty years later, the concern about drugs and drug problems is, if anything, magnified, intensified.”

From there, the article went on to note that then-President Barack Obama had resolved to “reduce drug use and the great damage it causes” with a sweeping national policy that would treat drugs first and foremost as a public health issue. Instead of imprisoning drug offenders, including some of those involved in the sale and distribution of illegal substances, the new plan would focus on prevention and treatment.

The problem with guns is at least as daunting as the drug problem. According to the Bureau of Justice Statistics, 26.4 million drivers aged 16 or older were stopped by police in 2011. Three percent of stopped vehicles, or 792,000, were searched by police who had cause. There is no reason to believe that statistic will change significantly even if police restrict their searches to illicit firearms.

Then there’s the issue of accessibility. A 2012 article at Gizmodo examines the ease with which guns may be purchased — cheaply and legally — on the internet.

One fix for that problem offered by many liberals is to ban all firearms, even those used by police to the extent that that is feasible. These are often the same people who emphasize the financial gain to the nation that would come with decriminalizing drugs.

In a white paper for the Cato Institute, Harvard economist Jeffrey Miron estimated that ending the war on drugs would inject $76.8 billion back into the U.S. economy in 2010 alone. He further projected that the government would save $41.3 billion spent on law enforcement.

Are Democrats now proposing that those same billions continue to be spent, this time on the criminalization of all guns?