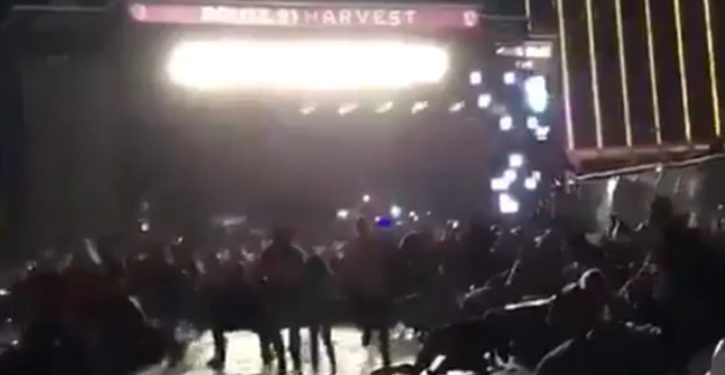 Chaos breaks out as gunman mows down concert-goers on the Las Vegas Strip. (Image: Screen grab of amateur video, Twitter)

FINAL UPDATE to this post: The death toll was 58 as of noon on Monday, 2 October, and the injury count at 515, making this the deadliest mass shooting in U.S. history.  This will be the final update of casualty figures for this original post.

UPDATED figures at 3:35 AM (6:35 AM Eastern): a horrific 50 dead (probably more, final count still pending) and 200+ injured.  At least 2 police officers are included in the fatalities, but there are believed to be more.

UPDATE at 1:30 AM: **SHOOTER DEAD** — The shooter was on the 32nd floor of the Mandalay Bay, and the local  sheriff (Joseph Lombardo) just briefed the media on-air that he had been killed by police, apparently in a shootout with them, when they found him.  The shooter is identified and is a local resident, but the sheriff didn’t give his name.  He did give the name of a person of interest associated with the shooter, a Ms. MariLou Danley, Asian female, also a local resident.  Authorities are searching for her.

ID OF SHOOTER: Sheriff Lombardo has just confirmed the identity of the suspect (3:35 AM Vegas time): Stephen Craig Paddock, age 64, of Mesquite, Nevada.  His is one the names rocketing around social media, and Heavy has some info on him assembled here.  He shares an address with Marilou Danley.

UPDATE as this goes to post: just after midnight local time (Las Vegas), the report came out that one suspect “is down.”  No word on the number of known shooters.

UPDATE 2: Very latest — police think there was only one gunman.  As of 12:30 AM they are reportedly no longer searching for additional gunmen.

UPDATE 3: In May 2017, ISIS published a propaganda video issuing threats against U.S. cities including Las Vegas.

UPDATE 5: See end of text; quotation from young woman on scene at the concert who said they received a bizarre warning that “you’re all going to die” about 45 minutes before the shooting started.  Not known if this was related.

#breaking A police source just confirmed to me that more than 20 people are dead. #MandalayBay

We won’t know before morning the full extent of what is going on with this situation, but so far Fox and ABC reporters have both said they’re hearing of multiple injuries being admitted to local hospitals, a number of them involving gunshot wounds.

The shooting apparently started about 10:30 PM (very roughly) Las Vegas time (same as Pacific time) at a country music concert (the Route 91 Harvest festival) near the Mandalay Bay resort and casino on the Las Vegas Strip.  No confirmation yet on the number of shooters, but it’s been estimated as one to three.  Some eyewitnesses have said the shooting seemed to be coming from the upper stories of nearby buildings.

Around 11:15 PM (again, Vegas/Pacific) I heard a report from ABC that hundreds of gunshots had been heard.  The sheer size and scope of the chaos would comport with that, although civilian witness reports on that are not always reliable.

Confirming that one suspect is down. This is an active investigation. Again, please do not head down to the Strip at this time.

Stories differ as to whether any shooter has been caught or neutralized yet.  (See update at top.)  As I type, this is an ongoing tactical situation, and massive numbers of people are being moved around by police order on the Strip.  Dozens of police vehicles are arrayed to close down what is reportedly at least a four-block stretch of the Strip.

Reporters just outside the cordoned-off area are able to interview witnesses who have been evacuated, some from the concert and some from surrounding venues.  There are reports that the hotels immediately adjacent to the concert location are being evacuated.  (The police may be searching them systematically for the shooter(s).  One woman interviewed about half an hour ago said that she had been at an outdoor cafe seating area, and was required by police to move with other people into a bar, where the police then eyeballed each individual and let them go one by one.  The witness said that when she left, there were 15 or 20 men who had been put prone on the floor and were being patted down and questioned.)

I’ve seen two witness interviews in which the eyewitnesses said they were certain that multiple people had been hit with gunfire.  Quite a few people were reportedly injured in the chaos when concert-goers began stampeding away from the gunfire outside Mandalay Bay.  So there are probably more injuries from that than from gunshot wounds.

Adam Housley on Fox just said (11:50 PM) that there were two people confirmed dead and 24 injured, and that the numbers were expected to rise significantly.  There has been no follow-up on this report, but earlier, an ABC reporter indicated that one police officer had been hit with gunfire.

There are multiple images being posted to Twitter by foreign news sources of bodies lying immobile in the area where the concert audience was initially.  I’m not going to show those here.  But it does appear likely that the death toll is going to rise significantly.  Adam Housley says that he can see a lot of those bodies from where he is standing.

Obviously, thoughts are going to the ISIS calls in recent months for lone-wolf attacks.  Beyond that, there is no point in speculating — or passing on some of the completely unsubstantiated rumors I’m seeing on Twitter — until we have more information.

Quotation from Daily Mail on UPDATE 5:

One witness at the concert told DailyMail.com that a woman had entered the crowd with a male companion and screamed ‘They’re all around… You’re all going to f***ing die today’ just 45 minutes before the gunfire broke out.

The woman was described as being Hispanic and in her 50s; she and the man were escorted out of the venue by security.

Witness Breanna Hendricks, who is in Vegas celebrating her 21st birthday, said: ‘There was a lady who came running up behind us in the concert and she started to play with people’s hair acting crazy and she told us that we’re all going to f***ing die.

‘She said they’re all around us and we were going to die,’ continued Hendricks, whose mom Shawn Hendricks also witnessed the startling altercation.

‘She was Hispanic, probably about 5ft 5, brown hair. It felt like she had knowledge of what was about to happen, her and her boyfriend who was also Hispanic.

‘The woman was saying her boyfriend couldn’t breathe so they could get through the crowd.

It’s not clear whether what she witnessed is related to the shooting or not.

Woman celebrating 21st birthday was in front row. Says another woman came during show & told everyone they were going to die. pic.twitter.com/kwe00GMmqR

Note: the woman described here does not fit the description of Marilou Danley, who is 4’11” and “Asian.”  There are three different men being rumored all over social media to be the shooter.  There is no point in mentioning them; we’ll know when the authorities announce who it was. 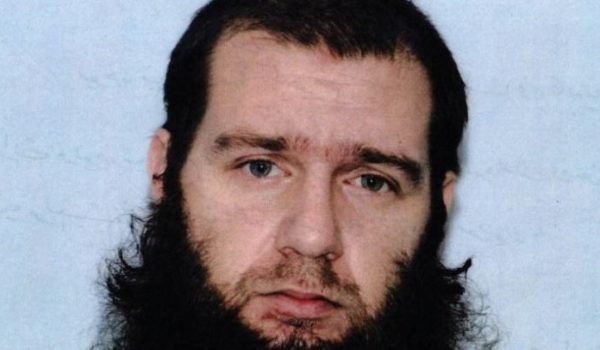