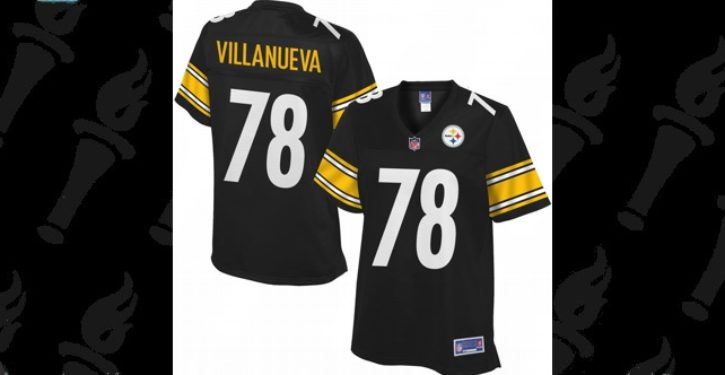 Sales of his jersey have gone through the roof overnight. He is Pittsburgh Steelers offensive tackle Alejandro Villanueva, and the reason for the sudden spike in sales is not related to his performance on the field of play. It is related, rather, to two facts. One is that Villanueva was hero before joining the Steelers, having earned a Bronze Star with valor during one of his combat deployments to Afghanistan as an Army Ranger.

The more immediate reason is that he was the only player to exit the locker room and stand for the national anthem Sunday.

Villanueva recounted the Aug. 25, 2011 story of his valor in a 2014 interview with ESPN. The former Army Ranger’s unit described being tipped off at night to the presence of multiple Taliban in a nearby Kandahar village. When his unit arrived he found no Taliban and began questioning an Afghan elder.

From that point ESPN described the night:

“As the elder began to explain, Villanueva and his troops were ambushed by as many as eight Taliban militants in a spray of bullets.”

Spc. Martin Piggott was shot in the kneecap. Sgt. Roy Dutton was shot in the back of the leg. Army Pvt. 1st Class Jesse Dietrich was shot near the armpit. Under heavy fire, Villanueva pulled the wounded Dietrich down an alley and into a second mosque, where a medic took over. Villanueva returned to fight, but when he came back to check on the injured soldiers, the medic told him they needed to move the wounded to a safer location. Carrying Piggott on his shoulders, Villanueva took the three to a nearby school, where they waited for a helicopter that would transport the wounded to the city of Kandahar.

“He was pretty scared,” Villanueva said. “He kept asking for help.”

By the time Villanueva lifted Dietrich onto the helicopter, his eyes were purple. He died a short time later.

“As the platoon leader, I feel responsible for everything my platoon does or fails to do,” Villanueva said. “I failed to keep Jesse Dietrich safe, and you know, it was just tough. … I keep thinking of other ways I would have done it, but it was a very tough mission and the enemy beat us that day. It was just a really bad night.”

Villanueva went on to serve two additional tours in Afghanistan before starting his NFL career by signing a contract with the Philadelphia Eagles in 2014.

This report, by Saagar Enjeti, was cross posted by arrangement with the Daily Caller News Foundation.

NFL in London: Ravens, Jaguars stand for ‘God Save the Queen’, kneel for ‘Star-Spangled Banner’
Next Post
Looming Obamagate will make Watergate look like a misdemeanor