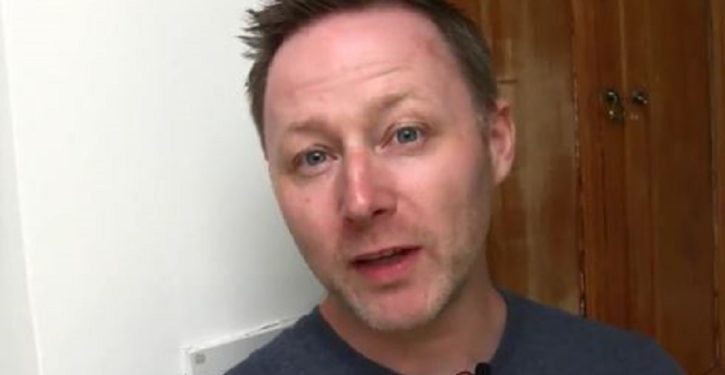 Limmy entertain you? Not by a longshot. (Image: Twitter video screen grab)

Mel Brooks is right: Political correctness will be the death of comedy. But it’s not the only thing that is lethal to the human need for laughter. Liberalism also poses a grave risk to the future of humor.

When liberals try to be funny, they end up sounding bitter and oftentimes obscene, which other libs go ape for. An example was Stephen Colbert’s observation that “the only thing” the president’s “mouth is good for is being Vladimir Putin’s c*ck holster.” The live audience at the Ed Sullivan Theater went wild.

Now another wit has sounded off. He is Limmy, whose actual name is Brian Limond, and he tweeted this howler earlier today to his 329,000 followers on Twitter:

I am a proud American, but I would gladly lose a war against North Korea if it got our President #Dotard locked in a POW camp. #VoteHilary

Brilliant, no? Limond is described as Scottish according to Wikipedia, and I can find no confirmation that he has expatriated to the U.S., but that’s the least of our problems. In January, the would-be funnyman tweeted this:

But this time no one was laughing. One Twitter user scolded:

. Dude. You even look INSANE. You are so done. Threats to a POTUS are a felony. #Reported @FBI @SecretService

But he wasn’t done, as today’s tweet attests. At least this time, the thumbs downs were more prevalent than the likes. Here are several reactions:

Is this guy a comedian, or a political commentator? Is there a difference anymore? It’s so hard to tell. In any case this is dumb https://t.co/RaVLC68zuX

Imagine being this insane. https://t.co/SqbubXyBUz

As much as I disliked Obama, I would have never gleefully used a North Korean insult against him

Leftists continue to side against America https://t.co/JToeimEXMn

What makes this all so much more galling is the kid glove treatment the Left accorded Barack Obama when he was president. Even the slightest suggestion that the man was anything less than a god was met with accusations of racism or worse.

Leonardo DiCaprio: People who don’t believe in science should not be allowed to hold public office
Next Post
‘I cried when they passed Obamacare’