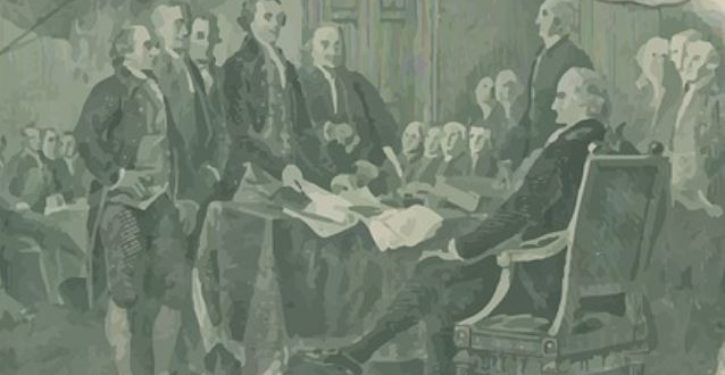 There are many things that can be said about the American electoral college system, but calling it a threat to national security? That’s what Politico Magazine is now arguing.

In a lengthy and emotionally charged diatribe co-authored by a counter-terrorism expert and a former Army intelligence officer, the left-leaning magazine insists that the Electoral College should be abolished because it provides foreign nations with the opportunity to influence the outcomes of U.S. presidential elections. (Hmm, which election could they possibly have in mind?)

The authors uses Alexander Hamilton’s Federalist No. 68 to explain the Founding Fathers’s theory that the U.S. electoral college would protect the nation from “the desire in foreign powers to gain an improper ascendant in our councils.”

The essay further argues that Hamilton and the other forefathers could not have imagined, or prepared for, an election like 2016, thereby bolstering the claim that Russia “was able to manipulate America’s election process with stunning effectiveness.”

“But it’s clear the national security rationale for the Electoral College is outdated and therefore it should be retired,” opine authors Matthew Olsen and Benjamin Haas. ” Simply put, it enables foreign powers to more easily pierce the very shield Hamilton imagined it would be.”

After doing away with the electoral college, the pair continues, the nation would be better off moving toward a system where the U.S. elects presidents based on the national popular vote:

The authors throw out the possibility of creating some sort of task force or media platform to publicly call out and identify “the false narratives that adversaries push through fake news stories.” Once again, this critique seems squarely aimed at conservative media.

They also suggest that the U.S. put more pressure on social media websites, like Facebook, to ensure they “identify and block fake accounts and bogus ad campaigns designed to tilt our elections.”

Whether or not these other measures are enacted, “ending the Electoral College should be central to the discussion.”

The piece never addresses the problem of representation in a national election in the event the Electoral College were to be scrapped. States with small populations, like Wyoming and Montana, would be off the radar of any candidate since they offer few votes. There would be no impetus for citizens of those states to cast their ballots because their will would be drowned out by larger states such as California, Illinois, and New York.

Perhaps it is only a coincidence, but such an arrangement would favor the Democrats, who maintain strongholds in those states.

Pelosi: DREAMers’ families did a ‘great thing’ by illegally bringing children to America
Next Post
Apple CEO says he wants more illegal immigrants to come to the U.S.