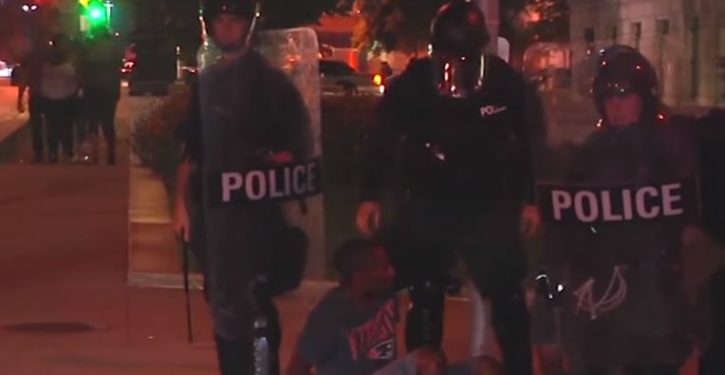 St. Louis police arrested more than 80 demonstrators that vandalized city businesses and assaulted police officers in a series of protests against a not-guilty verdict in a fatal police shooting.

“Some criminals assaulted law enforcement officers and threw chemicals and rocks at them. All of the officers’ injuries were minor or moderate. All will be returned to duty soon,” Police Commissioner Larry O’Toole said late Sunday night.

Riot police eventually showed up to arrest the demonstrators, taking them into custody and confiscating a total of five weapons from people.

“We have work to do here in the city. We need more and better opportunities for all our citizens but destruction cannot be tolerated,” St. Louis Mayor Lyda Krewson said. “Law enforcement has my full support.”

St. Louis people have been marching in the streets since Friday when a judge ruled “not guilty” in former police officer Jason Stockley’s 2011 shooting of Anthony Lamar Smith. A total of 11 officers were injured while guarding the protests Friday night, and some of the protesters threw rocks at the windows of the mayor’s house.

More protests are planned for Monday, one organizer said. They plan to disrupt people’s routines in order to get their message of injustice across to the local community.

“There will be a lot of things that will be planned that we won’t talk about that will disrupt and make people uncomfortable,” Reverend Darryl Gray, an activist, told KMOV.

Prof who was driven off campus for opposing ‘no whites’ day has his day in court
Next Post
Donald Trump again eschews Barack Obama’s example in his inaugural address at the U.N.