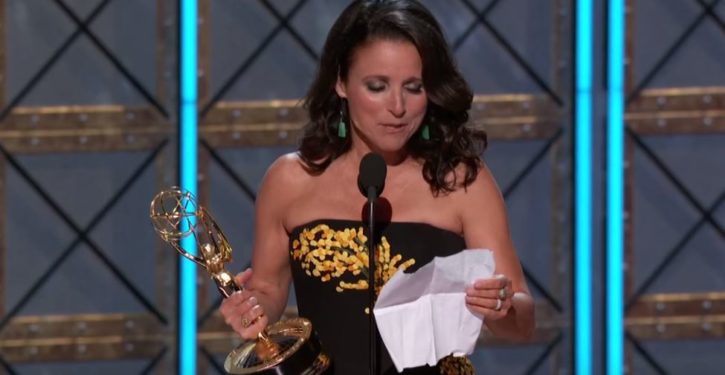 On Sunday, Hollywood liberals gathered for their annual televised burning of black candles for conservatives and conservatism (aka, the Emmy Awards, which, according to The Daily Caller, “got political” right from the beginning, “with mentions of President Donald Trump, the Russia investigation and global warming, just to name a few.”

Julia Louis-Dreyfus, for example, sang about how nice it would be to have a president who “was not beloved by Nazis,” the Daily Mail said.

Keep in mind that according to liberals, pretty much anyone who supports the president is a white supremacist and a Nazi.

The 56-year-old actress won Outstanding Actress in a Comedy Series for the the sixth consecutive year en route to tying a record for most acting awards ever.

The big win for HBO comedy series Veep ties her with acting legend Cloris Leachman for most ever by a performer as they both have eight gongs total.

But during her speech, she managed to get another jab at the 45th President.

“We did have a whole storyline about impeachment but we abandoned that because we were worried that someone else might get to it first,” she said while accepting her trophy.

A post at Vulture called her smear one of the “best” Trump “jokes” at the Emmys.

— “And we all know the Emmys mean a lot to Donald Trump. Because he was nominated multiple times for Celebrity Apprentice but he never won. Why didn’t you give him an Emmy? I tell you this. If he had won an Emmy, I bet he wouldn’t have run for president. So in a way this is all your fault.”

— “But he didn’t. Because unlike the presidency, Emmys go to the winner of the popular vote.”

Unemployed man Sean Spicer assured Stephen Colbert that the crowds were huge — yuge! — telling him, “This will be the largest audience to witness an Emmys, period, both in person and around the world.”

“Imagine if your president was not beloved by Nazis.” — Julia Louis-Dreyfus as her Veep character Selina Meyer from the cold open

“[Winston Churchill’s] life reminds us what courage & leadership in government really looks like.” — John Lithgow during his acceptance speech

Got that? Calling 60 million-plus people “Nazis” is a joke, according to the Hollywood Left.

The event was hosted by Stephen Colbert, who in May wowed his late-night audience by declaring on live TV that the only thing the “president’s mouth is good for is being Vladimir Putin’s c*ck holster.” Somehow CBS censors overlooked that profanity and allowed the distinctly unfunny and puerile Colbert to keep his job, thereby enabling his insinuation last night that Trump is a traitor:

“‘The Americans’ has hotter spies, than the Russia inquiry,” Colbert added, as a shot of Vladimir Putin and Donald Trump shaking hands flashing across the screen. “Even treason’s better on TV.”

“Look on the bright side handmaids [‘The Handmaid’s Tale’] at least your healthcare is free,” he continued. “The dark futures always brighter on TV.”

“So, friends I know that the world may be the worst we’ve ever seen, but it’s never been better on your TV screen.”

Let’s face it — if you support the president, Hollywood leftists hate your guts. Even if you’re on-the-fence, they’ll loathe you. The only way to gain approval by the Tinseltown elites is to froth at the mouth and bellow obscenities. Checking your brain at the door is another prerequisite.

Dallas considers renaming schools named after Franklin, Jefferson, Madison
Next Post
Your money and your life 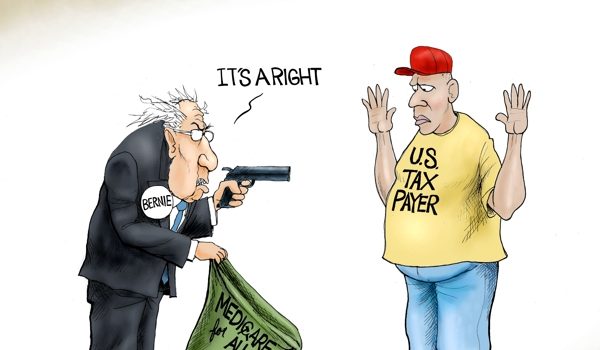