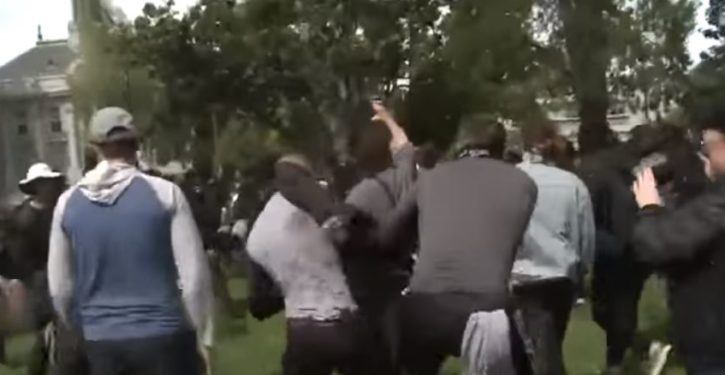 Despite the teeth-gnashing and nail biting, not to mention the threats of extreme violence, the liberal Left survived the speech given last night by conservative commentator Ben Shapiro without a single emotional scar to show for it.

There were nine arrests made, three of them on weapons charges. But the demonstrators were by and large peaceful, according to Fox News:

Some chanted against fascism, white supremacists and President Donald Trump. Others were holed up inside a student building, waving signs protesting the university’s decision to allow Shapiro on campus.

Dan Mogulof, a spokesman for the university described the event as “successful” and added that Berkeley is “committed to hosting speakers like Shapiro in the future.” Mogulof didn’t clarify what he meant by “like Shapiro.” He could have meant “Jewish,” even though the writer’s religion was called into question by media personality Tariq Nasheed, who attempted to whip his 199,000 Twitter followers into a frenzy over the planned speech:

Suspected white supremacist Ben Shapiro, who tries to mask his racist rhetoric by claiming to be jewish, is in Berkeley now #BenAtBerkeley

Despite the optimistic spin the Berkeley spokesman put on last night’s event, it came with its costs. As Shapiro tweeted:

Perhaps the most sobering part of the entire affair is the fact that it took place on the grounds of an institution of higher learning. When people behave the way liberals did in anticipation of this speech, you have to wonder what in the world Berkeley is teaching them.