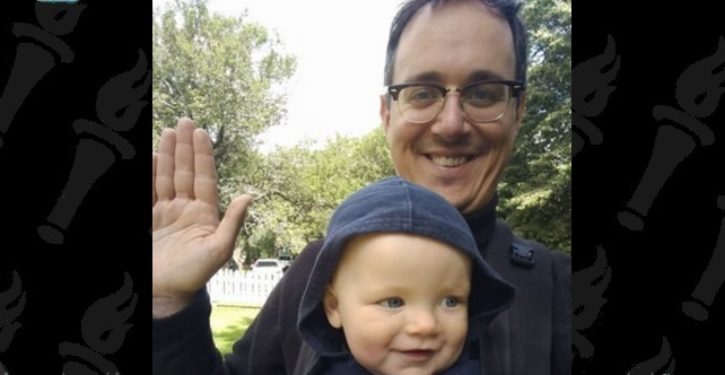 According to an article at A plus, this story is “another win for all parents.” I’m not sure what the author considers previous wins, but nothing that has emerged so far from the annals of social justice warfare has seemed like much of a victory for parenthood.

In this case, the crusader for is an unlikely choice. He is a white male, which by all indicators places him squarely in the “two strike” category. Maybe the fact he is willing to use words like inclusive and speak positively of same-sex couples is enough to redeem him in the eyes of the Left.

The hero of this morality tale is Canadian dad Justin Simard. Recently Simard went grocery shopping with his 9-month-old son in tow. When he pulled his car into the parking lot of a supermarket, he encountered the sign shown in this tweet:

Oh, the humanity! The sheer injustice of it all was enough to win him a coveted feature story in the Huffington Post, in which he makes his case for equality:

When I went to get out of my car, the person in the spot next to me gave me a dirty look, which quickly vanished when I took my son out of his car seat. Then the wording of the sign bothered me. What about single fathers? What about same-sex couples? It occurred to me that the sign could be more inclusive.

So he took the selfie and published it in his tweet, which “has since been favorited over 400 times and has more than 100 retweets,” according to A plus’s Ariana Marini. But if you go directly to the post on Twitter (which now has been liked 841 times) not all the responses are supportive:

NO…when you’re able to get pregnant we can talk. Until then stay out of these parking spaces.

so lets say you take the spot. and then pulls up a 9-month pregnant woman with 2 kids. how you like your spot then?

Then again, maybe Camien and Zapella simply aren’t current on breakthroughs in the field of genetics. Mere days before Justin Simard published his angry tweet, CNN reported that a transgender man had given birth.