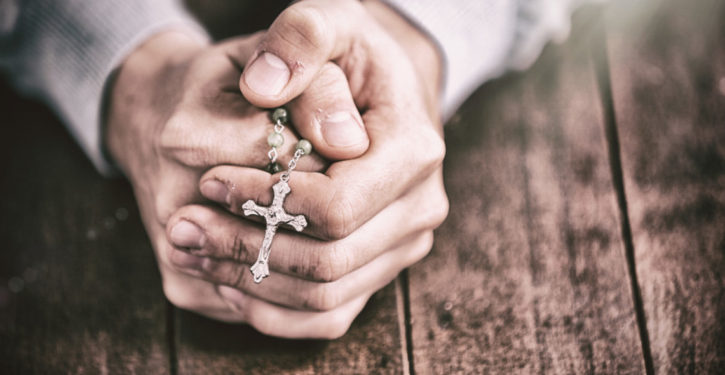 A Catholic priest shared his story of conversion from life in the Ku Klux Klan when he announced his leave of absence from church leadership. But the Washington Post left out key information in its retelling of the story.

Fr. William Aitcheson shared the story of his conversion to faith and his repentance from a life of hate and violence with the Ku Klux Klan in an editorial published Monday in the “Arlington Catholic Herald.” The Washington Post, however, ran a much different narrative focused on the priest’s shame that conveniently omitted the fact that he was not a practicing Catholic during his time in the KKK. Participation in the KKK as a Catholic would have been impossible, as the KKK is an explicitly anti-Catholic group.

Aitcheson shared his past in an effort to inspire current white supremacists to repent from their ways, as he once did:

As a young adult I was Catholic, but in no way practicing my faith. The irony that I left an anti-Catholic hate group to rejoin the Catholic Church is not lost on me. It is a reminder of the radical transformation possible through Jesus Christ in his mercy.

If there are any white supremacists reading this, I have a message for you: you will find no fulfillment in this ideology. Your hate will never be satisfied and your anger will never subside. I encourage you to find peace and mercy in the only place where it is authentic and unending: Jesus Christ.

Aitcheson’s story of transformation is one of stark contrasts. Raised Catholic but non-practicing as a young man, police arrested 23-year-old Aitcheson in 1977. Police identified him as the “exalted cyclops” of a KKK lodge in Maryland. In that role, he participated in six cross burnings, the writing of threatening letters, and a bomb-making plot that police ultimately thwarted. Aitcheson said that when he looks back at his younger self, he hardly recognizes the man.

“My actions were despicable,” he wrote. “When I think back on burning crosses, a threatening letter, and so on, I feel as though I am speaking of somebody else. It’s hard to believe that was me.”

Aitcheson says he felt that God guided him through his ordeal with the law and his subsequent soul-searching. Ultimately, he felt led to adopt an entirely new lifestyle and outlook on his fellow man, and to rejoin the Church:

Christ teaches something different. He teaches us that we are all his creations and wonderfully made — no matter our skin color or ethnicity. Realizing this truth is incredibly liberating. When I left my former life, I did a lot of soul-searching. God humbled me, because I needed to be humbled. But abandoning thoughts of racism and superiority gave me the liberation I needed.

Images of the riots at Charlottesville prompted him to share his story openly, not as a story of shame, but as an example of the hope of redemption for those who he says are enthralled to a distorted ideology of hate toward other people groups.

The Catholic Diocese of Arlington corroborated Aitcheson’s intent in sharing his story, and said that he chose to take a temporary leave of absence to spare the church any unwanted attention. They released a statement that read:

Fr. William Aitcheson’s article was written with the intention of telling his story of transformation. He voluntarily asked to temporarily step away from public ministry, for the well-being of the Church and parish community, and the request was approved. He will not be available for interviews.

Aitcheson served the Arlington diocese faithfully since Oct. 18 1993, and has been a Catholic priest since his ordination on Dec. 10, 1988. He left the KKK after his 1977 arrest, and in the years since has ministered to all members of his congregation, no matter their ethnicity or background, with “no accusations of racism or bigotry against [him].”

Bishop Michael Burbidge said the Arlington diocese is ready to further the legacy of mercy and transformation exemplified in Aitcheson’s life:

While Fr. Aitcheson’s past with the Ku Klux Klan is sad and deeply troubling, I pray that in our current political and social climate his message will reach those who support hate and division, and inspire them to a conversion of hear. Our Lord is ready to help them begin a new journey, one where they will find peace, love, and mercy. The Catholic Church will walk with anyone to help bring them closer to God.

It is sad that The Washington Post saw a need to omit a vital fact of the story. One would like to hope it was an unintended error and not a further attempt to smear Catholicism, something the paper has done far too often.