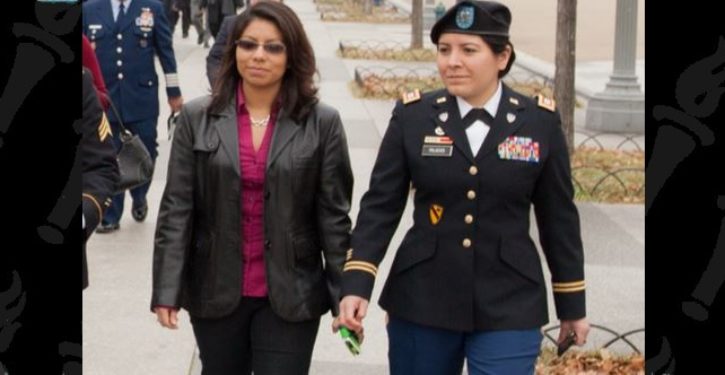 If you like meritless, unripe lawsuits, the National Center for Lesbian Rights has a case for you. It is representing transgender plaintiffs suing President Trump and Pentagon officials over Trump’s comments that transgender people shouldn’t be in the military because of the medical costs associated with their condition.

The courts should dismiss the challenge in Doe v. Trump. The Pentagon has not even carried out Trump’s suggestion, so the challenge is not even ripe. And even if it were, it is perfectly sensible not to recruit transgender people for military service.

The progressive web site Slate published an article titled “Transgender Service Members’ Medical Costs Are Not a ‘Burden,'” but even Slate‘s own figures prove just the opposite. On a per-person basis, transgender troops are a burden, due to the costs associated with things such as gender reassignment surgery and ongoing hormone treatment.

Slate cited figures showing that “2,450 transgender people are on active duty (out of 1.3 million active-duty service members altogether)” and estimated that the “total cost of their health care would increase overall expenditures on health care by between $2.4 million and $8.4 million annually.”

$8.4 million extra for 2,450 troops works out to about $3,400 each, annually. That’s not trivial. Keep in mind that these figures are from a pro-transgender source, and likely underestimate the cost of transgender troops.

Slate downplayed the substantial per-person medical cost of transgender troops by making an apples-to-oranges comparison between the healthcare costs of the 2,450 transgender troops and the overall costs healthcare costs incurred for various treatments by the remaining million-plus members of the military (such as Viagra for the tens of thousands of troops suffering from erectile dysfunction).

There are also serious privacy issues caused by including transgender troops. As Beres observed:

Army training manuals developed to implement the new policy [of including transgender troops] are nearly incoherent. A PowerPoint presentation given to all soldiers begins … “We have to have access to 100 percent of America’s population for our all-volunteer force.”

The statement is ridiculous.

The Pentagon already claims 75 percent of American youth today are unfit for military service for many reasons, including obesity, drug use, criminal records, and health issues.

[A]n Army transgender training module … describes a potential scenario for a soldier who is undergoing a male-to-female gender-marker change (without sex reassignment surgery) and is placed in women’s barracks.

Transgender rights advocates claim that it would be “discriminatory and unconstitutional” for taxpayers not to pay for expensive elective medical procedures for transgender troops, such as sex-change operations.

So argues the ACLU’s Chase Strangio, who has threatened to sue if the military doesn’t pay for gender reassignment surgery and other expensive treatment. So it may be politically impossible for the military to avoid paying for such costly treatments once transgender applicants are accepted. (Strangio’s prominent presence in the ACLU is one manifestation of its fall from grace. Strangio makes little pretense of being principled, and has objected to the idea of defending the free speech rights of people he dislikes, such as right-wing writer Milo Yiannopoulos, arguing the ACLU should only defend the free-speech rights of people with more progressive views. While the ACLU still sometimes defends free speech these days, it has also attacked free speech in some other recent high-profile cases. For example, courts have rejected the ACLU’s arguments in favor of restricting the Boy Scouts’ freedom of expressive association; religious speech in private workplaces; religious publications in higher education; and peaceful picketing aimed at liberal sacred cows like abortion clinics.)

Given the historical deference the military has received from the courts in determining who to recruit, and the real costs associated with transgender troops, the courts should reject this challenge on the merits, even putting aside the fact that the challenge is not ripe yet. (For such examples of judicial deference, see, e.g., Goldman v. Weinberger, 475 U.S. 503 (1986) (upholding ban on wearing of Yarmulke, even though it is protected in civilian life; military later voluntarily changed the rule); Rostker v. Goldberg, 453 U.S. 57 (1981) (upholding men-only draft); Thomasson v. Perry, 80 F.3d 915 (4th Cir. 1996) (upholding ban on gays in the military, which was later voluntarily lifted by the military)).

Thus, judges should dismiss the baseless lawsuit of Doe v. Trump, pending in the United States District Court for the District of Columbia, as Case No. 17-cv-1597. The National Center for Lesbian Rights appears to have filed the lawsuit there because all of the judges there (except for senior judges) were appointed by President Obama (the vast majority of them), whose administration supported the recruitment of transgender troops; or by President Clinton (including the judge to whom the case has been assigned, Colleen Kollar-Kotelly). But any judge, liberal or conservative, should be able to identify and dismiss an unripe lawsuit.

UPDATE: A ban on transgender applicants is also constitutionally justifiable for the additional reasons I discuss at this link.