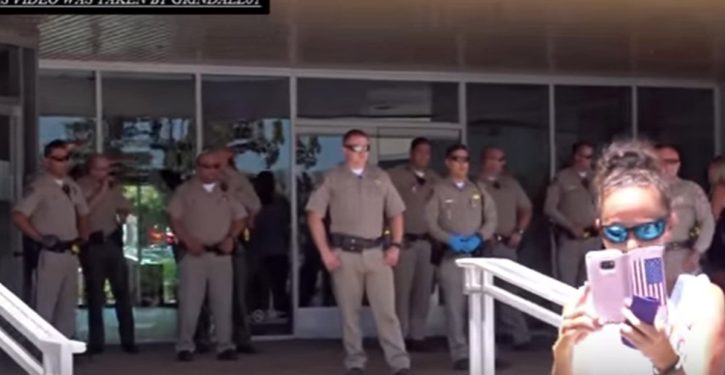 A few of the peace officers surged to deal with the Republican menace at CA Assemblyman Steinorth's office. That's a terrifying GOP thug with the pink cell phone in the foreground. (Image: Screen grab of Grindall61 video, YouTube)

How tiny was the protest by conservative Republican activists, who were letting Assemblyman Marc Steinorth (R-Rancho Cucamonga) know how they felt about his “yes” vote in July on extending California’s costly cap-and-trade program?

It involved about a dozen people, armed only with a few cardboard signs, some cell phones, and a bullhorn.

Granted, they did enter Steinorth’s office suite – peacefully, and at the invitation of an office worker – and then proceed to give Steinorth’s representatives a piece of their mind.  (You don’t have to take their word for how peaceful it was; it’s all on video, below.)

But the incongruously massive response of the California Highway Patrol and the San Bernardino County Sheriff looks over-the-top deranged.

In the video, there are dozens of officers deployed to deal with the menace of a few middle class, middle-aged people in leisure wear and sneakers, showing up to express themselves for 15 minutes.  The patrol cars with flashing lights are arrayed all over the parking lot outside the assemblyman’s office.

And apparently, there were at least 30 officers on the scene: 20 from CHP and 10 from the sheriff’s department.

Moreover, CHP had followed the little group from the event they originally planned to protest, a fundraiser for Assemblyman Chad Mayes (R-Yucca Valley), who had also cast a “yes” vote on cap-and-trade.

(Republican voters are particularly disgusted with their GOP representatives in Sacramento, because without their votes – one in the state senate and seven in the assembly – the job-killing, economically destructive cap-and-trade extension would not have passed.)

The Mayes fundraiser was cancelled at the last minute.  So the protesters decided to visit Steinorth.  The alert CHP pursued them to Steinorth’s office, and on arriving, a CHP officer called for backup.  That’s when the horde of armed law enforcement officers descended on the complex where Steinorth’s office is located.

According to the Mercury News:

A CHP officer who arrived at the planned Mayes protest followed the group to Steinorth’s office, where he called for backup, Rancho Cucamonga CHP Sgt. Tom Graham said Monday in a telephone interview.

That’s when a bevy of CHP officers and sheriff’s deputies began arriving at Steinorth’s office in cars, SUVs and on motorcycles, cramming the parking lot, to the surprise of protestors.

CHP and the sheriff were very proud of themselves:

“It appears they were being disruptive and refused to leave the office when asked to,” Bachman said in an email.  [Watch the video and decide for yourselves. – J.E.] “Once we determined there was no emergency and/or violence, deputies left and those not already there diverted to other activities.”

Graham said the reason so many CHP responded to the call was because officers were in the middle of a shift change – some were headed into the field and others returning – when the call went out, resulting in many of them winding up at Steinorth’s office because they had no other calls to respond to at the time.

Well, except that CHP had followed the protesters from the Mayes fundraiser site to Steinorth’s office.  And there’s a helicopter patrolling overhead.  You don’t just make that happen without a little bit of planning.  (See just after the 6:00 mark in the video.)

In the video, there’s no evidence of a CHP officer being inside the Steinorth office suite to see what was going on, until the actual massive deployment has already staged, and a couple of officers enter to escort the protest group out – through a gauntlet of burly armed men.  (When the intervening officer arrives, the protesters are in a conference room, sitting in an entirely unmenacing manner, some with their bare summer legs in shorts crossed, cracking jokes.  The lunacy of a crisis-level response to this situation can hardly be overstated.)

It appears the CHP officer who called for backup called for it solely because he saw the dozen or so protesters go into the building.

The protesters found themselves laughing at the ridiculous nature of the armed response as they left.  And even some of the officers can be seen grinning at the absurdity.

But it is a serious problem that this little group of peaceful protesters bore no resemblance whatsoever to the kinds of protesters who have tended to become violent in recent months – and yet they were treated as if they might start swinging pipes and using pepper spray.

Contrast this event with the one in Portland, Oregon on Sunday (6 August), when opposing demonstrators held rallies and ended up in fistfights with each other.  The groups were radical leftists under the Antifa banner, and a right-wing organization called Patriot Prayer, which was holding a “Freedom March.”  A third group, leftist in character but with no history of protest violence, ended up at one point being caught in the melee.

I’m embedding a couple of videos so you can decide for yourselves what happened, and lay blame if you want to.  Myself, I don’t feel an affinity for either group in this mix.  The whole passel of them, right and left, just look like a bunch of people out cruising for trouble.

But the most noticeable thing in this entire episode is that the police stood by – you can’t even see them in the videos – and let the fights between Antifa and the Patriot Prayer group erupt, with no apparent effort to stop them.

This is reminiscent of the same pattern at previous protests where Antifa was present, and/or where Trump supporters were attacked.  It famously happened in Berkeley in April and Seattle in June, as well as a pro-Trump rally in San Jose in 2016, and another one there in March 2017.

In Berkeley and San Jose, city officials actually affirmed afterward that the police had been told not to step in to prevent attacks on Trump supporters or other right-wing demonstrators (e.g., people rallying in support of Milo Yiannopoulos, an invited speaker at UC-Berkeley in April.  See links).

Portland has also become notorious for letting Antifa exercise a hecklers’ veto over the activities of others, even canceling its annual Avenue of Roses Parade in April, after Antifa threatened a Republican group that was scheduled to participate.

Not all cities are letting Antifa attack at will.  Philadelphia, for example, mounted a creditable response to Antifa violence in early July.

But there is something very wrong – and it’s not with peaceful protesters or the ordinary people of America – when police departments take a one-sided, hands-off approach to restraining actual violence, and yet surge in force to the site of a tiny, peaceful protest by the least scary gathering of Republicans since Pat Nixon hosted a GOP ladies’ tea in 1972.

Study: Millennials are poor and work-obsessed
Next Post
As a means of reducing stress over grades, U. of Ga. prof allows students to do this 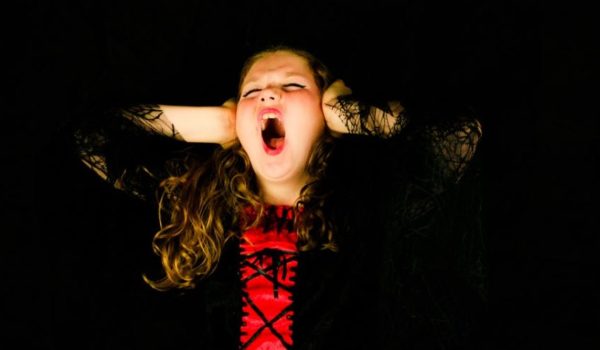