Yesterday, Sen. [score]John McCain[/score] (?-Ariz.) pounded the final nail in the coffin of the GOP’s seven-year crusade to rescue the American people from the burden of Obamacare:

McCain, in the early hours of Friday morning, voted against his party’s scaled-back version of an Obamacare repeal, becoming the decisive vote preventing the GOP from succeeding on its top agenda item and throwing its legislative agenda into deep uncertainty. The Arizona Republican, along with Maine Sen. Susan Collins and Alaska Sen. Lisa Murkowski, joined all Democrats in opposing the legislation gutting key portions of the ACA. …

But that wasn’t McCain’s only thumb in his party’s eye. The day before, he posted on his Senate website several paragraphs of blather on why Donald Trump was wrong to intimate on Twitter that he will seek to restore the ban on transgenders serving in the military. Wrote McCain:

Any American who meets current medical and readiness standards should be allowed to continue serving. There is no reason to force service members who are able to fight, train, and deploy to leave the military — regardless of their gender identity. We should all be guided by the principle that any American who wants to serve our country and is able to meet the standards should have the opportunity to do so — and should be treated as the patriots [sic] they are.

He went on to mention a study underway at the Department of Defense to determine the cost to American taxpayer of funding sexual reassignment surgeries over the long term if the ban remains lifted. The senator might have consulted his colleague in the lower house, Vicky Hartzler (R-Mo.), who has already accumulated data in this area. According to her own congressional website, the conservative estimate is $3 billion over a ten-year period.

Putting aside cost, McCain and his liberal cohorts are evidently unaware that even more damning data are in. A study of transgender military veterans conducted in 2014 found that their rate of suicide is very similar to that of veterans suffering from schizophrenia or serious depression.

The research of the general population of transgender individuals (TIs) so far indicates a troubled and disturbed community. Suicidal ideation — a mental obsession with self-destruction — reaches as high as 60% in the general transgender population, and the risk of attempted suicide is fixed at 30%. The 30% figure has remained stable over multiple studies in Europe, though much more evidence is available regarding violence, rates of HIV infection, smoking, and prison time.

But the problems don’t stop there. As my colleague, J.E. Dyer noted in a post last year, transgenders — at least some — have special emotional needs that normal (used here strictly in the literal scientific sense) people may seem insensitive to.

She cites an example from a Washington Post column from around the same time that illustrates this point:

In one case, Army Sgt. Shane Ortega, a transgender man, was required last summer to go to a uniform shop where he was stationed at Schofield Barracks in Hawaii with a senior enlisted soldier to obtain a female dress uniform in order to meet Army officials at the Pentagon to discuss transgender policy concerns, according to Ortega and Army officials.

Ortega said the incident showed “a real lack of leadership and a lack of human compassion” and demonstrated the level of discrimination and ignorance in the military about transgender people is huge. [Emphasis added]

“I had to go through this experience at a public time … and try on this uniform in a public space and basically be humiliated because everyone in the space is going to go, ‘Why is this male soldier trying on this female uniform?’ ”

“The absurdity here,” as J.E. wrote, “is the idea that there’s something mean-spirited and anti-transgender about the military’s longstanding, universal practice of prescribing a uniform for an event, and expecting everyone to show up in it.  If Ortega enlisted as a woman, there is nothing unfair or insensitive about expecting Ortega to wear a woman’s dress uniform.”

The problem with continuing the policy on transgenders in the military implemented during the Obama years is that the entire movement is in transition. Adding to the problem is that the science on whether transsexualism, which just a few years ago was considered deviant behavior, continues to point in that direction, protests from the Left notwithstanding. Paul R. McHugh, a professor of psychiatry at Johns Hopkins University and head of the institute that pioneered sex-change surgery, has argued that “transgendered men do not become women, nor do transgendered women become men.” In McHugh’s view transgenderism is a mental disorder is now and always has been a medical disorder.

Russia seizes American property in Moscow in retaliation to fresh sanctions
Next Post
Cartoon of the Day: Be prepared 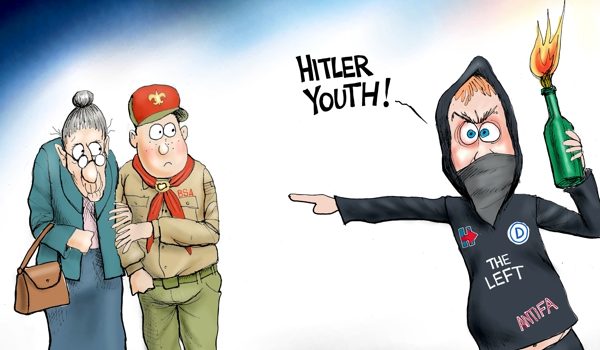