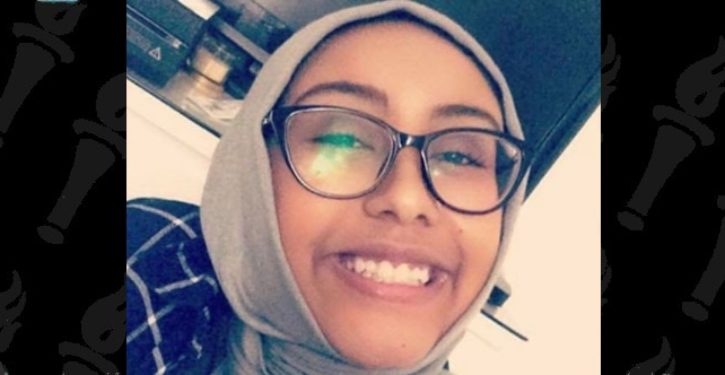 In the aftermath of the brutal beating and death of a teenage Muslim girl in Virginia, liberal activists and some civil rights organizations rushed to frame the killing as a hate crime.

Many said that Nabra Mohmod Hassanen’s killer was obviously motivated by loathing for Muslims, one of many minority groups suffering under the “climate of hate” that President Donald Trump’s administration has created.

The storyline began to collapse when The Daily Caller and other outlets reported that the alleged killer, Darwin Martinez Torres, was not a white supremacist bigot, as some alleged, but rather a 22-year-old illegal immigrant from El Salvador. Despite the total absence of evidence of a hate crime — Fairfax County police called it a “road rage” incident — many commentators continued to insist that Hassanen’s murder was an illustrative example of bias against Muslims in American society.

“It may well be true that in the case of Hassanen, no verbal slurs were exchanged.… But it’s nonetheless equally true that Torres’s choice to harass a group of visibly Muslim teenagers cannot help but tie into a wider discourse about the roles and acceptance of Muslim Americans,” wrote Vox’s Tara Burton.

Progressive activist Jose Antonio Vargas, himself an illegal immigrant, was quick to invoke Islamophobia as well:

just reading up on the tragic death Nabra Hassanen. totally heartbroken. we MUST stand up against Islamophobia

Already teetering, the narrative collapsed completely Tuesday, when new details about Torres’s background emerged in media reports. As it turns out, Torres allegedly killed Hassanen not because he didn’t “accept” Muslim Americans, but because he is a suspected gang member with a history of violence toward women.

A week before Torres was arrested for the murder, he allegedly beat and sexually assaulted a Loudoun County woman, according to a Child Protective Services report shared with the Washington Post. The woman told emergency room staff that a man punched and kicked her in the presence of a child, and that the assailant, whom she declined to identify by name, was a member of the violent MS-13 street gang.

Authorities were able to identify Torres as the attacker in that incident, following his arrest for Hassanen’s murder. As the Post article noted, the CPS report confirms that Torres has previously committed violent acts “unrelated to a hate crime motivation.”

Ironically, WaPo was one media outlet eager to attribute the Hassanen murder to a supposedly pervasive atmosphere of hate across the country. In a June 19 piece, Post columnist Petula Dvorak called the killing “an attack on all of us,” adding:

Nabra was killed by some kind of toxic mix of hate and rage, there’s no doubt about that — even if it doesn’t meet the legal definition of a hate crime.

The selective outrage from Vox, the Post, and other news outlets over Hassanen’s murder stood in stark contrast to the relative indifference showed to other killings across the country. The same day that Dvorak’s column ran, Chicago police confirmed that eight people had been killed over a single, bloody Father’s Day weekend.

One of the victims, Tiara Viramontes, was a 17-year-old high school student like Nabra Hassanen. Police suspect that she, too, was killed by a gang member.

Unlike the Hassanen murder, however, Viramontes’s death didn’t lend itself to provocative takes on white supremacy or lamentations about the rise of Islamophobia in America, and thus received no attention from the national media.

One-time idol of the Left Bob Woodward chides NYT, MSM: ‘Fair mindedness is essential’
Next Post
Paris residents kept awake at night by the noise from the loudspeaker of a mosque