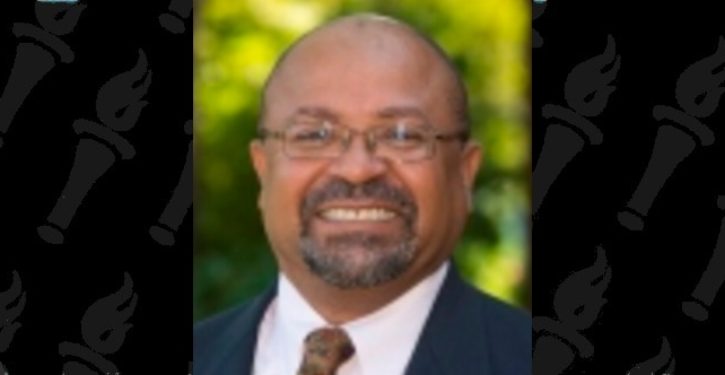 Better late than never, one supposes. According to Campus Reform, Trinity College has finally reacted to a series of profane and racist rants against white people posted to Facebook by a black member of its faculty. That individual,  Prof. Johnny Eric Williams has been placed on leave “effective immediately.”

“Immediately” here refers to the timing of the decision to take action, not the timing of the comments, which were posted on June 18. A portion of one of several posts, which was accompanied by a photograph of House Majority Whip Steve Scalise, read:

It is past time for the racially oppressed to do what people who believe themselves to be ‘white’ will not do, put end [sic] to the vectors of their destructive mythology of whiteness and their white supremacy system.

In the announcement that disciplinary action was being taken against Williams would be put on leave, Trinity President Joanne Berger-Sweeney wrote that a “review … of the events concerning Professor Williams will continue,” adding:

Meanwhile, I want to take care to note that the principles that underlie this particular set of events go far beyond the actions of any one person. These involve principles that concern how we think about academic freedom and freedom of speech, as well as the responsibilities that come with those fundamental values. It’s true, too, that as scholars and citizens, and as individuals and as a community of higher learning, our roles in and relationship to social media and the public sphere are complicated. We must be able to engage in conversations about these difficult and complex issues, and Trinity College and other places like it are precisely where such conversations should occur. I, for one, welcome them.

Something tells me that if the racist screed had been posted by a white professor regarding the need to “end” blacks now, the principles that underlie the set of events wouldn’t apply, much less merit mention.

Why the CBO claim that 15M will lose medical coverage is misleading
Next Post
Social justice benefits? Liberal-run companies paying workers to protest