As an indication of how opposed California is to President Donald Trump’s wall along the U.S.-Mexico border, the state legislature is considering a bill that would blacklist contractors involved in such a project.

According to The Mercury News, Senate Bill 30, authored by Democratic Sen. Ricardo Lara “is one of two bills taking aim at contractors who choose to work on the border wall. Assembly Bill 946 by Assemblyman Phil Ting, D-San Francisco, would force the state to drop its pension investments in any companies involved in the project.”

It’s safe to say that bureaucrats in the Golden State hate walls built to keep out interlopers. Or do they? CBS SF/Bay Area reports that the California Department of Transportation (Caltrans) has hit upon a solution for keeping unwanted homeless people from encroaching on their land. The solution? Build a strong 8-foot-high wall to keep out the riffraff.

Laura Nunez, who has lived on Macredes Avenue in San Jose most of her life, said everything changed on her street when homeless people began using the rickety chain link fence at the end of the block as a doorway to their encampments along I-280.

“Every time Caltrans would come out and repair it … as soon as they left they cut a hole in it and they just use that … that was their main access point to go in and out,” said Nunez. “We’ve had to live with their garbage. We’ve had to live with drug paraphernalia. The kids haven’t been able come out to play.”

The parallels between the this project and Trump’s proposal has not been lost on every Californian.

Jaime Foberg, the founder of “In Their Shoes” homeless advocacy said, “I think of Trump. And I think how horrible it is that they would keep people out. It really does make me sad.”

Pastor Scott Wagers with Cham Deliverance Ministry said, “Symbolically, I think it sends the wrong message … that a city like San Jose is kind of … positing itself against the homeless.”

But Laura Nunez has an answer for these do-gooders:

Take them to your neighborhood and you live the way we’ve been living the past few years, and then you’ll sing a different tune after that.

Meanwhile, anyone else here getting a whiff of double standard? 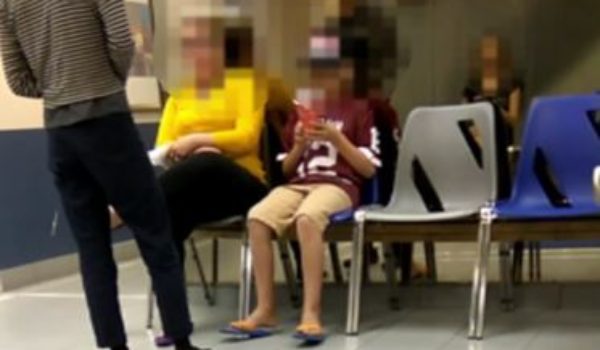 Mother caught on video demanding ‘white doctor’ treat her son, gets a tongue-lashing in return
Next Post
Top election official: ‘No credible evidence of vote tampering’ in 2016 election