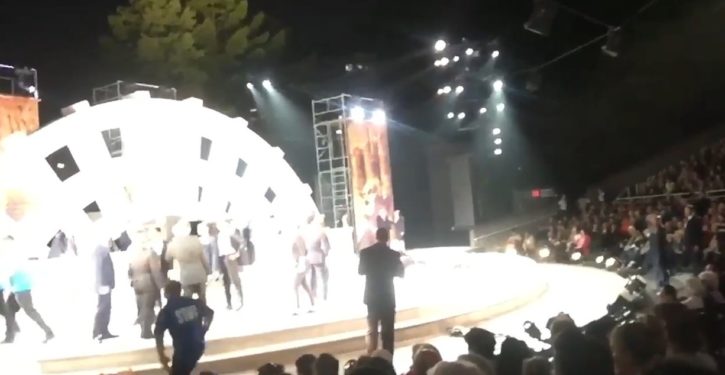 Gee, can’t a guy assassinate a president on a stage without being interrupted by protesters?

The play has been losing sponsors due to its, er, cutting-edge artistic choice.  Neanderthal-minded Philistinism is rampant.

Now, activist Laura Loomer of Rebel Media has been arrested after rushing onto the stage during the performance on Friday, 16 June, and shouting, “Stop leftist violence!”  (H/t: Gateway Pundit)

Her fellow activist, Jack Posobiec, appears to have been in on the plan.  He was present at the performance, and after Loomer rushed onto the stage, and security was called to escort her off, he stood up and began hollering at the audience: “You’re all Goebbels!  Goebbels would be proud!”

Security was dispatched to remove Posobiec too.

He and tweep Mike Cernovich are keeping #FreeLaura going on Twitter, as she awaits processing somewhere in NYC.  (Where isn’t clear.  Apparently she wasn’t at the nearest NYPD precinct.  We are to understand someone is looking for her with the Park Police.)

But at least one point is worth making about this little event.  It’s that there can be absolutely no sanctimony about the sacredness of artistic license, when it is abused as it is in this production of Julius Caesar to produce deliberately partisan political shock.

If you want the people to not care about artistic freedom, depicting the president being assassinated – especially in such an utterly gratuitous manner – is an excellent way of striving for that end.  (It’s Julius Caesar, for crying out loud.  Trump bears no resemblance of any kind to the title character, which is something average high school students used to know.  The only thing achieved by making Julius Caesar a Trump look-alike is the opportunity to depict Trump being stabbed on stage.)

I suspect that neither side in this little drama has fully exhausted the patience of the sorely-tried American.  We aren’t ready yet to give up on either artistic license – as long as only those who support an irresponsible, imbecilic choice have to pay for it – or the right of third parties to object vociferously to incendiary crap, although there’s a time and a place for that.

The whole thing is all of the following: silly, informative about the dire social situation we’re in right now, and easily settled as to the rights and wrongs.

But fake moral indignation over the play being interrupted merits only contempt.  People who want to depict the president being assassinated are just lucky there are better reasons for intellectual freedom, and their frivolously vicious production choices get to ride along on those better reasons for free.  Such insidious provocation is a parasite on the noble purposes of intellectual freedom.  It has no inherent value; it’s all cost.

It’s a cost we pay, because the noble purposes of freedom are of the highest value.  In the sense of remembering that, Loomer and Posobiec’s somewhat misdirected, basically ineffective “protest,” which the security officers clearly had the authority to shut down, does a better job reminding us than the production of Julius Caesar could.

Laura Loomer was out of line to interrupt the scene.  But Jack Posobiec, whatever his other shortcomings, is right.  Making Caesar a Trump look-alike, solely so he can be stabbed to death night after night on a stage in Central Park, is what Josef Goebbels, Nazi propagandist, would do.  An audience that lends itself eagerly to such manipulation has already sold its soul. 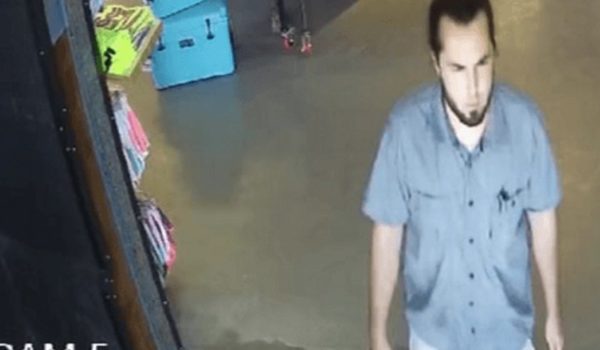 Houston: Woman filmed by man in Target dressing room says got no help from store employees
Next Post
Need to fake an orgasm but are bad at it? Help is on the way 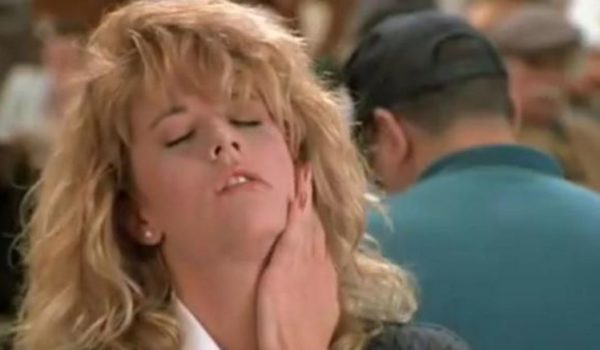