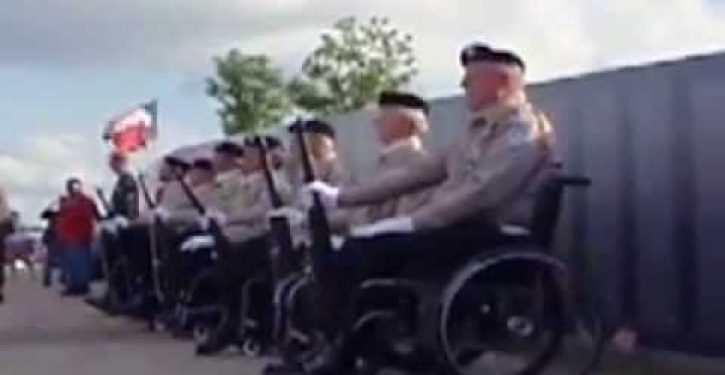 Across America, families and friends, communities and their leaders — all gather to commemorate the fallen from America’s wars.  Some have distant but vivid memories to honor, of ancestors and loved ones long passed.  Others come with fresher wounds.

All have cause to know that the deaths of their heroes — our heroes — were not in vain.

As we remember today the soldiers, sailors, airmen, Marines, and coast guardsmen who have died in our nation’s service, let us be grateful not just for their sacrifice, but for what it has meant to us.  Our blessings as a nation have never been ordinary, and the prospect of them becoming even more extraordinary lies bright and awe-inspiring before us.  Unlike any other great nation in human history, there is real reason to hope that America will once again beat the odds, and not tear herself apart, or buy a false sense of “peace” at the price of an insidious death by internal corruption and rot.  There is real reason to hope for renewal and fresh dedication.

The strainings and groanings of our political atmosphere today are a far better sign of vitality and possibility than the false decorum of our old conventions.  That decorum has papered over too much, for too long.

In historical terms, it is astounding that we have the opportunity now to see so clearly what our condition is.  It is revealed to us a little more with each passing day — but yet it is still before the peaking of an existential crisis for our remarkable polity.  There is still time to make orderly decisions, and achieve much with political courage, rather than force of arms.

What a blessing, to have the latitude for a time of national disjunction — anxious, no doubt, but necessary — and have it unpressed by existential threats from without.  There is only one being who has more credit for that blessing than the American serviceman, and that is God Almighty.

The fortunes of a nation are written in the blood of its fighting men and women.  As we honor the fallen on Memorial Day, we carry their spirits with us, as we carry their charge to us to vindicate their sacrifice, and do right with the opportunity they have endowed us with.  America has always been a nation of diversity and clamor, alongside our love for the common threads of liberty, faith, the rule of law, and country.  The hearts and minds of our honored dead were once alive with struggles and hopes that would daunt — even horrify — the younger people of today.  Yet they fought and died as they would have lived their lives: enduring hardship with hope, facing towering odds with courage, carving precious victories from an unyielding landscape of sure defeat.

They did not think this was too much to ask.  They were proud and grateful to be Americans, and to fight under our flag.  Because of their gift to us, we can be so too.  A mighty task is set before us, that America may once more beat the odds of history.  But we are a yeoman people, the freest who have ever lived; neither lord nor serf, but the self-governing and self-arming who put their shoulders to their own wheels, and for their own purposes.

Slow to arms, but mighty in battle: these are our yeoman soldiers, men and women from all races, backgrounds, and cultures.  These are the sacrificial gift-givers of our people.  As the president said of Navy SEAL Ryan Owens, who was killed in the raid in Yemen in January, their legacy is etched into eternity.  Their legacy is every breath we take in freedom and hope.  And in the different kind of “battle” we are in now, the battle for America’s future, I know that we will neither fail them, nor ever forget them.