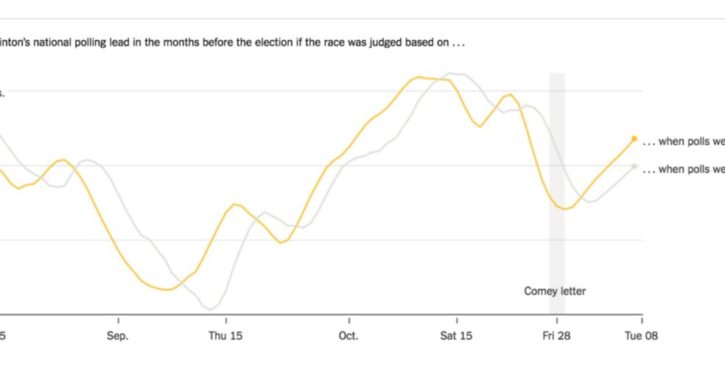 Trump supporters have always known the FBI director’s letter about reopening the email investigation didn’t influence the election. Now there is a conspicuous crack in the liberal armor. Nate Cohen of the New York Times is presenting evidence showing that the Comey letter to Congress may have had little to do with Hillary Clinton’s loss. A pollster trade organization, The American Association for Public Opinion Research, agrees with Cohen’s numbers.

There are lots of reasons why an election like this is not successful. [But] our analysis is that Comey’s letter raising doubts that were groundless, baseless, proven to be [sic], stopped our momentum.

But that belies the facts. Cohen shows conclusively that Clinton’s support began to crash before the letter was sent. The lag between when polls are taken and when they were reported exaggerated where Hillary’s support stood before Comey sent his letter.

Cohen’s investigation started with the Upshot/Siena College poll in Florida, which  he received the same day Comey sent his letter, Oct. 28. Cohen thought the poll was an outlier because it reported a 46% to 42% Trump lead.

At the time, the poll looked like a bust. There wasn’t much reason to think the result was even in the ballpark. Mrs. Clinton was ahead by six points in national polls and ahead by a similar margin in states worth 270 electoral votes, suggesting Mrs. Clinton was probably up by a few points in Florida. I can’t say I was thrilled about having to write an article about a poll that looked flat-out wrong.

But it’s now clear that Mrs. Clinton was weaker heading into Oct. 28 than was understood at the time. Several other polls were conducted over the same period that showed Mr. Trump gaining quickly on Mrs. Clinton in the days ahead of the Comey letter. And the timing of these polls — particularly the gap between when they were taken and when they were released — has probably helped to exaggerate the effect of Mr. Comey’s letter on the presidential race. [Emphasis added]

The case for a big Comey effect hinges on the large decline in Mrs. Clinton’s lead in the polls that followed the letter. In the FiveThirtyEight model, for instance, Mrs. Clinton had nearly a six-point lead heading into the Comey letter, but just a three-point lead one week later: an apparent three-percentage-point shift against Mrs. Clinton. It seems reasonable, as many have argued, to attribute much of that decline to Mr. Comey’s decision.

The ABC/Washington Post national tracking poll conducted at the same time showed Clinton’s lead had evaporated to two points, down from a double-digit lead after the third debate. Although it was administered before the letter was sent, the results were released the day after Comey’s letter was made public. 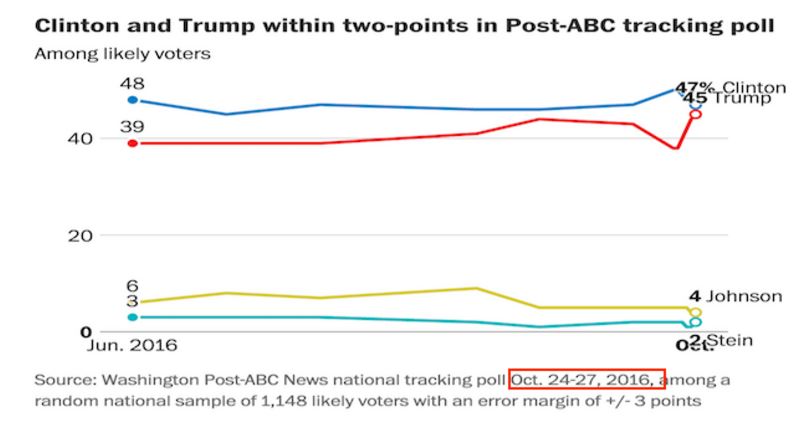 The American Association for Public Opinion Research did a major study of the 2016 presidential polling. When discussing the Comey letter, the pollsters looked at the ABC/Washington Post poll above plus four others. This analysis also highlights that Hillary Clinton’s numbers began to crash before the FBI letter, going from an average 6% lead over Trump on Oct. 22 to 2% on the day the letter was sent. 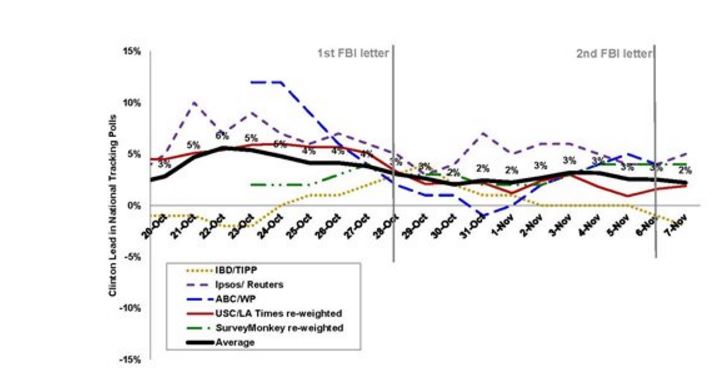 The polls seem to prove that overall Clinton’s campaign was in decline before the FBI director sent his letter to congressional leaders. 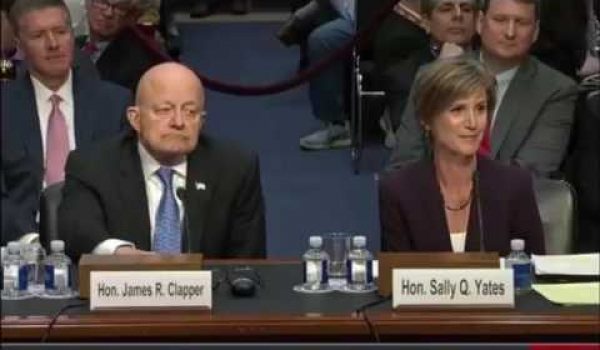 Did Obama DNI James Clapper perjure himself on Monday?
Next Post
Scientists find a ‘totally unexpected’ source of climate cooling 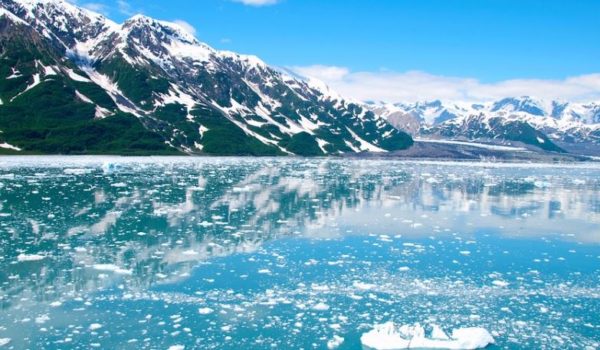