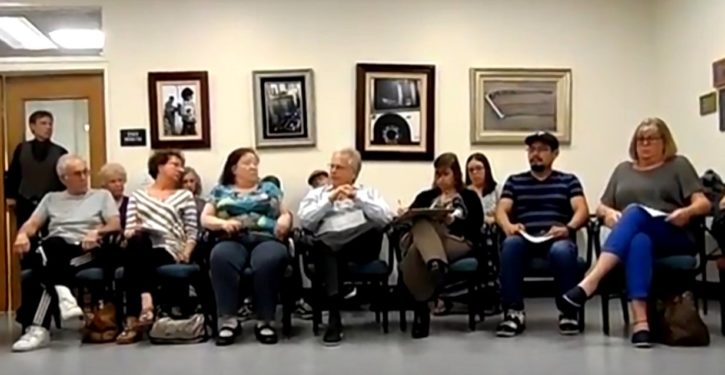 Billing itself as a “grassroots” organization, a group called the West Valley Resistance (i.e., in the San Fernando Valley) has spent the last couple of months working to get the Los Angeles City Council to agree on a Trump impeachment resolution (see here as well).

On Friday, the group’s work paid off.  The LA City Council, in a 10-0 vote, resolved that Trump “should be investigated for any high crime or misdemeanor sufficient to warrant impeachment proceedings.”

The resolution calls for the city’s 2017-18 federal legislative program to include support for any legislative action to investigate whether Trump has violated the Foreign Emoluments Clause of the U.S. Constitution or committed any other high crime or misdemeanor.

The resolution passed on a 10-0 vote. Councilman Mitchell Englander, the City Council’s lone Republican, was not present during the vote, although he was in the chamber immediately before and after.

Because that’s how the GOP rolls in California.

Conservative activist Susan Shelley, who has run for state office in San Fernando Valley (and almost won in a 2013 special election, with the deck stacked heavily against her), noted the basic idiocy of the city council’s premise for this resolution:

The alleged high crime can’t pass the laugh test. Does anyone seriously believe Donald Trump ran for president because he wanted the profits from booking foreign leaders into his hotels? Our city government is an embarrassment.

But, of course, the West Valley Resistance doesn’t care how silly it is to try to think up reasons why a city council should demand the impeachment of the president of the United States, less than four months into his term.  The purpose of groups like the West Valley Resistance, working at the city council level, is to slap the false impression of a “grassroots” resistance over what is actually a highly organized, centrally directed campaign to undermine President Trump.

The clues are all over the West Valley Resistance itself, although they seem to be missing from the Daily News report.  (LA Daily News is no left-wing/mainstream media outlet, so this is probably due to simple lack of knowledge.  At the point of the public vote, the West Valley Resistance may well have refrained from touting its ties to the usual-est of suspects on the radical left.  As a rule, LADN does offer a more center-right editorial perspective than its better-known rival, the Times.)

At the very top link, you will see that West Valley Resistance is a chapter of the Soros-linked Indivisible campaign, which since January has been organizing to disrupt the townhall meetings of Republicans across America (see here for one of the latest rounds, in northern California).  The author of the City Watch article learned of West Valley Resistance’s March meeting with LA Mayor Eric Garcetti from an ACLU website for activists.

Last Thursday’s meeting with Mayor Garcetti proved the resistance is a force to be reckoned with. As reported last week, I learned of the meeting through the ACLU’s PeoplePower site and in response to the Resistance Training webinar of March 11. Upon my arrival at City Hall, I discovered that grassroots groups are sprouting up everywhere and there is a great deal of collaboration on key issues of concern.

The meeting was called by a group called the West Valley Resistance. They are a chapter of a broader organization called Indivisible. The two focal points covered at this meeting were the request by the group for The City of Los Angeles to pass a resolution asking the U.S. House of Representatives to open an impeachment investigation on President Trump. The second request is for the City to formally adopt the status of Freedom City or Sanctuary City as defined by the ACLU’s “9 Model State and Local Law Enforcement Policies and Rules.”

So West Valley Resistance’s purpose in these local government meetings is to advocate for the specific language of proposals from national, left-wing groups.

Is that what they did with the Trump impeachment resolution?  Of course.  We could derive that from the West Valley group’s connection to Impeach Trump Now (link above and here), but we don’t actually have to “derive” the conclusion.  It’s stated in black and white by the co-leader of Impeach Trump Now, John Bonifaz, at his Free Speech for People website:

The [LA City Council] resolution was recently presented to Councilmember Bob Blumenfield by the West Valley Resistance based on a model resolution drafted by legal counsel at Free Speech For People.

Free Speech for People regards this as the latest of its triumphs, joining similar resolutions passed in other cities (emphasis in original):

Today, we reached another major milestone in our campaign. Los Angeles City Council became the seventh city to pass a resolution calling on Congress to launch an impeachment investigation of President Donald Trump. With this vote, Los Angeles joins Richmond, Alameda, and Berkeley, CA; Charlotte, VT; and Cambridge and Leverett, MA.

Los Angeles is thus, by far, the group’s biggest scalp to date.

The vote in Los Angeles was accomplished by what is anything but a grassroots movement.  Just a few of its features reveal how organized, long-running, and plugged-in it is.  As mentioned above, West Valley Resistance is a chapter of the Indivisible campaign, which is linked through the Soros-backed Action Network to many dozens of usual suspects (including the more than 50 of them involved in the Women’s March in January).  Indivisible, besides having a well-developed training and organization effort for townhall disruption, has a media campaign reaching across high-profile left-wing media sites and public broadcasting.

John Bonifaz, co-leader of Impeach Trump Now and founder of Free Speech for People (which is dedicated to overturning Citizens United), is one of the activist lawyers who represented Hillary Clinton and Green Party candidate Jill Stein in the presidential recount lawsuits in 2016.  In fact, he had participated in Soros-funded legal battles against state voting laws, in the years immediately preceding 2016.

In 1994, Bonifaz founded the National Voting Rights Institute, which for years has received funding from George Soros’s Open Society Institute and Tides Foundation, as well as the Joyce Foundation, on whose board Barack Obama was a paid member from 1994 to 2002.

Moreover, Bonifaz’s Free Speech for People website solicits donations under the umbrella of ActBlue, a progressive-left political donations clearinghouse founded in 2004.  It was used by the Obama campaign in 2008 (and again by Obama-linked PACs in 2012), and used by hundreds of Democratic candidates for office across the country up through today, along with numerous PACs and Action Network campaigns.

ActBlue became famous during the 2008 campaign for using software that allowed people to make credit card donations without any kind of verification that they were U.S. citizens – or even verification of who they were.  There was considerable evidence at the time that Obama had received illegal foreign donations to his campaign.  There was also evidence that individual donors had given far more than the law allows, by using fake names and different Zip or area codes.  The software being used, called Indigo, allowed this to happen because it bypassed the address verification and card verification requirements that govern properly secure online credit transactions – like the ones you make at Amazon, or Bass Pro, or Ulta Beauty, or wherever you shop.

Nothing had changed in the 2012 election.  The Government Accountability Institute produced an exhaustive report about that, in fact, because all the same problems were still in play.

But it does mean that we have no way of knowing where numerous small donations to this group, or any other served by ActBlue, may be coming from.  Free Speech for People doesn’t have to declare who the donors are to the IRS, under a certain dollar threshold level (levels differ from the federal standard of $5K in some states) – and thus, effectively, the organization doesn’t even have to actually know who they are.

This is who was behind the vote pushed in the LA City Council this past week.  A centrally organized network of activist groups, most of them with money ties to Soros and similar mega-donors, and many of them financed through a funny-money umbrella network, notorious for the pile of evidence that it has enabled the circumventing of U.S. law.

It’s worth noting one more point as well.  ActBlue has been one of the key sources of database information for the Obama Democrats’ “big data” approach to political organizing, which goes back to well before the 2008 election.  It includes the operation of Catalist, a company founded by Clinton crony Harold Ickes in 2006 to develop a comprehensive database of all voters in the United States.  As J. Christian Adams assures us, you are in that database, no matter who you are and what your party affiliation.

The immediately-effective anti-Trump organizing we have seen in the months since the 2016 election was made possible by well over a decade of organization and data collection on millions of people, and their interests and habits.  If any one of [score]Ted Cruz[/score], [score]Marco Rubio[/score], or Jeb Bush had been elected in November 2016, the same organization would be opposing them now, along with the Republicans in Congress.

There is nothing “grassroots” about this effort at all.  It is centrally directed, centrally conceived, and based on centrally-collated data and plans for manipulation.  David Horowitz calls it a “shadow government,” and that’s a fair characterization.  It’s always at work now.  Its purpose isn’t really even about Donald Trump; it’s about stamping out the resistance to progressivism.