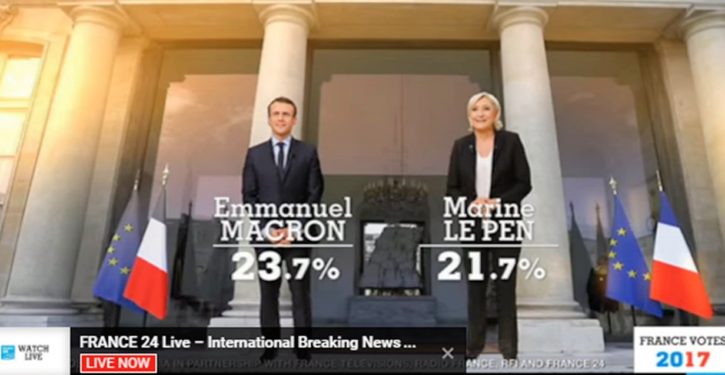 The sense of relief is palpable in the mainstream media.  Emmanuel Macron, the “center-left” latecomer in the French election, seems to be finishing in the pole position as the first round draws to a close.  National Front’s Marine Le Pen is finishing second.  A strong second, to be sure — the difference is currently about 600,000 votes — but second, nevertheless.

Polls have suggested that Macron would defeat Le Pen in a runoff.  And now that’s the head-to-head match the French voters will face in round two, on 7 May.

Center-right Republican candidate Francois Fillon — the Jeb! of this scenario — clocks in with a third-place finish, and is thus out of the runoff.  So is Jean-Luc Mélenchon, the Bernie Sanders radical in the group.  In spite of a late surge in the polling, he’s finishing in fourth place, just behind Fillon.

The oddity, as noted by numerous media outlets, is that the French Socialist Party — which successfully put up Francois Hollande in 2012 — is nowhere to be seen, its candidate (Benoît Hamon) fading in fifth place more than 4 million votes behind Mélenchon.  The Telegraph points out that between them, France’s two main parties for the last several decades — the center-right Republicans and the Socialists — have polled only 27% of the vote.

So it is fair to say that this election represents a watershed of some kind.  If Macron wins on 7 May, EU enthusiasts will take that as a ringing endorsement of globalist progressivism.  It won’t be; the combined vote tallies for Le Pen and Mélenchon — both EU-hostile — are a better gauge of that.  They show some 42-43% of French voters explicitly invested in walking out on EU-ism.  The 19-odd percent of the vote for Fillon indicates another sizable group that might best be called EU skeptics:  not anxious to break up the EU, necessarily, but willing to see France assert independence from it in some ways, and demand reforms and changes of policy.

Even Macron himself has not expressed blind fealty to an unaltered EU.  In fact, he is regarded in the media, with a respect that is very interesting for so little-known a politician, as something of an enigma.  His youth (age 39), his extremely thin political resume, and his late-breaking, out-of-nowhere surge against the sclerotic Socialist Party he came from, are reminiscent of Barack Obama’s breakout in 2007-2008.

Macron even gave his breakaway political party a downright Obama-ite name:  En Marche!  Literally a marching command — meaning simply “March!” — the name is usually translated into English as “Onward!” or “Let’s Go!”  But many observers have commented already on the similarity it bears to the iconic organizational name MoveOn in the USA — an organization wholly associated with Barack Obama, and one of his chief backers, George Soros.

That said, the political history of Emmanuel Macron’s rise in the 2017 electoral cycle is informative.  Patrick Marnham at the UK Spectator summarizes it:

His rapid rise makes Macron a genuine original in French politics and his opponents do not know what to make of him. Unlike all other serious contenders, he has no visible record of political commitment. In 2004 he graduated from the National School of Administration (ENA) and joined the upper civil service. Then, in 2008, he paid €50,000 to buy himself out of his government contract and became an investment banker with Rothschild, where he was highly regarded and quickly made a small fortune. Then, in 2012, with the election of President Hollande, his career took another unexpected change of direction: he left Rothschild to become deputy secretary-general at the Elysée. When Manuel Valls became Hollande’s second prime minister in 2014, with instructions to deregulate the French economy, Macron was catapulted into the economics ministry. …

As the months in office passed, Macron openly developed a separate political agenda, often disagreeing in public with Valls. Soon after his appointment, a mysterious movement appeared called ‘Les Jeunes avec Macron’ (‘Young people for Macron’). This was launched as a ‘spontaneous’ internet site, but quickly grew into a well-organised group numbering several thousand activists whose average age was said to be 33.

[P]arty leaders mocked his inexperience and lack of support on the left, and estimated his electoral appeal at 6 per cent.

Undaunted, the economics minister announced that he was forming his own political ‘movement’, ‘En Marche!’ (Let’s Go!), ‘open to everyone of progressive views’ and ‘aimed at younger voters’. Last August he started touring French holiday resorts appealing for a vision that would ‘re-forge the country’s politics, culture and ideology’. At the end of the month he announced his resignation, and in November he launched the presidential campaign that he must have been secretly preparing ever since he joined the government.

More recently, some Americans will be aware that Macron claims to have been targeted by…oh no he didn’t…Russian cyber-attacks and a Russian-backed “fake news campaign.”  The whole narrative deployed around the U.S. election has been dumped into the French campaign, right down to the ceaseless refrain — uttered without the slightest evidence — that Russian interference is making the voters lose their faith in democratic processes.

Read all the commentary from Macron’s party leader, Richard Ferrand (link above).  It’s laughable.  It could not have been better designed to bolster and echo the narrative woven about the U.S. election, if it had been written by exactly the same person.

Now, Macron is not the Hillary Clinton of the French scenario.  That unhappy camper would be Benoît Hamon, the usual-suspect approved face of the wheezing Socialist Party.  But Macron is the guy claiming to be the target of fake news and cyber-attacks, courtesy of the Russian Bear.  So draw your own conclusions about where he fits in the strangely-unvarying political narrative of “noble liberal progressivism” versus “scary, Russia-backed fascists picked by ignorant, racist voters.”

For my part, I can’t endorse Le Pen.  From what I can tell, she is alarming in some ways (although not in terms of simply being a nationalist).  Trump is not Marine Le Pen — but Le Pen is what Trump might be if his despisers were right about Steve Bannon and Sebastian Gorka (which, however, they are not).

People with a sensibly status-quo mindset would all prefer that more-mainstream candidates were being more successful in politics these days, both before and after the elections.

But they’re not.  Neither Macron nor Le Pen represents a long-term win for France, or Europe.  Electing either of them will merely shift the calendar date of the reckoning for unsustainable policies and institutions.  With Le Pen, the French would know with some certainty what they were getting.  With Macron, they won’t.  En avant l’arc de l’histoire, belle France.

*UPDATE*: “Anarchists” — Antifa goons — took to the streets on Sunday, mounting violent protests as it became clear that Marine Le Pen would advance to the 7 May runoff.  It isn’t clear just yet how widespread the activity is around the country.  News reporting from multiple sources indicates that the protesters went at it for hours in Paris, however, ultimately escaping the containment area the police had set up, and moving on to another part of the city, where they “smashed shop windows, bus shelters and the windows of police vehicles.”  (You can watch hours of the stuff here and here, if you’re interested.  There’s been more than just a little of it going on.)

They also set some cars on fire.

Meanwhile, Politico.eu weighed in before the election returns started coming in, with a full-throated Greek-chorus narrative about “Russia hacking the French election.”  That’s basically the headline of the post, in case you aren’t getting it through your thick skull:

How Russia hacked the French election

The headline is preserved for posterity in this screen cap, in case things go well for Macron and somebody thinks better of leaving the Russian-interference paper trail out there.

It won’t be a surprise that the author of the post, Laura Daniels, is a fellow at the Global Public Policy Institute in Berlin, a project of the Robert Bosch Stiftung.  The Robert Bosch Stiftung cooperates with the Open Society Foundation in numerous ways, including on its European Program for Integration and Migration, which advocates tirelessly for unfettered migration into Europe.  Politico.eu’s news editor is Mr. Stephan Faris, who served as an editor for Project Syndicate from 2014 to 2016.  Project Syndicate, a media organization operating out of Prague, is one of Soros’s main media projects, funded by the Open Society Foundation.  No one seems to be quite as enamored of the Russian-interference narrative as Soros-funded and Soros-linked media organizations.  They run that flag up the pole rain or shine. 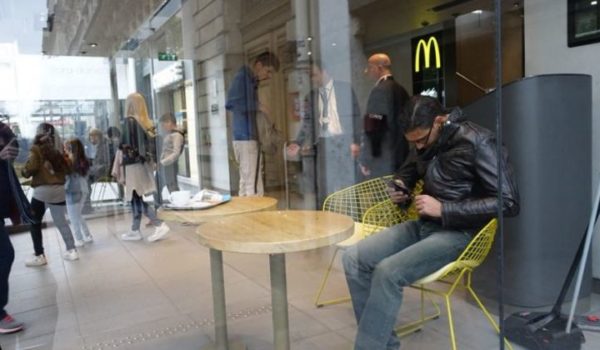 How dangerous is Paris? You can’t even get a Big Mac without going through a security check
Next Post
Would-be ‘Science Guy’ Bill Nye makes false claim about Constitution … again