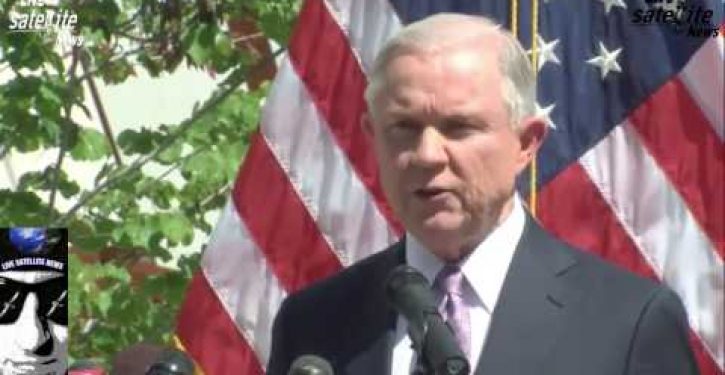 Attorney General Jeff Sessions is not mincing words. Last night he appeared on Fox News Channel’s “Hannity” with a frank message for anyone thinking of sneaking across the border:

The border is not open. Please don’t come. You will be apprehended if you do come and you will be deported promptly. If you’re a criminal, you will be prosecuted, and if you assault our officers, we’re going to come at you [like] a ton of bricks.

The message was a shorthand reprise of a policy speech he delivered in Arizona Tuesday morning in which he assured law enforcement agencies that the Trump administration would be a far different partner from Team Obama in the fight against crime.

Unlike the previous administration, Sessions said, the Trump White House would fully support and engage with law enforcement to enforce the laws of our land. He also spoke directly to the criminal and illegal alien communities, telling them all that a new sheriff was in town and that the lawlessness of the Obama years was over.

Along with his speech the AG also released a memorandum to the nation’s U.S. Attorney’s offices instructing them on the new and far more strict guidelines for prosecuting illegal immigrant crime.

Here is some of what he had to say:

For those that continue to seek improper and illegal entry into this country, be forewarned: This is a new era. This is the Trump era. The lawlessness, the abdication of the duty to enforce our immigration laws and the catch and release practices of old are over.

In that vein, I am also pleased to announce a series of reforms regarding immigration judges to reduce the significant backlogs in our immigration courts.

Pursuant to the President’s executive order, we will now be detaining all adults who are apprehended at the border. To support this mission, we have already surged 25 immigration judges to detention centers along the border. I want to thank personally the judges who answered the call to help us with this new initiative.

In addition, we will put 50 more immigration judges on the bench this year and 75 next year. We can no longer afford to wait 18 to 24 months to get these new judges on the bench. So today, I have implemented a new, streamlined hiring plan. It requires just as much vetting as before, but reduces the timeline, reflecting the dire need to reduce the backlogs in our immigration courts.

With the President’s Executive Orders on Border Security, Transnational Criminal Organizations and Public Safety as our guideposts, we will execute a strategy that once again secures the border; apprehends and prosecutes those criminal aliens that threaten our public safety; takes the fight to gangs like MS-13 and Los Zetas; and makes dismantlement and destruction of the cartels a top priority. We will deploy a multifaceted approach in these efforts: we are going to interdict your drugs on the way in, your money on the way out, and investigate and prosecute your trafficking networks to the fullest extent of the law.

Why are we doing this? Because it is what the duly enacted laws of the United States require. I took an oath to protect this country from all enemies, foreign and domestic. How else can we look the parents and loved ones of Kate Steinle, Grant Ronnebeck and so many others in eye and say we are doing everything possible to prevent such tragedies from ever occurring again.

The AG’s speech comes on the heels of the government confirming that Immigration and Customs Enforcement officers had arrested nearly 400 criminal illegal immigrants in a series of raids over the last week.

Immigration officials announced last week they detained at least 367 individuals in a series of raid operations—nearly one a day—across the country.

The arrests were announced throughout the week starting last Monday when U.S. Immigration and Customs Enforcement (ICE) officials said they arrested 153 individuals in South Texas during a 12-day operation that ended last month.

The agency said the operations focused on arresting “criminal aliens, illegal re-entrants and immigration fugitives.” These talking points are similar to the ones ICE used during the Obama administration to justify deportations, except now we know that was misleading: people without records were also detained and deported. And now the Trump administration is using that same line to conduct what appears to be more raids more often. Indeed, in at least one region of the country where raids were conducted last week, a majority of immigrants detained were charged with non-violent offenses.

Each press release sent out last week highlighted the violent and horrific crimes carried about by some of the people arrested. There were individuals convicted of rape, sex trafficking, and child abuse, ICE said.

The Trump administration is doing exactly what it promised voters it would do, much to the chagrin of liberals and the media.

Deportation notices causing panic on Harvard campus turn out to be publicity stunt
Next Post
Cartoon of the Day: Fight or flight? 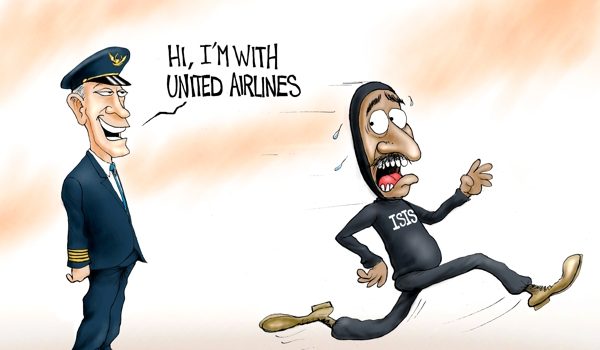