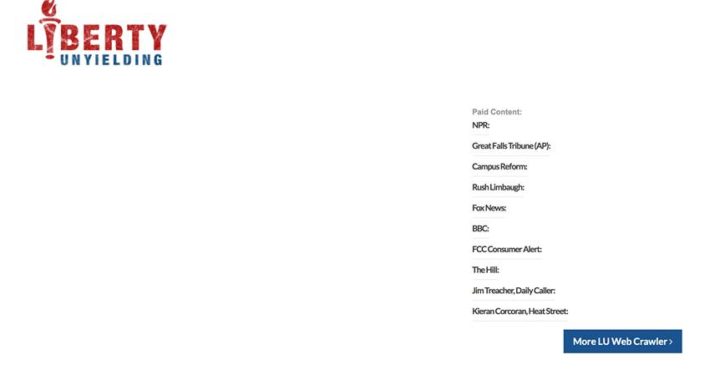 Vicious attack page that assaulted one of our cherished readers.

We here at your full-service Liberty Unyielding blog want you to have the best experience possible in our modern era of information technology and total webitude.

We’ve had some readers report in the last couple of weeks that when they try to click through to our LU content from a social media or aggregation site, they get empty white screens with a sinister-looking list on the right, apparently displaying metadata from our Web Crawler headlines.

Immediately recognizing this as a Communist Plot, we reacted with alertness and precision by grabbing some random computer parts, taking them out behind the barn, and pumping them full of lead.

Later, we consulted with the tech gurus, including our Grand Shaman of site design, Tyler Johnson.  Tyler endorsed our procedure behind the barn (I’m paraphrasing loosely on that), but also suggested informing readers that this white-screen thing happens because people have ad-blockers turned on, and new releases for ad-blockers and the websites you’re trying to visit can sometimes come in conflict for a period of time.

Straight from the Grand Shaman, here is an oracle to help you navigate the freaky white screen problem if it occurs for you:

This is a well-known issue and it has to do with ad blockers. One of the most widely used ad blockers released an update a couple of days ago that is causing issues across all sorts of different mediums, so it’s not something we can actually fix. It’s an issue with the readers’ computers. The readers have two options for resolving the issue:

1. They can disable the ad blocker entirely. In my opinion, this is the best thing to do. With ad blockers enabled we get zero revenue and so they’re essentially reading your content for free [defeating the revenue stream that keeps us in business].*

2. I believe they’ve output an update for the ad blocker that resolves this issue. I’m not sure how to apply it because I don’t use ad blockers. Possibly restarting their computer might address the issue or they could check into their extensions (Chrome) or add-ons (Firefox), depending on their browser, for an update that might fix it as well.

A brief note on my own experience.  When I used Firefox, I found it virtually essential to use an ad-blocker.  It was a pain, which is one reason I switched to Chrome.  For some reason, Chrome seems to do better if you aren’t using one.  Since I often have to visit hundreds of websites every day, it’s actually better to not have an ad-blocker on.  (I use an adware/spyware-defense program to regularly clean up my computer after the fact.)

When I was using an ad-blocker, I found that it usually took between about 3 and 10 days for a new release of either the ad-blocker or a website’s hosting software to re-sync with each other.  We’re on a standard WordPress host here at LU.

Our Empress of social media, Tanya, adds that you can always try clearing your Internet cache (in your browser).  That may fix the problem, at least some of the time.