Make that “freedom fighters’ perspective.” As long as we’re being politically correct, we might as well go all the way.

The College Fix has the particulars:

A recent assignment in an international studies course at Iowa State University asked students to write a historical account of the 9/11 terrorist attacks from the perspective of Al-Qaeda.

“Write a paper that gives a historical account of 911 from the perspective of the terrorist network. In other words, how might Al-Qaeda or a non-Western historian describe what happened,” stated the assignment….

“Don’t worry about the fact you don’t agree with the terrorists, the point of the exercise is to consider completely different perspectives,” the assignment adds.

Don’t worry about anything. Be happy.

According to the author of the essay question, the assignment is intended as an exercise in “thinking outside the box.” Thinking outside the box something that liberals excel at whenever reality comes crashing down on their preconceived world view. They look for the silver lining in acts of depravity, which leads them to observe, as CNN political analyst Marc Lamont Hill did for example in late 2014, that “people behead for all sorts of reasons.” Hill was attempting to provide a rational explanation for why a Muslim convert in Oklahoma decapitated a co-worker seemingly out of the blue. His co-panelists, realizing that Hill’s utterance might be viewed as the idiotic formulation that it was, quickly chimed in with a more plausible explanation for the horrific act: workplace violence.

Workplace violence, a frequent go-to among liberals, was also posited as the driver behind the assassination of 14 civil servants in San Bernardino, Calif., in December 2015. This time, there were additional factors behind the massacre orchestrated by Syed Rizwan Farook and his wife, Tashfeen Malik. Chief among these was Islamophobia. According to David Chesley, a Farook family attorney:

There was information about the fact that his coworkers kind of made fun of him, for example, and his beard.

Never mind that ISIS put out a statement to the effect that Farook and Malik were “our followers.” That claim is not outside the box. 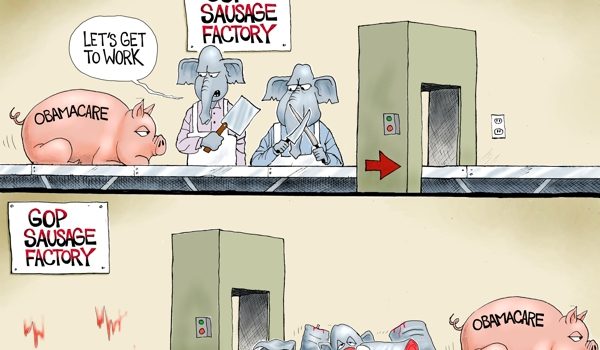 Cartoon of the Day: Collateral damage
Next Post
40 police officers beheaded in Congo