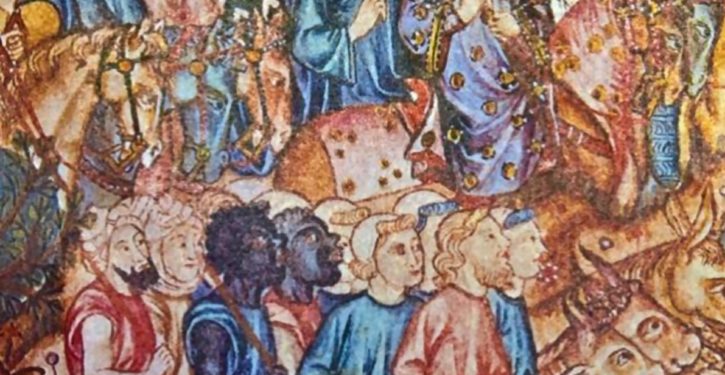 You will quickly understand the concept of proleptic dhimmitude, I promise.  What is worth much more than its weight in gold is going through the thought process behind it.  Proleptic dhimmitude explains a great deal about the state of Western civilization as a whole today.  It applies to more than a person’s attitude toward Islam.

Dr. Richard Landes, recently a professor at Boston University who now works as a historian in Jerusalem, has a superb post out today at his blog, The Augean Stables.  In it, he provides his definition of “proleptic dhimmitude” (which I believe he coined), and offers a very illuminating exercise for detecting it in yourself.

Let’s go right to the definition:

I define proleptic dhimmitude as taking on the requirements of dhimmitude in anticipation of Muslim rule. Thus, appeasing Muslim demands for dhimmi behavior before there is any conquest (the normal conditions for imposing dhimmitude). In this case the key (initial) demand, is that infidel show respect for triumphalist Muslims and not criticize them, or their religion. That according to Sharia, is blasphemy, like the Danish Cartoons.

I’m assuming we all know what dhimmitude is.  Regarding “proleptic dhimmitude,” the adjective comes from the term “prolepsis,” for which the Google search-engine dictionary has a most serviceable definition (emphasis in original):

[T]he representation of a thing as existing before it actually does or did so, as in he was a dead man when he entered.

If we were to apply that in principle to dhimmitude, we might write:

Modern Western man was a dhimmi the minute the jihadis appeared on the distant horizon.

Landes takes us through some exercises in detecting proleptic dhimmitude, of which I will cite just one here.  I recommend checking out the whole set of propositions at his post.  Here’s the example, which starts with a quote from a virulently anti-Israel, “pro-Palestinian” activist in the UK (Tony Gratrex):

The Zionists’ militarist mindset is evidently motivated by the ethnocentric myths of Jewish victimhood. World-conquering Neocon-Zionist belligerence is driven in large part by the religious adherence to the official propaganda of the victors of World War II.

What Landes does is invert that to make it about radical Islam and “Caliphater” Muslims; i.e., jihadis (whether violent or mainly political) who labor to bring about the political vision of a caliphate.  Emphasis in original:

The Islamist’s militarist mindset is evidently motivated by the ethnocentric myths of Muslim victimhood. World-conquering Caliphater belligerence is driven in large part by the religious adherence to the official propaganda of the losers of World War II.

As Landes points out, the resulting statement is accurate.

That, alas, is a pretty accurate statement, to which one might add the role that an own-goal, lethal Western journalism, obsessed with images of Muslim victims of Israeli violence, contributed to that sense of global victimization.

He goes on to perfectly encapsulate the meaning of proleptic dhimmitude.  Emphasis mine:

But it would be unthinkable in the Western public sphere today, to openly make such an observation, despite the widespread tolerance for the projective meme of Israeli/Jewish malevolence.

That’s it, right there.  The principle of free speech allows people to say the most awful, disparaging – false – things about some groups of people.  But it is “unthinkable” to speak the truth about radical, Caliphater Muslims.

It has been made unthinkable already, while we in the West still walk our streets mostly – although not entirely – without fear of physical brutality from a medieval caliphate’s enforcement squads.

The own-goal, lethal Western journalism is an important element of the proleptic enforcement which in fact is practiced by the West’s dhimmi leaders.  Landes summarizes their role:

After all, what do dhimmi leaders do? They urge their people not to insult Muslims or anything to do with Islam. In their efforts to appease their protectors, they

1. fall silent about Muslim offenses and attack those who do discuss them;

3. fall silent about the terrible, grotesque, anti-intellectual attacks on Israelthat completely ignore the victims in their eagerness to attack the victimizer’s scapegoat.

Barack Obama and Hillary Clinton, who preemptively equated criticism of Islam or Muslims with “slander” and “defamation” (see here as well), were themselves examples of this dhimmi leadership.  A material consequence of officially eschewing all critical views of Islam has been the failure of law enforcement to foresee major terrorist attacks in the U.S., in spite of prior clues about the perpetrators.

A general state of Western prolepsy

Proleptic dhimmitude clearly carries dangers.  But it is equally important to recognize that our own Western society has for decades been cultivating a more generalized proleptic dhimmitude, with its rigorous enforcement of “political correctness.”

Anyone who is happy to see others come under official sanction for politically incorrect opinions is a friend of this generalized dhimmitude.  Note that the word “official” is essential to what I am saying.  For dhimmitude to exist, it has to be imposed by institutions with power to either reward or harm us.  Such institutions include the branches of government – especially bureaucrats and judges – but also include employers, universities, licensing authorities, and the media, from the editorial decision-makers at Facebook and Google to the editorial board of the New York Times.

The dhimmitude of political correctness comes from the metastasizing social dynamic in which, at the hand of such institutions, a person is pilloried, shunned, economically penalized (e.g., sued, fired), and even forced into re-education (e.g., mandatory “diversity training”) and ceremonial recanting, on pain of losing options for much of his future life if he doesn’t.  Literal exclusion from professions, businesses, and forms of employment is a very real penalty.

The principle on which political correctness has come to operate is that of dhimmitude, which relies on holding segments of the population perpetually at risk.  Targeted persons aren’t under constant assault.  Rather, the risk of organized, institutional assault is always present.  It can be launched at any time, by a variety of actors, as long as their premise is an approved one; e.g., that “Christians are LGBT-phobic,” or “men are inherently rapists.”

The reaction of self-defense is to assume the mantle of dhimmitude: to avoid speaking the truth, if it would come across as criticism; to self-censor in general so that nothing sounds like criticism; to pay the jizya of ritual affirmations on demand (i.e., say politically correct things when you’re required to, even if you don’t believe them); and to put your head down and look the other way when someone who has gotten out of line is dealt with harshly.

But for Westerners, in particular, it is indispensable to recognize that proleptic dhimmitude has come so easily for many of us because we have been preparing ourselves for it.  We – who once prided ourselves on intellectual freedom – now penalize and impose harsh sanctions on independent, unapproved thought.  Instead of tolerating debate on disputable matters, we chant “racist” and “homophobe” and “hater” at the unapproved among us like the schoolboys in Lord of the Flies chanting “Kill the pig!”

That, at least, is the behavior fostered by our big social institutions today: government, schools, and media.  It would take a whole separate post to outline how the very foundations of intellectual freedom – Judeo-Christian and secular Western philosophy – have been inverted to justify politically correct dhimmitude.  But that point too is an essential one.  We have taken our own best ideas and turned them on their heads to justify rigidity and intolerance.

It is less and less fruitful to contrast the post-modern West with Caliphater Islam, because mechanically, in terms of intellectual conformity and enforcement on “infidels” or dissidents, they operate in much the same way.  What they propose to enforce is, increasingly, a mere detail.  Becoming suited for dhimmitude under one suits us very well for the other.  If we want to know the origin of proleptic dhimmitude, our civilization, in the guise it now deliberately assumes, can start by looking in the mirror. 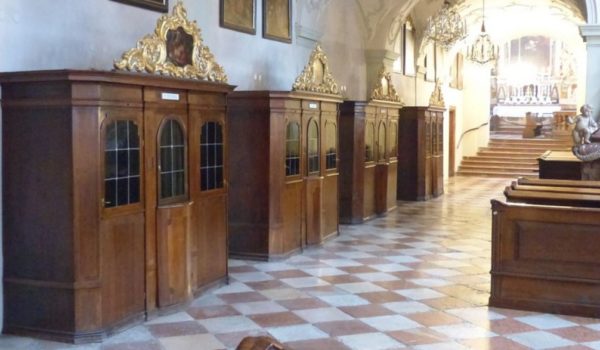 Students own up to their ‘sins’ at ‘masculinity confession booth’
Next Post
New hypothesis: Eating fruit gave us bigger brains, vaulted humans over lower animals