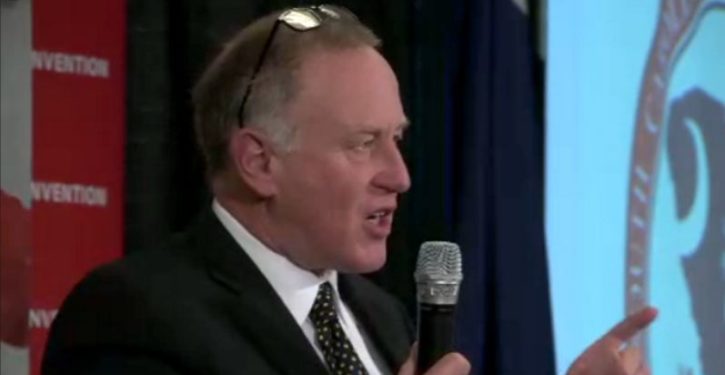 America used to be world-renowned for resolving our political differences at the ballot box and then having a peaceful transition of power, despite fundamental disagreements.

But Trevor Loudon, a New Zealander who has studied the radical left for some 30 years, says he is watching an escalating number of radicals foment hate, violence, and chaos by any means necessary to destroy the American constitutional way of life. These “ain’t college students; they’re professionals.” He hopes more Americans are connecting the dots and paying attention.

The author of “Enemies Within,” Loudon was featured in a recent documentary created by the Capital Research Foundation called “America Under Siege: Civil War 2017.” The film asks the question, “Who was behind the inaugural protests against President Donald Trump?” The answer turns out to organizations and professionals like Teresa Gutierrez of the Workers World Party, who proclaims in the film, “this is the revolution that will take Donald Trump down and make America a socialist country.”

No doubt, Loudon says, some of the radical left in the “resistance” aim to push their disruption to the point of social and economic breakdown, and a weakened police force, so as to get an all-out revolution. But the short-term objective, he maintains, is “to terrorize the squishy Republicans” with shadowy, paid protesters, a corrupt media, and mass manipulation by the Bernie Sanders-Tom Perez-Keith Ellison-Barack Obama radical Left that suddenly lost its power. These forces seek to bring about disunity in the Republican ranks using escalating fear and political correctness.

Loudon contends that if Trump is supposedly soft on the Russians, it seems strange that hardened radical revolutionaries, including many communist and socialist groups, some of which are funded by Putin’s allies, are behind the most vicious and violent protests against Trump.

Happily, the Right is not going down without a fight. Loudon cites a poll by John McLaughlin conducted in February for Secure America Now that shows growing bipartisan weariness with the manufactured outrage by the Left.

Did you notice the cultural pressures against any criticism of President Barack Obama as the first black president advanced a progressive agenda to fundamentally transform the nation? No criticism of Trump, on the other hand, is off limits in the cultural orthodoxy that treats this president wholly different than the last one. Impeachment, violence, boycotts, mental instability, and slurs are leveled against Trump without any awareness of a double standard — a double standard apparent to the Trump voters.

It does not even have to be true. Charges just must help discredit Trump in the eyes of the public, weaken him, and delegitimize him. Loudon quoted Lenin as saying, “We must vilify and incite hatred against those with which we disagree.”

Loudon is known for speaking around the country to empower citizens and galvanize them to speak up and fight back against those who wish to fundamentally transform America into a socialist utopia. He implores Americans who want to leave Washington to the politicians now that they helped elect Trump and Republicans to stay engaged. “We have been granted a miraculous reprieve in President Trump’s election.”

Citizen activism is needed, he says, to back up Trump’s mandate and pressure or oust Republican squishes. He also hopes everyone feeling despair uses social media to relay truth and help swing public opinion and keep others informed.