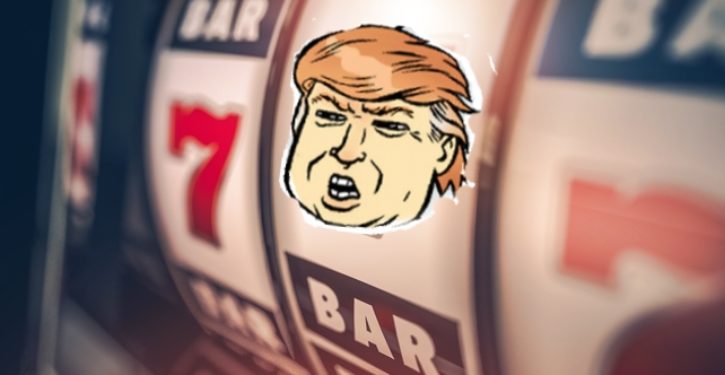 “An impeachable offense is whatever a majority of the House of Representatives considers [it] to be at a given moment in history; conviction results from whatever offense or offenses two-thirds of the other body considers to be sufficiently serious to require removal of the accused from office.”

Ford’s prescient words from 47 years ago underscore how politics drives the impeachment process through a loose constitutional framework that states:

The President, Vice President and all Civil Officers of the United States, shall be removed from Office on Impeachment for, and Conviction of, Treason, Bribery, or other high Crimes and Misdemeanors. (U.S. Constitution, Article II, Section 4)

Precisely because the Founding Fathers’ grounds for impeachment are so pliable, and the nation is so polarized, not a day passes in the media universe without one hearing or reading the word “impeachment” applied to President Trump after only seven weeks in office.

That explains why the key phrase “Trump Impeachment” yields 15,700,000 hits on Google.

Over at the Irish bookmaker Paddy Power they offer a “golden shower of Trump odds.” Among them are 6 to 4 odds that Trump will be impeached and 5 to 1 odds that his marriage will end before his presidency – all providing speculative amusement for Democrats and anti-Trumpers worldwide.

And the impeachment crap shoot is in full swing on Capitol Hill. Within the first month of Trump’s presidency, left-wing Democrats such as California Rep. [score]Maxine Waters[/score], Texas Rep. [score]Joaquin Castro[/score], Minnesota Rep. [score]Keith Ellison[/score] (now deputy chairman of the Democratic National Committee) and Maryland Rep. [score]Jamie Raskin[/score] were all singing the “I” word song. (But Rep. Raskin was so impatient he called for impeachment before Trump had even taken the oath of office.)

But my favorite “I” word story took place on the evening of Trump’s widely applauded speech before Congress. It was reported that House Minority Leader [score]Nancy Pelosi[/score], D-Calif., said, “There are plenty of grounds right now for the current president” to be impeached. But “many of the president’s supporters are not ready to accept the fact that their judgment may not have been so great in voting for him.”

Pelosi’s statement explains why she remains House minority leader, since denigrating the judgment of 62,979,636 Trump voters is not smart politics.

Democratic leaders whipping up impeachment hysteria are assisted by a complicit media with a proclivity for manipulating impeachment polling data.

For example, as reported by Politico Feb. 19, California Rep. [score]Ted Lieu[/score] said, “A recent poll came out saying that 46% of Americans want the president impeached, and certainly members of Congress take notice.” The piece also reported that Lieu said, “A Democratic-controlled House of Representatives would impeach Trump.”

Clearly, that is the goal of all Democrats, but here is a little reality check for Rep. Lieu. The “recent poll” he referred to was conducted by Public Policy Polling. That is a liberal Democratic firm known for “troll polls” or “push polls” leading respondents to the desired outcome for insertion into mainstream political reporting. Moreover, while the Feb. 10 poll Lieu cited found that 46% of Americans were in favor of impeaching Trump, exactly 46% were opposed!

To quote back Rep. Lieu’s words, “Certainly members of Congress take notice” that half of Americans are opposed to impeaching the president, according to a heavily slanted Democratic poll.

Furthermore, People magazine’s website used this same poll in its Feb. 24 headline: “Americans Are Split on Whether They Want Trump Impeached – And More Revealing Polls” without disclosing the well-established left-leaning bias of Public Policy Polling. (Even Real Clear Politics displays a (D) next to any polls used in their polling averages.)

Even more troubling is how the Washington Post took a respected impeachment poll and reported its findings with extreme bias.

The column featured a Public Religion Research Institute (IPRR) poll indicating that while 58% of Democrats want to impeach Trump, only 27% of Independents and 4% of Republicans feel the same. But what “The Fix” conveniently ignored was an extremely salient paragraph from IPRR’s home page:

Despite concerns about unconstitutional actions, relatively few Americans believe Trump should be subject to impeachment proceedings. Three in 10 (30%) say Trump should be impeached and removed from office, while nearly two-thirds (65%) disagree. [Emphasis added]

In fact, IPPR’s headline read: “47% of the Country Say Trump Has Violated the Constitution, but Few Support Impeachment.”

Memo to the Washington Post: Neglecting to report that 65% of Americans oppose impeachment while showcasing that 58% of Democrats are in favor is blatant journalistic malfeasance. Perhaps instead of having your new Trump-inspired sub-masthead read: “Democracy Dies in Darkness” it should be changed to “Democracy Dies in Deception” to more accurately portray Post reporting.

With what I call the “Trump Impeachment Follies” in full swing, Republicans must be ready to wage war against Democrats and their media allies who are using deceptive tactics to indulge their impeachment fantasies against the will of the American people.