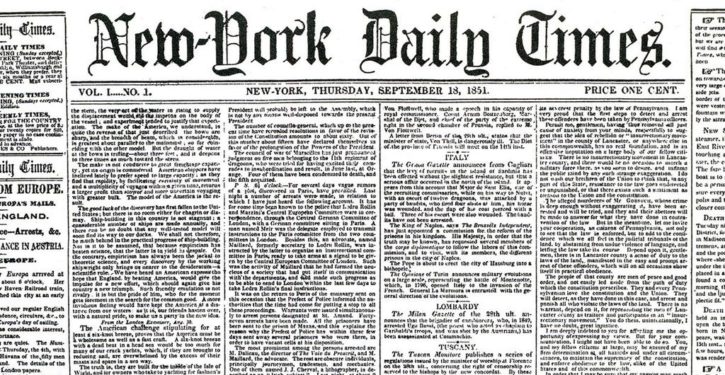 The New York Times has been around since 1851, when it was known as the “New-York Daily Times.” The paper was there to cover the Civil War and the two “Great Wars.” It witnessed the Stock Market Crash of 1929, the Great Depression that followed it, the assassination of John F. Kennedy, and the fall of Richard Nixon.

The Washington Post is nearly as old, having been founded in 1877.

Both of these journalistic giants have been in business long enough to know how far respect for them as “keepers of the flame” has plunged in recent years, as each of them has permitted itself to turn hyper-partisan.

But now, in the era of President Donald Trump, both papers have dropped all pretext of objectivity. Both are now allowing their writers to engage in snark. For those uninitiated, Urban Dictionary explains that snark is a neologism formed by combining “snide” and “remark.”

The Times’s snarkiness is subtle, appearing in a column by op-ed writer Charles Blow that argues that the Trump presidency should be placed “on hold” essentially until the “gathering fog of suspicion” around him can be cleared. Apart from being totally unfeasible — the Constitution contains no option for invoking a “timeout” during a presidency — the recommendation is also extraordinarily one-sided: Barack Obama was enveloped more than once during his presidency by similar fogs, yet a search of the Times’s archives yields no such article by Blow or anyone else.

But I digress. Back to the snark, which appears in the opening paragraph of Blow’s column:

The American people must immediately demand a cessation of all consequential actions by this “president” until we can be assured that Russian efforts to hack our election, in a way that was clearly meant to help him and damage his opponent, did not also include collusion with or coverup by anyone involved in the Trump campaign and now administration.

Did you notice that Blow’s use of scare quotes to surround the word president?

I grant you that Blow is an opinion writer, but the Times still has — or should have — standards when it comes to everything that appears in its pages. And while the powers that be at the Times may not like Donald Trump, they should be above allowing one of their writers to treat America’s commander-in-chief as though he’s a disgusting lab specimen so icky that he needs to be held at arm’s length, nose firmly clamped shut.

The WaPo pulls out all the stops in snarkiness in a sappy piece with the subtitle “What scares me the most about living with a Trump-run government.” What most scares author Daniel Drezner, a professor of international politics at Tufts University, is the administration’s crackdown on the flood of illegal immigrants into the U.S. Which is not quite how Drezner sees it. Here’s his impassioned first paragraph:

On Monday, the Trump administration will double down on its counterproductive Make America Less Safe executive order on immigration from certain Muslim-majority countries. This is merely the latest effort by the Trump White House to let the Customs and Border Protection (CPB), Immigration and Customs Enforcement (ICE) and every other Department Homeland [sic] Security-affiliated agency do whatever they want when it comes to border control. And they’ve already done a great deal that seems awfully illiberal.

Trump’s “Make America Less Safe executive order”? Is that what Prof. Drezner actually thinks it’s called? Whether you agree with him on the larger issue, is there anyone who believes that assigning a silly name to a rule you don’t like makes for a stronger argument?

I can appreciate that in the internet era, almost anything goes. Most newspapers even have online editions. But shouldn’t publications like the Times and the Post retain some measure of decorum that rises above the noise?

I don’t expect an answer to that question from the Left. But if I do get one, I assume it will include the epithet poopy head.