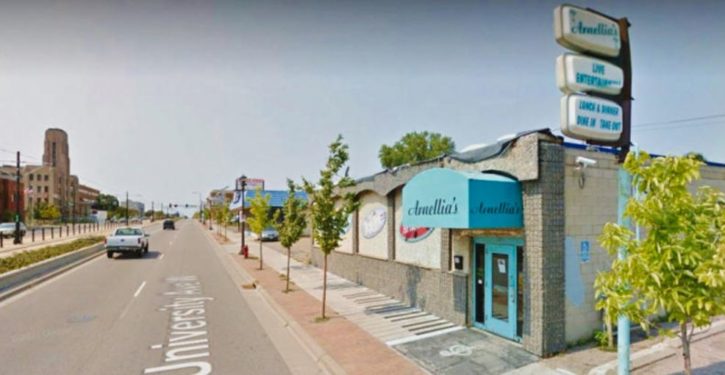 Aging feminist Gloria Steinem, who will turn 83 later this month, has an op-ed in The New York Times that laments the ongoing inequality between the sexes. Poor Gloria is evidently unaware of how much progress the “fairer sex” has made in proving they can do anything men can do — from officiating in the NFL to running for president to staging competitive burping contests.

Women have made so much progress that one forward-looking city, St. Paul, has taken to hosting an annual Smack Fest, for women only. Contestants take turns slapping each other in the face with an open as hard as they can. Last gal standing is the winner.

This year, sadly, things got out of control when a couple of contenders decided to “take it outside.” Amelia’s, the night club that sponsors the event, was slapped (no pun intended) with a fine, ordered to close temporarily, and lost its liquor license for 10 days.

The St. Paul Pioneer Press via the West Central Tribune explains that “the penalty, negotiated with city officials, stems from a Nov. 4 altercation between two contestants that took place in the bar’s parking lot following the all-female face-smacking contest known as Smack Fest.”

A woman reported that she was violently assaulted by a fellow competitor and her friends.

St. Paul police say they requested surveillance video a few days after the assault and the bar was unable to provide it within the required 48 hours. City officials noted that the failure to provide video constituted the bar’s third license violation in 18 months, which would normally incur a $2,000 penalty and a 10-day license suspension.

A settlement lowered the penalty to $500 and the bar was also allowed to pick the 10 days they would be closed, which will be the 10 days leading up to April 1.