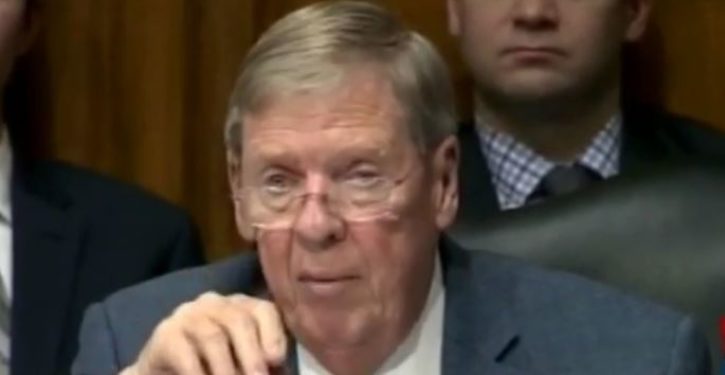 Lest you think that this demonstration of unconscionable behavior by “tolerant” liberals is one-off, I refer you to a story from 2014 centering on the race for Texas governor. Back then supporters of Democrat candidate Wendy Davis had no problem mocking Republican candidate Greg Abbott, who is paralyzed from the waist down as a result of an accident years ago.

The Davis campaign itself was not above ridiculing Abbott’s confinement to a wheelchair for life, even running an ad that showed an empty wheelchair. Get it?

Flash-forward to now, to another infirm politician. He is 72-year-old Sen. [score]Johnny Isakson[/score] (R-Ga.), and he suffers from Parkinson’s Disease. A group called Democracy Spring Georgia had planned to disrupt a fundraiser where the senator was slated to appear to shame him over this support of Donald Trump. According to the website:

It is time that Georgia tell their Senator that we aren’t going back on racial, economic, civil and human equality. We will not stand for a Senator who openly supports the least ethical person to ever sit in The Oval Office.

But the organizers decided to call off the march when they learned that Isakson had just been released from the hospital, where he underwent surgery to address “spinal deterioration.”

This infuriated those who had planned to demonstrate. One woman, according to The Daily Caller, commented, “Pretty sure he doesn’t have a spine anyway.”

Another is quoted as saying:

Because he cares so much about the difficulties his constituents are facing? A lot of which is related to our healthcare being taken away? And he refuses to hear our own concerns about health care? Wow, I won’t be going to the next one. I’ll take my protesting to groups that have more backbone than this one.

If the senator’s poor health was sufficiently inconvenient to generate this level of displeasure, imagine how furious the mob would be if he had up and died on them.