A poll out today from Morning Consult/Politico finds that a majority of Americans agree that Donald Trump is delivering on promises he made during the campaign. One of those promises that is now taking shape is the plan to slash the budget and staff of the bloated and — in the view of many — superfluous Environmental Protection Agency (EPA).

Trump will ask Congress to cut the EPA’s budget 24%, or nearly $2 billion, according to sources familiar with the budget plans.

The White House sent draft budget plans to agency heads Monday, detailing billions of dollars in cuts to a wide range of federal programs. Cuts to EPA and other agencies will fund a $54 billion increase in defense spending.

A source informed of the budget plans told E&E News that the president will push for a nearly $2 billion cut to EPA’s $8.1 billion budget. A source told Politico Trump also “proposed reducing EPA’s 15,000-strong workforce to 12,000, a level not seen since the mid-1980s.”

Trump’s plan to cut EPA’ budget dramatically mirrors recommendations given to him by the agency transition team. That plan advised cuts outside of state and tribal grants, which make up about 43% of EPA’s budget.

In that case, EPA will have to trim 24% from its $4.6 billion budget for federal programs, payroll and contracts. That‘s effectively a 42% budget cut once state and tribal grants are excluded.

Ebell said Trump will likely cut EPA climate programs, as he promised on the campaign trail, but could also end up laying off agency staffers in D.C. or reduce the size of field offices. Top officials told Axios to expect “massive, transformational cuts, particularly to climate-change programs.”

“Businesses have to do this all the time,” Ebell said.“The federal government never has to undergo this market discipline.”

EPA had more than 15,300 employees and a budget of more than $8.1 billion in 2016. About half of EPA staff work at regional offices across the country, even though more than 90% of EPA programs are administered by state agencies.

The Trump administration has said the budget figures sent to agency heads is not the full budget. The White house hopes to have a full budget put together by May

“This is not a full-blown budget,” Mick Mulvaney, the director of the Office of Management and Budget, told reporters Monday.

Mulvaney stressed current agency budgets plans were top-line numbers and don’t include entitlements or other programs that will be addressed later.

Mulvaney said the budget reflected Trump’s promises of rebuilding the military, securing the border, taking care of veterans and increasing school choice, adding, “We are taking his words and turning them into policies and dollars.”

The EPA did not respond to TheDCNF by the time of publication.

Which are the best and worst states to live in?
Next Post
Cartoon of the Day: Giving a new meaning to ‘trash talk’ 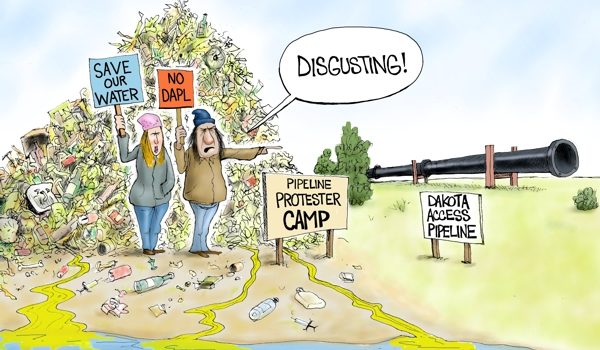