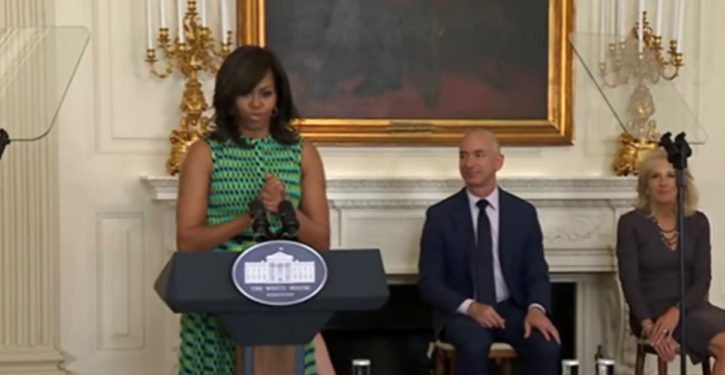 Amazon's Jeff Bezos is the principal honoree at a jobs-for-vets event hosted by Michelle Obama on 5 May 2016. Amazon made the biggest hiring pledge for Obama's Joining Forces Initiative. (Image: Screen grab of White House video, YouTube)

It would be easy to think the Washington Post just has the right combination of generic traits, and that’s why they’ve been the ones pumping out all the (laughable) themage from anonymous intelligence officials about Mike Flynn, phone calls, Russia, Trump, investigations, suspicion, chaos, fear, loathing, and yada yada yada.

Traits like reporter relationships with intelligence community personalities, right?  You could buy that.  Everyone’s there in the D.C. area, sitting on the same lunch stools.  Running on the same tree-lined paths.  Doing all that thriller-movie stuff on the leafy banks of the Potomac.

Of course, the other news organizations all have D.C. bureaus too.  They know people.

But, hey, it’s the Washington Post.  Woodward and Bernstein.  Ben Bradlee.  Katharine Graham.  So, OK, that was more than 40 years ago.  And if you paid attention during the Obama years, it seemed like the New York Times and NBC Universal’s properties were getting an awful lot of the leaked “scoop,” maybe even at the expense of WaPo.

But you could still kind of buy that it’s coincidental factors making WaPo the path of least journalistic resistance, for the torrent of themed propaganda coming out, we are told, from intel community officials.  These are obviously unhappy officials, taking arms against the Trump administration from inside the U.S. government.  Not only that, but at least nine of them were clearly in the Obama administration – something WaPo (perhaps unintentionally) clarified in its 9 February story explaining that all of those sources had primary information from the time Mike Flynn had the supposedly controversial phone calls with Russian Ambassador Sergey Kislyak.  Which was when Obama was still president.

The rogue officials behind the leaks are from the Obama administration.  You can certainly buy the deduction that they’d know reporters at WaPo, and would, in their unhappiness, “leak scoop” to them.  (Even though it never turns out to actually be anything, other than innuendo.)

But it’s really been noticeable that whatever the most sensational claim is, every couple of days or so, it’s that claim that ends up being leaked through the Washington Post.  The partisan-itch-scratching feel of it has become uncomfortably similar to the stuff pumped out by outlets like Debka-file and the “Ulsterman” — like it’s what you’d want to be true, if you desperately hated the Trump administration.  I’ve wondered myself if WaPo‘s editorial staff has been taken over by a Soros fellowship graduate on a mission, or if the paper has simply lost its bearings in terms of journalistic integrity and professionalism.

Now we have the reminder of a big clue, courtesy of Norman Solomon and RootsAction.org, at AlterNet.  I will stress up front that the editorializing above about WaPo’s reporting is mine, and not Mr. Solomon’s.  Please don’t go attack him over it.  He’s just the messenger for the clue, which is that the owner of the Washington Post, Amazon’s Jeff Bezos, has a $600 million services contract with…the CIA.

That’s what they call a kick in the head.  There are all kinds of things to say about the potential fate of news reporting in such circumstances, but in that respect, I don’t imagine our highly intelligent readers need to have the pump primed very much.

I will prime it to this extent, however.  The CIA is a special case.  What it’s paying for from Amazon is a 10-year contract to build and operate a private CIA cloud for data sharing and analysis.  Anyone experienced in intel community IT immediately recognizes that that means clearances and certain levels of access for the Amazon employees involved.  They don’t become spooks, by any means, but there’s a level of trust and embeddedness for the company, in its interactions with the CIA, that is sui generis in the industry.  It’s fair to assume that that affects Jeff Bezos’s perspective on a lot of things – and it makes Amazon most interestingly placed for, well, whatever someone might want to do to or through the CIA.  This arrangement with the parent company of a major news organization doesn’t give me a warm, fuzzy feeling.

It’s also fair to notice things that were noticed at the time Bezos suddenly jumped into news and CIA support, in 2013.

Interestingly, and controversially (due to widespread labor-activist criticism of Amazon), then-President Obama went to an Amazon warehouse in Tennessee that summer to introduce his new corporate tax plan – six days before Bezos contracted to buy WaPo (the latter on 5 August 2013).

2013 also happens to be the year Amazon got the cloud services contract with CIA.  After IBM challenged the procurement decision through the GAO, because IBM had put in a lower bid (see Information Week link above), Amazon filed suit in federal court to prevent bidding from being reopened.

The Amazon suit was filed 24 July 2013; Obama then appeared at the Amazon fulfillment center on 30 July.  Bezos announced the Post purchase on 5 August.  The court ruled in Amazon’s favor on 7 October 2013.

Circumstantially, again, Washingtonians noticed in January 2017 – last month, just before Trump’s inauguration – that Bezos had bought the “biggest house in Washington,” in the Obamas’ new neighborhood of Kalorama.  Up to now, Bezos and his family have lived in Seattle, where Amazon is headquartered.  Reportedly, the property in Kalorama – which has been a museum for years – is not ready to host residential living.

Make of that what you will; Jared Kushner and Ivanka Trump have bought a house in Kalorama too.  Kalorama is where many of the wealthiest or most connected Washington-area residents live.  But Jared and Ivanka have an obvious reason for buying a D.C. home.  And they don’t own the parent company of the Washington Post, nor do they have a uniquely privileged IT services contract with the CIA, now the source of so much anonymous sniping at the Trump administration.

Also circumstantially, as summarized at ZeroHedge in 2016, Bezos has it in for Donald Trump, who has publicly criticized Bezos and Amazon in very tough terms.  (A Forbes staff writer agreed, after the election, that Bezos has to be concerned about Trump’s very specific comments on Bezos’s ownership of WaPo, and its tax benefits for the unconventional Amazon business model.)

Norman Solomon pleads at AlterNet that the right thing to do, if the owners of news media are to have these contracts and links with government agencies, is for WaPo to put a warning label on any of its reporting that involves news about or leaks from the national intelligence community.

Not that NBC’s media properties necessarily made a practice of that during the General Electric ownership years, when GE had huge contracts with the U.S. government, and CEO Jeffrey Immelt had the entrée with the Obama White House, including a Jobs Council appointment from Obama.  But for integrity’s sake, that’s what should have been done.

Meanwhile, however, news consumers can certainly take account of the Obama-Bezos-Amazon-CIA link whenever they see the Washington Post retailing “news” from or about the national intelligence community.  I suggest taking such account forthwith.

CNN president says antagonism toward Trump boosting employee morale … but at what cost?
Next Post
Despite outrage from MSM and Dems over Trump’s deportation stats, they pale next to Obama’s 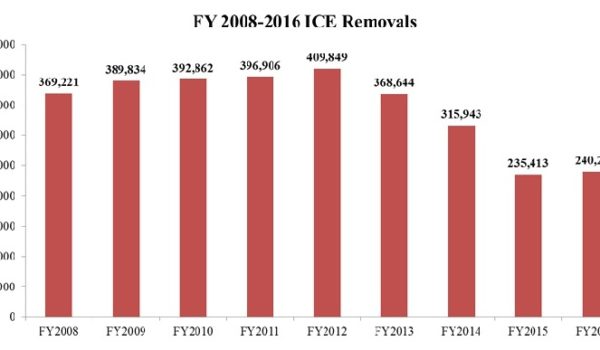