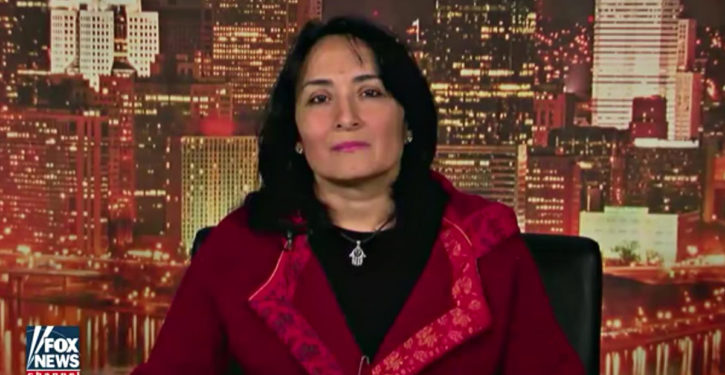 I wonder if this will get the liberal wingnuts to shut their yappers and stop complaining about President Trump’s immigration order. Probably not.

On Monday’s episode of “Fox & Friends,” Asra Nomani, co-founder of “The Muslim Reform Movement,” spoke out in defense of Trump’s executive order that temporarily puts a halt on immigration from certain Muslim-majority countries.

I’ve been a journalist for 30 years and I’m really disappointed that the media has unfortunately gone along with this meme #MuslimBan. It’s a propaganda campaign. In communications there is a term called agitprop, it means agitation propaganda. What we see right now is agitation propaganda from a very partisan political movement that lost the election. What I am really disturbed by is when I did a search last night of how many outlets have #MuslimBan in their headlines, they go everywhere from the New York Times to Slate magazine. It’s a disturbing trend where we are inciting fear and doing it very irresponsibly….

We know very clearly that there is an extremism problem that has been exported to the world that reaches the far corners of our societies….

Nomani continued by discussing the many difficulties facing the Trump administration now and worrying that the partisan attacks would only make keeping our nation safe more difficult.

Nomani’s views are echoed by Johnny Walker, an Iraqi Muslim, who worked very closely with American Sniper Chris Kyle and has battled extremism firsthand. Walker was asked to comment on the ban by the Independent Journal Review. He had this to say:

I agree 100% with President Trump’s decision. The national security of the United States is a paramount issue.

Look, these countries don’t have a database that keeps track of its citizens. And we can’t depend on a government database in countries that do, because if they have one it has a political agenda behind it.

It wouldn’t be hard for someone to get into the U.S. whose loyalty lies with ISIS or a militia aligned with Iran. While the militia isn’t necessarily our enemy right now, they don’t have loyalty to the U.S., they are loyal to the interests of the government that funds them. And that government says “Death to America.”

ISIS’s strongholds are in Iraq and Syria. We all know what they want to do to Americans.

Walker also added that all of the nations on Trump’s list had been overrun by terrorism and that this move was needed for national security purposes.

When asked about the claim that the refugee pause was racist or discriminatory, he replied:

What about all the other rich Muslim countries? They banned Muslim immigration from the very beginning. Saudi Arabia, the UAE, Bahrain, Qatar — are they racist, too?