In publishing its three mangled stories on Russian meddling in recent weeks, the Washington Post was not striving for magnanimity, showing other mainstream media standard bearers what not to do. But the effect was the same because all three reports flouted basic journalistic standards. In one case, the paper’s editors were forced to issue an embarrassing correction, while another has brought the WaPo face-to-face with a potential defamation lawsuit.

The problems with the reporting in the stories — Russian propagandists spreading fake news, the CIA’s assessment of Russia’s motive for hacking the election, and a botched report on Russians hacking a utility company — are as basic as failing to reach out to a major party or relying too heavily on anonymous sources. Let’s go through them one by one.

WaPo’s report Friday that Russian hackers penetrated the U.S. power grid has turned out to be false after new facts revealed that the electric company computer that was “hacked” was not connected to the grid and may not have been hacked at all.

Within two hours of the story’s publication, the electric company released a statement clarifying that the malware code was detected on a laptop not connected to the grid. It also came to light that anyone can download the outdated malware code online, and the whole thing could have been as simple as an employee using a work computer to visit an infected website.

Pretty amazing how badly the Post appears to have mangled this one. You didn’t call the Vermont utility regulator before publishing?

WaPo showed no indication that reporters reached out to the electric company in question before publishing the initial story, which was based on a tip from anonymous U.S. officials. Additionally, snapshots of the story at various points demonstrate it was heavily edited and significantly changed in the hours after it was published, but the editor’s note correcting the story was only added half a day later.

In a truly brutal autopsy, Forbes contributor Kalev Leetaru showed how over 11 hours, WaPo added a stunning ten paragraphs to the original eight, performed significant edits to the headline and focus, and did not update the article to indicate any changes had been made.

“This is significant,” wrote Leetaru, summoning media’s favorite new phrase, “as one driving force of fake news is that as much of 60% of the links shared on social media are shared based on the title alone, with the sharer not actually reading the article itself.”

A second recent WaPo story on Russian hacking is apparently based on one anonymous source with only secondhand knowledge of the story. Even liberal journalist Marcy Wheeler, who has extensive experience covering the intelligence community, said she thought the source wasn’t a CIA employee but rather a staffer in a Democratic senator’s office. WaPo cited this source as a “U.S. official” who was “briefed” on the presentation the CIA gave Senators — essentially a person who was briefed on a brief. The reporting falls short of what used to be the standard bar for journalism: two sources with firsthand knowledge of the story.

As the story on the CIA’s conclusion has developed, the reporting became almost schizophrenic, as confusing articles followed regarding the FBI first disagreeing, then agreeing with the CIA’s assessment, and basic questions regarding what exactly the CIA concluded remained unanswered. Two members of the House Intelligence Committee, including the chairman [score]Devin Nunes[/score], have publicly stated they have not seen evidence of this reported CIA conclusion, casting further doubt on the initial story.

Both the reports on Russian hacking made big waves in the news cycle and made the rounds on social media, proving powerful despite the dubious or outright false nature of their assertions. A third, earlier report on Russian propagandists manipulating American media resulted in a lawsuit threat from one of the media outlets involved in the story.

WaPo acknowledged a key part of the story exposing “fake news” sites taken advantage of by Russian propagandists might not be credible, writing in an editor’s note that the paper can’t “vouch for the validity” of a report heavily cited in the story. The report — from an anonymous group called PropOrNot — listed hundreds of sites deemed “routine peddlers” of Russian propaganda. WaPo used the report prominently in its story on Russia influencing the election by way of fake news.

One of the sites listed in the report as “fake news” quickly demanded a retraction of the story and threatened to sue for defamation in a demand letter, which prompted a lengthy editor’s note attempting to distance WaPo from the report. “The post, which did not name any of the sites, does not itself vouch for the validity of PropOrNot’s findings regarding any individual media outlet, nor did the article purport to do so,” the note running at the top of the story reads.

Although this story also made a splash, it was quickly criticized by other journalists. Adrian Chen called the report “a mess” in a sharply critical piece in The New Yorker. And Patrick Maines criticized the story in The Hill, calling it “perhaps the shoddiest piece of feature writing since Rolling Stone published its blatantly false story about a campus rape at the University of Virginia.” 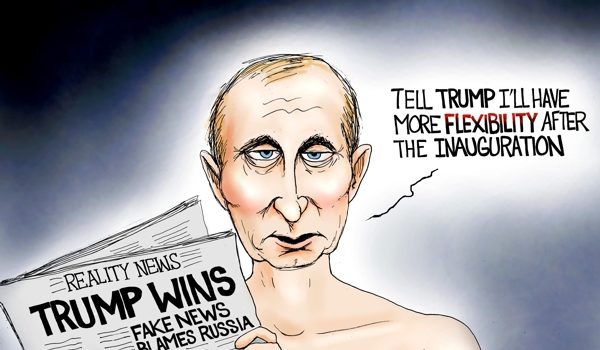